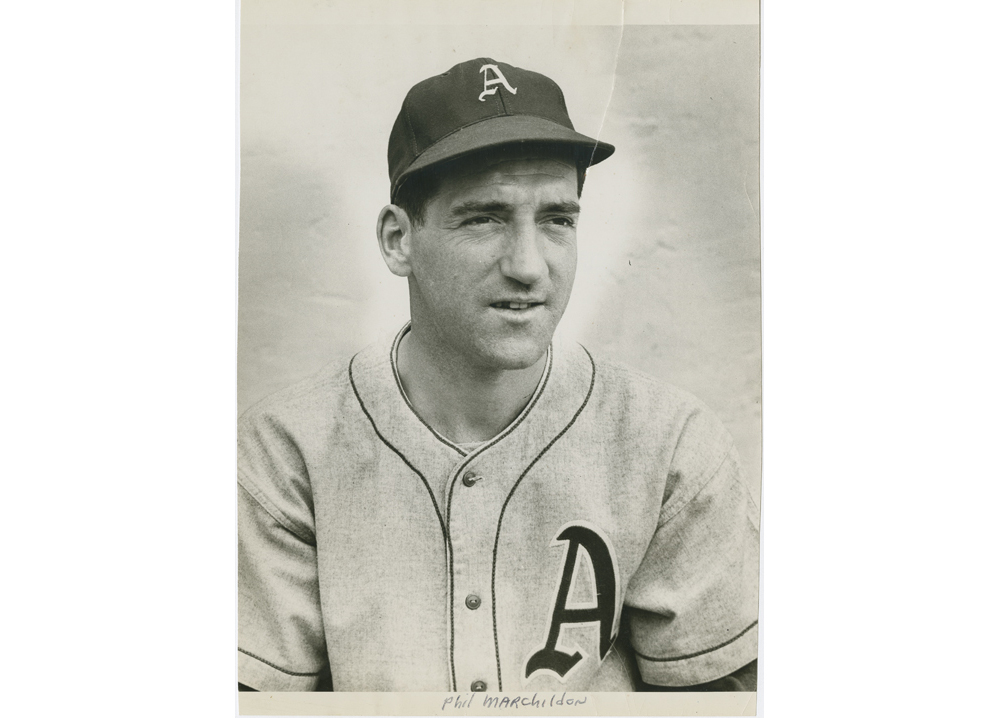 November is a month to remember the courage and sacrifice of our war veterans. Many soldiers did not return home. Others survived, but never fully recovered from the horrors of war.

This is the story of one unsung hero, Phil Marchildon, a baseball pitching star, Royal Canadian Air Force officer and prisoner of war who made a remarkable comeback to win 19 games for the Philadelphia Athletics in 1947.

As kids growing up in the Beach of the 1950’s we knew about sports figures in our neighbourhood. There was Ted Reeve (two Grey Cups with Balmy Beach), Leafs winger Sid Smith (two Lady Byng trophies) and wrestler Pat Flanagan (real surname Watson). All lived on beautiful Glen Manor Drive.

Marchildon was born in Penetanguishene, Ontario in 1913. At 24 he was working in the mines around Sudbury when he made the most of a tryout with the Toronto Maple Leafs of the International League. His lively fastball took him to the big leagues where he won 10 games in his rookie year and 17 games for the last place 1942 Athletics.

“Penetang Phil” was on the verge of stardom, but duty called and he traded uniforms for the rest of the Second World War. Marchildon headed back home to enlist in the Royal Canadian Air Force. He was offered a position as a fitness instructor and could have stayed in Canada, but turned it down. “I didn’t want people saying that Phil Marchildon, the big shot ballplayer, had taken the easy way out,” he writes in his 1993 autobiography, Ace: Canada’s Pitching Sensation and Wartime Hero, written with Brian Kendall.

Marchildon and hockey great Roy Conacher were inducted together into the Air Force in November 1942. Almost 100,000 volunteers, including my own father, went through the RCAF Manning Depot (the Coliseum) at the CNE during the course of the war.

The very first Hollywood movie shot entirely on location in Canada, 1942’s Captains of the Clouds (with James Cagney) depicts the actual RCAF recruits marching in front of the Coliseum building.

In Toronto on his way to further training in Halifax, Phil stopped for coffee one night in a Bay Street restaurant. He spotted a fellow air-gunner, Ken Patience, who was with his sister Irene. She had never heard of the star player, but sparks flew and Phil overstayed his leave. Irene promised to wait for Phil.

Memories of that week were bittersweet for Irene. She never saw her brother again. In May 1944 two Halifax bombers collided during a night raid over Belgium. All 14 crew members were killed, including Ken Patience. The Patience family lived in the Beach and Ken attended Williamson Road PS and Danforth Tech. He was only 21.

Once overseas, Flying Officer Marchildon had the perilous job of tail-gunner in the rear turret of a slow-moving Halifax bomber. On the night of August 16, 1944, his 26th mission, their plane was shot down by a German fighter over the Baltic Sea off the coast of Denmark. Marchildon and his navigator George Gill bailed out of the burning aircraft into the darkness, but the others never made it. Phil would forever be haunted by the memory of that terrible night, writing, “I keep seeing the faces of my five crewmates who didn’t survive the crash.”

Marchildon is credited with saving the life of his mate in the dark waters as they swam and drifted for hours until rescued by a Danish fishing boat. German soldiers captured the downed airmen and the two were sent to the POW camp Stalag Luft 111, scene of “The Great Escape” a few months before (March 24-25, 1944).

In the famous 1963 film The Great Escape, Steve McQueen sports a baseball glove and ball. With as many as 200 teams playing in the camp, baseball was more than a pastime and a way to stay in shape. Games helped disperse the sand from the tunnels and equipment hid smuggled contraband.

Toward the end of the war, the reality was harsh with poor food (sawdust in the bread and watery soup), illness and despair. Marchildon writes that he saw one Canadian ballplayer shot dead for stepping over the warning wire to retrieve a ball.

In January 1945, cold, hungry and sick prisoners were herded across the ruins of Germany in the infamous Death March. Marchildon had dysentery and lost 30 pounds. “My nerves were shot and I was a physical wreck,” he writes in his autobiography. The star athlete survived, but was never quite the same as “the war damaged my physical and mental health and cut short my career.”

His nerves were shattered from “the strain of all those missions spent flying over enemy territory through radar-controlled searchlights and anti-aircraft flak, the endless hours of searching the darkness from my gunner’s turret for the shadows of German night fighters.”

Back home that summer, Irene was waiting at Union Station to meet Phil. They married in November 1945 and raised two daughters, but adjusting to civilian life was difficult for Phil.

His war was over, but he couldn’t overcome the fear that something terrible was going to happen. He was frightened by the shadows and noises of Yonge Street and plagued by recurring nightmares and dark moods.

Less than four months after being liberated by British troops on May 2, 1945, the ace was coaxed into pitching on “Phil Marchildon Night” in Philadelphia. Rushed back, “Penetang Phil” hurt his leg that night, but recovered enough to win 13 games in 1946.

On Opening Day of the 1947 season Marchildon beat the Yankees 6-1 and went on to finish 19-9 in what he called his “magical year.” For the second time he finished in the top 10 in voting for American League MVP. In his career he pitched 82 complete games.

In 1948 Marchildon injured his shoulder and never regained his form. He played for Boston in his last major league game in 1950, then ended his pro career back with the Leafs. Phil and Irene bought the house on Glen Ames overlooking Williamson Road PS in her old Beach neighbourhood. He felt “life after baseball was tough,” but found work with the AV Roe Co. that produced Canada’s ill-fated Avro Arrow jet fighter. The family moved to Etobicoke and Phil died in Toronto in 1997. One of their grandkids was named Kenny.

What makes a hero? It’s not Spandex and a cape or superpowers. It’s ordinary people stepping up to the plate by showing courage in the face of adversity and fear.

We don’t have many movies about our own Canadian heroes, but here’s a story of an ace on the baseball field and in the air, and a story that should be told.

After the war a chaplain in a memorial service spoke of prisoners of war: “Their freedom in a measure lost, they fought on, doing their duty, twice over.”

Phil Marchildon was a Canadian hero. Lest we forget.

Thanks Brian, I usually write about films that have already been produced, but this is a Canadian story that deserves to be told on screen. It’s a great sports comeback (like “Fear Strikes Out”) as well as a gripping and tragic war experience. Enough with the constant remakes and superhero nonsense. How about a true story of a real hero who suffered from PTSD long before we ever heard the term? CBC, are you listening?

Thank-you for the great article about My Grt. Uncle. It would make for a great movie for sure, including his after war work on the Avro Arrow. Not to mention he almost stopped DiMaggio’s batting streak.

Thank you for this article Brian. Phil was my grandma’s cousin. Growing up she told me stories about “Babe” Marchildon, although she always called him “Bay”. My grandmother was older than him, and I think this must have been a familial nickname. I was under the impression that it was in reference to the fact that Penetanguishene was on Georgian Bay. Grandma even tried to send him care packets during his internment, but they never reached him. I have my own special memory of Phil. In 1993, at a family reunion he was tossing a ball around with my sons who were 2 and 4 at the time.

Definitely a story that should be told even if it took me this long to read it. Well worth reading and learning about this unsung athlete and war survivor. Amazing the resilience this man demonstrated. Thank you for this article.

I am Phil’s oldest daughter and I live in Burlington Ontario. I thank you very much for this enlightening article on my dad. This explains the way he was while I was growing up, since he never really talked about his life during the war. We learned more about his war experiences from his book, and from his navigator George Gill, than we did from my dad. My dad saved George’s life when they were shot down and George visited my dad every year on that anniversary to thank my dad until he passed away. Your article is one of the best I’ve read on my father. Thanks again!