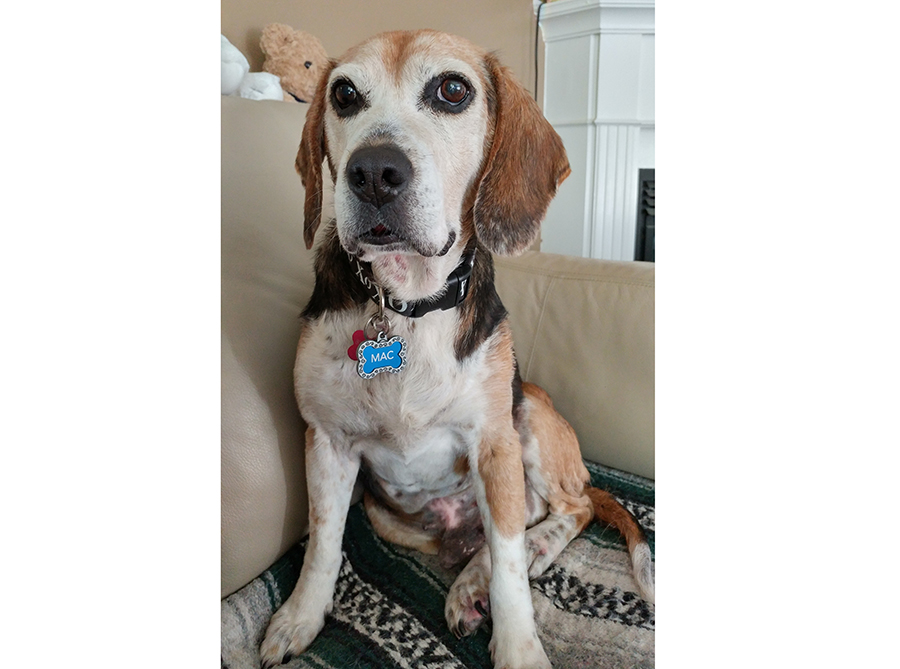 It’s hard to believe only a month ago, one might have mistaken Little Mac, aka Mr. Velvet, for a baby elephant. The roughly 10-year-old beagle was practically fur-less from the waist down, the result of a severe yeast and bacterial infection combined with a thyroid condition left untreated for years. These immune disorders also resulted in infections of the ears and eyes. But those beautiful eyes, along with his undeniable tail-wag potential were the very reasons we took a risk at a particularly rough time for us and howled out a resounding “Yes!” to Mac’s rescue. That and his soul-crushing story…

In September, we received an urgent email from our friends at Sit with Me Rescue in Ottawa. Tenants of a Gatineau apartment building had moved out but overlooked a couple things when packing. A young adult female pit bull terrier who was afraid of her own shadow and an old soulful-eyed beagle boy missing most of the fur on his backend were discovered in the vacant apartment. Fortunately, the forgetful tenants were tracked down and reminded of the items left behind. It came as little surprise they chose to formally surrender the dogs to the local animal shelter. This was a blessing especially since it meant rescuers who work closely with the shelter in such situations could act immediately for the sake of the dogs. The beagle needed urgent medical attention and his flat-mate needed confidence-building. We’re happy to report Mac’s old roomie eventually found rescue, too.

As for Mr. Velvet, he’s getting more velvety by the minute. He’s also getting more beagley. Could anyone in my line of work ask for more? Here are the clues…

Mac doesn’t like celery. He did, however, seem to enjoy the two loaves of bread he discovered on one of his counter cruising expeditions in his foster family’s home. Mac has learned how to use his big brown eyes to turn any possible scolding into an outpouring of sympathy. “I was just so hungry,” his eyes confess. Those eyes have also served to melt the heart of his granny who spoils him whenever mom and dad go out. There is nothing better to a beagle on the mend than a doting grandmother for a sitter. All she wants in return are cuddles and Mac is the ultimate cuddler!

Aside from casting love spells on his new family members, Mac is showing great promise as a yoga guru (see: bread stealing from the kitchen counter). But he doesn’t always stretch for evil. Mac just loves to stretch, plain and simple, and he can stretch to incredible lengths. If you should need a drawbridge from couch to floor, he’s your guy.

Last but not least, Mac can howl. This is something us beagle people fully expect and even admire…when the neighbours aren’t within earshot. But a typical self-respecting beagle at least makes an effort to hit the notes. Mac, on the other hand, is a sloppy impulsive bellower who doesn’t think it through. Either that or he’s tone deaf. No matter the reason, he really needs singing lessons. Mac sounds more like a prehistoric resident of Jurassic Park than a melodic hound on the hunt. It’s a tad embarrassing for the human at the other end of the leash.

Canine Idol or not, you’re probably wondering how we could have ever hesitated to give an adorable beagle like Mac a tail-lift. As I mentioned earlier, we threw caution to the wind for Mac. I wish we could be more like him and not need to think things through every time, but we do. It’s been a costly year for our beagle repair shop. We’ve endured numerous medical emergencies because we have this habit of rescuing the most broken down of beagles. Financial worries are constant for us. But in the end, that promise of a tail-wag always seems to win over our worried minds. In this case, it was Mac’s tail we wanted to see wag again. Not only is it wagging, but the fur is coming into bloom and a smile on the opposite end is doing the same. Results like that always make it worth the worries.

Besides, we’re going to wag those worries away on November 19th at our 12th Annual Beagle Bash For Cash. With the permanent closing of PawsWay in September, where we’ve held the Bash for the last several years, we had yet another thing to worry about. That’s until we discovered a fabulous beagle-worthy venue in the country. Just a Mac stretch east of Oshawa, we sniffed out our new pooch party palace –   K9 Central in Bowmanville, boasting both an indoor and outdoor play area.

It’s worth the drive! Every person with a heart of gold who joins us at this special fundraiser is going to make a difference – maybe not to Mac’s singing voice, but definitely to his gradually blooming tail and the extraordinary dog attached to it, and then they’re going to make a difference for the next broken tail that needs fixing and the one after that. Just ask Mac. Love stretches farther than you could ever think possible.

Little Mac is a roughly 10-year-old formerly bald (but soon to be in full fur) beagle at Big On Beagles Rescue, www.bigonbeagles.ca, facebook.com/BigonBeaglesRescue. Join Mac and his friends at our 12th Annual Beagle Bash for Cash on Nov. 19 from 1 to 3 p.m. at K9 Central in Bowmanville. Visit our site for details. All proceeds go towards bringing the wag back to down-on-their-luck beagles like Mac. All well-mannered dog breeds and their doting humans are welcome.