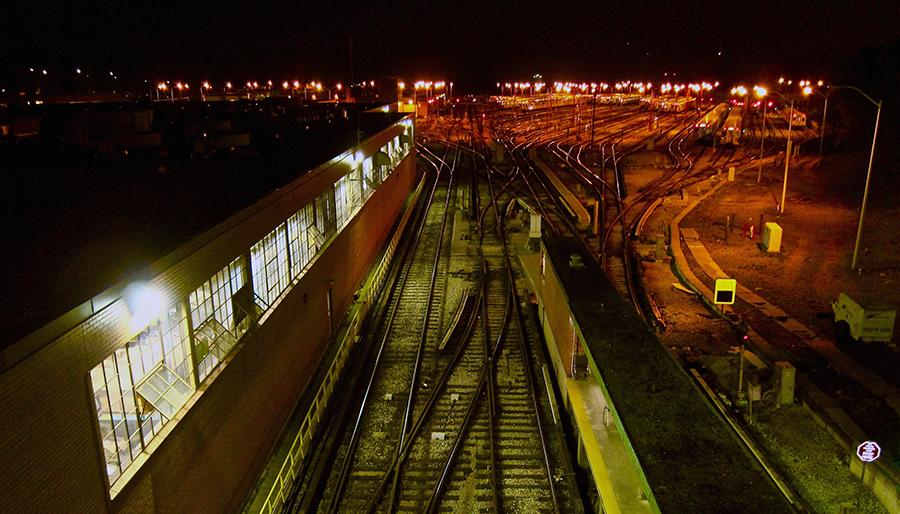 The 31-acre TTC subway yard on the west side of Greenwood Avenue was specially designed during the 1960s, likely at considerable cost to taxpayers, so development could take place above the tracks and storeys could be added to the buildings. PHOTO: Stephen Wickens

Where’s the best spot for that new police station?

After two October public consultations and with the clock ticking on a December site-selection vote at city council, the best answer is none of the above – at least for now.

A fourth site, the 31-acre subway yard on Greenwood Avenue south of Danforth, was nixed late in the shortlist process, though it appears nobody – including staff in the city and TTC’s real estate divisions – knew foundations for multi-use developments and additional storeys were built in by taxpayers in the 1960s, likely at considerable cost.

There’s a potentially scary story here for the whole city and, fittingly for the season, it summons the ghosts of R.C. Harris and Jane Jacobs, two of the sharpest people ever to tread Toronto sidewalks.

The Greenwood storage and maintenance yard was built to serve the Bloor-Danforth subway, which capitalized on Harris’s insistence five decades earlier that the Bloor viaduct include a subway deck. (Harris, a Neville Park resident, was Toronto’s public works commissioner for 33 years till his death in 1945; the water works on our eastern waterfront is named for him).

It’s likely that appreciative 1960s subway builders wanted to pay forward their good fortune, a posthumous thanks to Harris for foresight that reduced project costs.

TTC vice-chair Charles Walton, who grew up near Greenwood when it was a city dump, likely had a big hand in Greenwood decisions. The Riverdale Collegiate alumnus was a real estate specialist and was a TTC commissioner (1949 to 1968). When Greenwood was designed, real estate mattered seriously to the TTC’s mandate as a self-supporting business, and Walton was overseeing bids from developers hoping to build an office-retail-recreational complex atop the Yonge subway yard at Davisville.

It surely occurred to Walton that Davisville’s profit potential would’ve been far greater had it been designed a tad differently. Lessons were incorporated at Greenwood but the heirloom investment was forgotten.

The TTC’s real estate manager said he knew nothing about any investments in Greenwood foundations when I interviewed him for a 2004 story about transit lands for The Globe and Mail, but Ed Levy, long-time transportation planner and author of Rapid Transit in Toronto, did recall something. He tracked down (though not in time for that story) an April 1966 copy of U.S. railway magazine Headlights with a feature on Greenwood stating: “… consideration was given to the potential of development of air rights over the yard and shop. Steps were taken to permit such development should it become economically feasible. Tracks were located so that column construction would be possible without interference with yard operations and functions. Foundations and columns of shop buildings have sufficient strength to permit additional floors being erected at some future date.”

The Greenwood site may have problems, but it’s essential that all police-station options be thoroughly explored and explained. That’s especially so for people who care about the Danforth’s future.

Enter Jacobs’s ghost: Back before the Danforth East Community Association was formed in 2007, I was asked by some area residents to find out what Jacobs, the world-renowned urbanist and author (who died in 2006), might suggest for a street that had been in decline for decades. Surprisingly, she was very familiar with the Danforth and had strong views about where to focus efforts.

She said the late-20th-century exodus of East End industrial jobs had left the area too residential to support a rich mix of activities on the once-thriving street. More residential density would come as a matter of course, but we needed welcoming, walkable hubs at subway stops, likely with office jobs, services and cultural activities.

Getting feet on the sidewalks and eyes on the street for different reasons at different times of day would be keys to vibrancy and public safety, but she warned that within what would become DECA’s area (Main to west of Coxwell) we had only two suitable hub sites: The TTC site and the parking lot behind Woodbine station. In emphasizing the importance of the sites – especially Coxwell, which is larger than the much-fussed-over Honest Ed’s lands at Bathurst – Jacobs said firmly, “Make sure you don’t blow it.”

So, can a big-box cop shop be part of an open and welcoming hub at Coxwell? Possibly; we’re told it might take up only 15 per cent of the land. But given that stated police priorities include a 15-metre buffer and “defensibility hazards,” a station would make a rich mix harder to achieve.

Coxwell-Danforth is the most central and accessible spot for a new station, but more time and much more information are needed if we’re to properly consider all relevant factors and options. A good start would involve provisional master plans showing how mixes of specific potential uses might fit the entire site and connect with its surroundings.

Several residents who attended consultations (where police and city officials bragged about the years they put into studying sites) are asking me why the process was allowed to go on so long before the public was cut in. Some mentioned that none of this was raised in 16 months of Danforth Avenue Planning Study sessions.

Other have speculated the city is rushing to accept any use for Danforth-Coxwell in hopes of burying potential embarrassment from a secretive and restrictive late-1980s development-rights deal between the TTC and a private company named Martap.

It’s also worth noting that commercial real estate sources have told me the site should be worth at least $50-million to its owners – us, the public.

City bureaucrats and politicians at all levels have long been aware of how important the Danforth TTC lands are to the community, but many now wonder if years of activism aimed at bringing something special to the site may have been in vain.

Last week, a trio of residents associations (one of which I’m affiliated with) and the Danforth Mosaic BIA filed a request to delay matters, citing inadequate public information. In sum, there’s more at stake here than a site for a police station: This is a test of public consultation and possibly the first application of Toronto’s new approach to public real estate under a new city agency that isn’t yet officially operating (and remains a mystery to some city councillors).

Plenty to chew on besides leftover Halloween treats.

Stephen Wickens is a life-long East End resident and a semi-retired journalist. Connect with him on Twitter @StephenWickens1

This is a great article describing how we got stuck with bad decisions due to lack of transparency at City Hall. In order to make good decisions, we need all of the information in a timely manner; presumably the purpose of “consultations”.

All these so-called “consultations” are a farce. They don’t care what the public thinks. They only want to be seen to “consult” with you. Public meetings are to show what they have decided, not what somebody else might come up with.