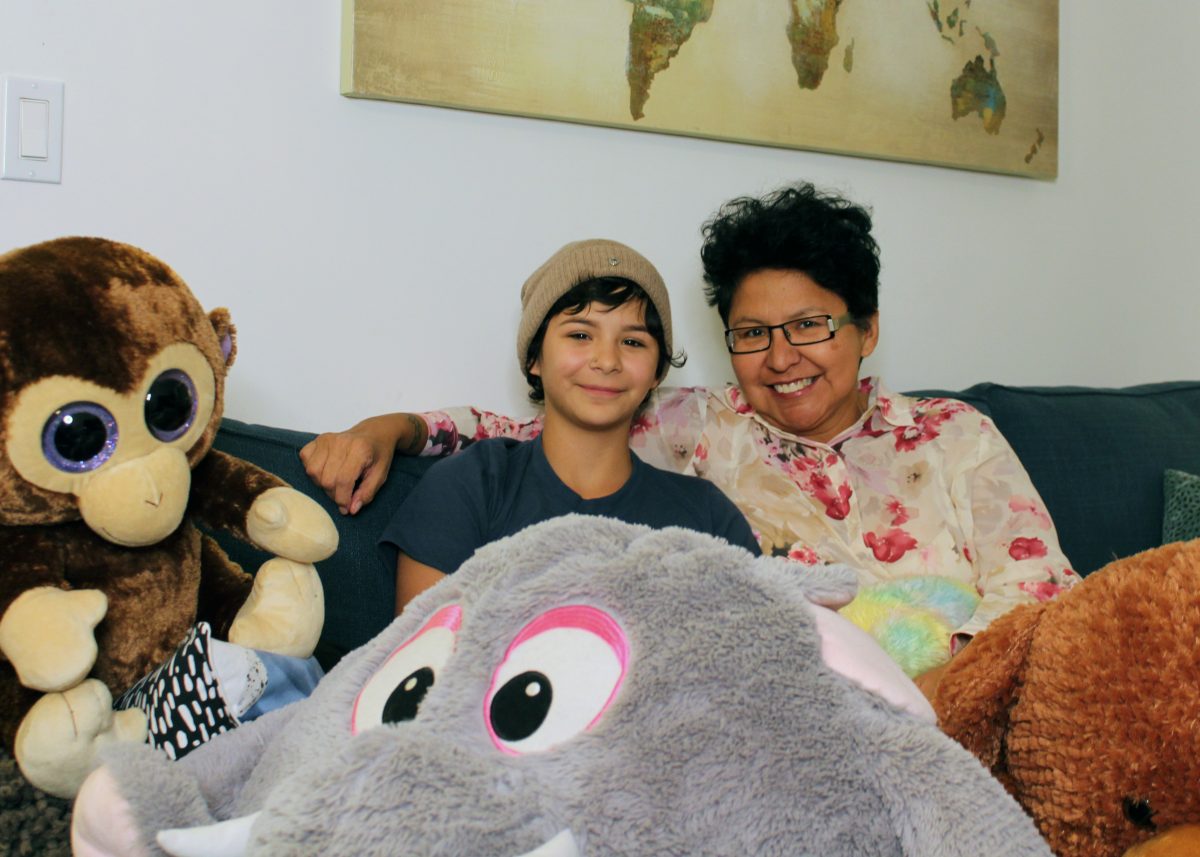 Elina and Dina Anker at their condo on Oct. 29 with gifts they received during Elina’s battle with cancer. PHOTO: Josh Sherman

At Dina and Elina Anker’s Oakridge penthouse condo, the elephant in the room is stuffed, pink, and grey. Last fall, it was cancer.

The toy elephant is one of a pile Elina, 14, received from well-wishers after she was diagnosed with stage-three lymphoma around this time last year.

The then St. John Catholic School student had been experiencing stomach aches and weight loss for months. Initially, doctors had mistaken the symptoms of her cancer for food allergies, irritable bowel syndrome and growing pains.

“Never did I ever think that she would have cancer—never,” said Dina.

And then, on Oct. 27, 2016, Dina and Elina got the news confirming the unthinkable. “Your body just goes numb,” said Dina.

Elina said the diagnosis “wasn’t really shocking” for her, and that she remembered taking the approach of “let’s just do this and I can go back to school.”

She began 106 days of treatment, including multiple stays in the hospital—the longest was six-and-a-half weeks—and several grueling rounds of chemotherapy.

“Chemo gives you a pain that’s not really like a pain that’s aching. Or, let’s say you stab your toe—it’s not that type of pain. It’s not like a headache pain, it’s more like a pressure, I guess,” Elina said.

The disease spread into Elina’s abdomen, bladder and kidneys. It also provided a lesson, one she would share with other kids who find themselves in her position.

“Pain is, like, it’s only temporary. You won’t feel it forever. There’s always ways to stop it, and friends always help,” said Elina, who recommends finding distractions. “When in doubt, ask for laughing gas,” she laughed.

Elina responded well to treatment at SickKids, and by February of this year she was in remission. What was going through her mind when she found out? “No more chemo,” she said. “I think I was just happy that I didn’t have to be in a hospital anymore,” she said.

As a mother, Dina had her own takeaways. Don’t read too much into what you find out online about the disease—every case is different. Do use the Internet to find support groups, though. Perform self-care.

“If you don’t take care of yourself, if you get exhausted or sick, then you can’t stay in the hospital and then you can’t be with your child,” she warned.

With Elina now cancer-free, the mother and daughter are all too aware that the outcome could have been very different. “Sadly, we’ve known too many children now that have passed away because you kind of become part of this cancer club of mothers,” Dina said. “The normal outcome is that the child will survive.”

Dina wondered aloud what the survival rate was for a moment then walked over to the fridge, still covered with hospital forms. “It says one in five children with cancer will not survive,” Dina said, reading a paper she retrieved.

Elina still has regular medical appointments to attend—down to every two months now. Always, the risk that the disease returns. Of childhood-cancer survivors, 60 per cent will face late effects from cancer, other impairments, secondary cancer, or sterility.

As Elina adjusts to school as a Grade 9 student—she started Malvern Collegiate Institute this September—she and her mom are thankful for the response from the local community, which included a St. John fundraiser that brought in more than $4,000 and saw some of her classmates shave their heads.

To anyone who helped out, from family and friends to the local church, Community Centre 55, and the Lions Club the mother and daughter have a message: “We appreciated every single bit,” said Dina.

They are trying to help out others. Some of the stuffed animals are going to new homes. “We’re finding a way to give it back to people,” said Dina.

Elina gave one of the toys to her oncologist as a birthday present. “I made some paintings in the hospital, and I gave her one of those,” she added.

For now, the elephant remains at their place.