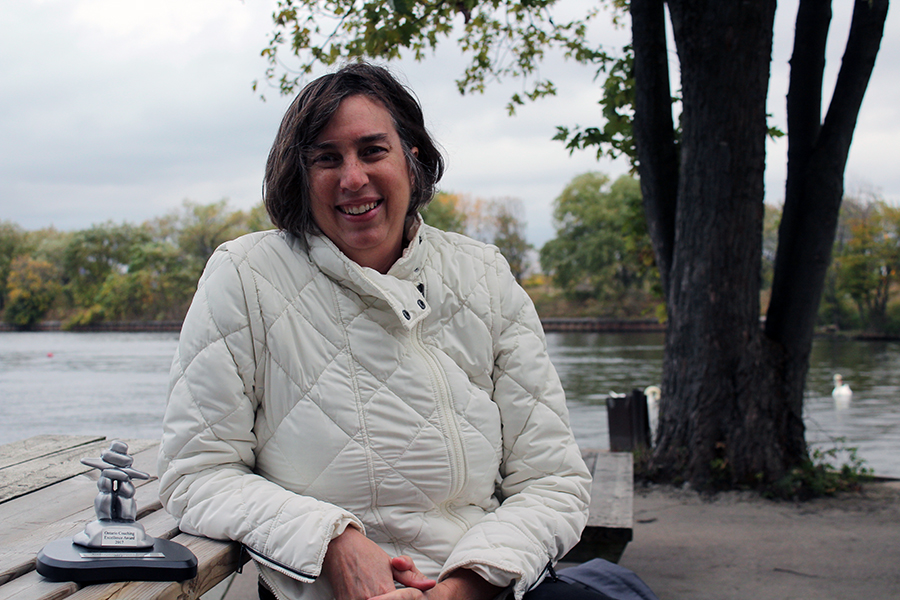 Some are shocked to learn they’ve won an award, others elated. Colleen Didur was hesitant to receive her Coaches Association of Ontario award.

It’s not that the Balmy Beach Canoe Club coordinator wasn’t happy about the distinction.

“I’m just out there doing quiet work, helping get people on the water and for those who are able to do more, you know, working with them in terms of getting them trained-up to race—whatever that means for that person,” Didur added.

As the coordinator of the lakeside club’s PaddleAll program, an initiative of Canoe Kayak Canada, the sport’s governing body, Didur coaches para athletes and those with intellectual disabilities in kayaking and canoeing.

“Any boat, any body” is the PaddleAll slogan, and it was Didur’s inclusive work that earned her the 2016 Everyone Matters Coach award. It’s an honour given to coaches who have “influenced the culture of their team, organization or community by embracing diversity,” according to the Coaches Association of Ontario. It is one of 10 awards the association presented to winners last month at a ceremony in Toronto.

“Through her dedication to create the PaddleAll program and commitment to athletes of all abilities, she continues to create meaningful opportunities for everyone to participate and feel part of a team,” said Susan Kitchen, the CAO’s executive director, in an email statement.

The award is Didur’s latest watersports accomplishment with the Balmy Beach Canoe Club’s PaddleAll program, which she set up in 2008 with long-time paddling partner Sue Stuart.

Didur got into kayaking and joined the Balmy Beach Canoe Club in 1999 because she was looking for “new and interesting things to do”—at least that’s “the short story,” the music therapist said.

When she started up the local PaddleAll program nearly 10 years later, Didur wanted to bring the sport to more people of all abilities. She also had a couple of specific goals. One of them was to help get a para-athlete from the Balmy Beach Canoe Club into the Paralympics.

Didur got to check that one off her list last summer, when club member Erica Scarff, coached by Mari Ellery, made the trip to Rio de Janeiro to take part in the para-canoe sprint event. She placed seventh in her class. It was the first time the sport had been featured in the international para-sport competition.

“We were very pleased with that,” Didur recalled.

Didur hasn’t been treading water since. She has already set her sights on the Special Olympics. “We would like to have canoe/kayak declared an official sport for the Special Olympics,” she said. To that end, Didur has been working to raise the profile of the sport, something she says is an important step towards getting it the official distinction.

Not every goal has to do with a prestigious event, and one of Didur’s has stayed the same since the start.

“Our secondary goal is just to share this sport with as many Canadians as possible and be as inclusive as possible, and just be as accessible for anybody who wants to race,” she said.

Congratulations Colleen! Very much deserved. Coaching takes many forms, but always starts with “I care” and you go from there. You can see Colleen in action in the CAO’s video tribute: https://www.youtube.com/watch?v=3Qfl2H4xim0&t=