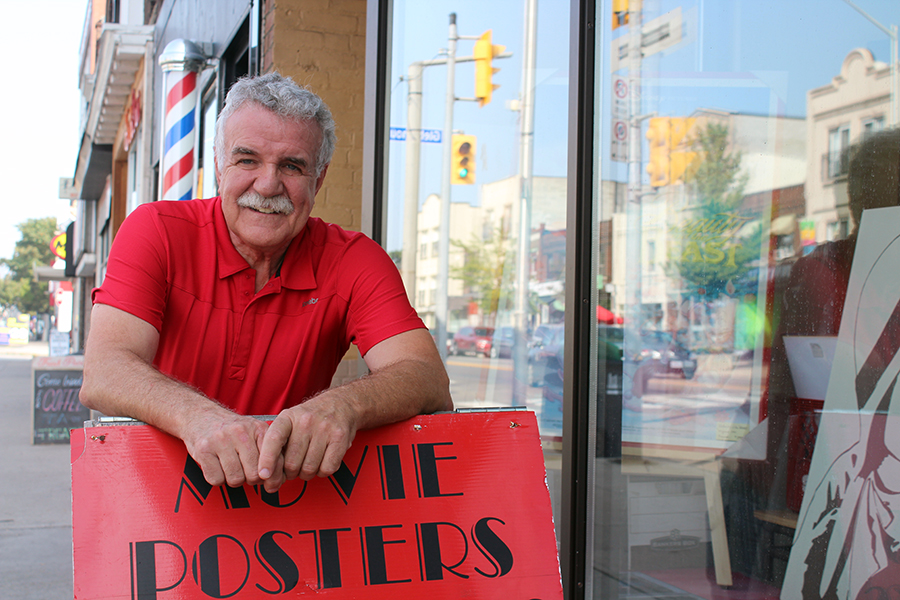 Hollywood Canteen owner Mike Orlando at his movie memorabilia store at 1841 Danforth Avenue on Sept. 20, 2017. About 20,000 film-related books and 5,000 movie posters are housed at the store. PHOTO: Josh Sherman

A self-described “maniac collector of things”, life-long east-end Toronto resident Mike Orlando says he owned a couple tons of movie posters before he decided to start the Hollywood Canteen, his now decades-old film-memorabilia business on the Danforth.

“I’ve been collecting since ’75, and just amassing great quantities of original movie posters from theatres and people throwing them out,” the 66-year-old entrepreneur said recently. “It was a time where it was strictly a hobby for me. I wasn’t thinking, ‘Oh, this will be a business one day or anything.’”

With the encouragement of his friends, the hobby became a business anyway. In 1983, Orlando opened the first Hollywood Canteen location in a 300-square-foot storefront on Queen Street East, just east of Woodbine Avenue. The poster shop operated there for about five years. “And then the hobby started to really grow,” Orlando said.

A move to Broadview and Danforth Avenues meant more space and room for the expansion into film-related books. These have become a defining feature of the Hollywood Canteen, which has been located at 1841 Danforth Ave. since December 2016 following 15 years at Coxwell and Danforth and a five-year stint in Mirvish Village.

Today, the 16,00-square-foot store is piled with books, about 20,000 of them. There are how-to books on filmmaking, biographies of directors and actors, pulp fiction, published screenplays—virtually anything to do with film. “We have the largest selection of film books in North America, both in and out of print,” Orlando said.

“Here’s probably the rarest book we have right now,” Orlando said, pulling an out-of-print hardcover copy of Murderous Passions: The Delirious Cinema of Jesus Franco from a nearby shelf. The book spans the work of cult horror director Jesus Franco. Online it is priced anywhere from $500 to $3,000, Orlando said. “The [publishing] company went out of business,” he explained.

Tucked in the same case, there’s a copy of the first book spotlighting American auteur Orson Welles, The Fabulous Orson Welles by Peter Noble. “It’s about $100, it’s not horrible.”

Sometimes, Orlando’s customers are as famous as the stars whose names line the shelves. On a recent Saturday, the Hollywood Canteen closed so heavy-metal superstars Metallica, in town for a gig, could peruse it privately. “They were wonderful,” Orlando recalled, pointing out a poster (one of around 5,000 in store) that the band signed.

“We had the Ramones when they were together as a regular customer. Liza Minnelli spent some time here. Tim Matheson from Animal House has been in and out,” said Orlando. The list goes on.

Often, Orlando keeps in touch with his celebrity clientele. “They end up giving you a want list, and then you try your best to fill that want list,” he said.

His search for silver-screen memorabilia has taken him overseas, and he draws on a vast international network of collectors these days, though he also hits up BMV and Value Village locations.

Orlando doesn’t know what will become of his collection, which also began in earnest with Humphrey Bogart posters, since none of his four children show interest in it. The plan is to keep the brick-and-mortar shop open for as long as he can—despite his accountant’s advice that he shutter the shop and focus on online business—and he’s happy to be back in the neighbourhood.

“What I like about it I can’t really put into words. I just have always felt very comfortable here,” said Orlando. On second thought, he adds, “That’s what I like: you’re so close to being downtown, but you still feel like you’re in a small town.”