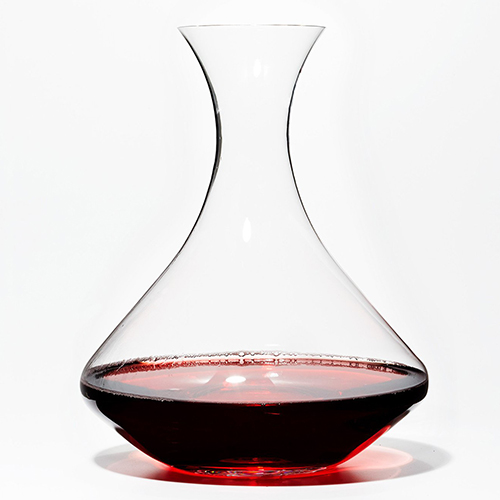 Breathing time and aeration allows oxygen to bring out the subtleties of the wine. PHOTO: Commons

When it comes to red wine, especially bigger styles like Cabernet Sauvignon, Bordeaux, Zinfandel, Syrah/Shiraz, Malbec, Italian reds, etc., breathing time and aeration is so important. Giving them air opens up the wine allowing oxygen to mix in bringing out the subtleties and nuances. You’ll smell and taste much more. It also helps soften the tannins somewhat. You can simply open a red wine and let it stand for an hour or two to aerate. However, as the opening in a bottle is about the size of a dime, decanting the wine into something with a larger surface area speeds up the process and does a better job.

For those in a real hurry to get at the nectar of the grape, there are other mechanical aerators that can be used to bring the wine around quicker.

One very popular style is the “handheld”. This one is held over a glass of wine and the wine poured through it. These generally have a larger bowl and several chambers that the wine goes through before it hits the glass. The wine often makes a funny gurgling sound as it passes through the aerator because of components within the unit. They’re portable and do a nice job of opening up the wine and softening tannins.

Then there’s the “in-bottle” version. This unit fits into the mouth of a bottle and the wine is poured out through it into a glass. It controls the amount of wine coming out of the bottle through a small bowl at the tip allowing a small amount at a time to filter through. The bowl mixes the wine with oxygen, so make sure that, if you purchase this style, it has a bowl or it won’t be very effective.

A third style is the “in glass/decanter” version. These sit right in the opening of a decanter or glass. Somewhat similar to the handheld, it’s a lot less work. In a decanter, the wine actually gets double aerated…once through the aerating unit and again in the decanter.

All three work equally well allowing you to experience more aromatics, flavours and softer tannins to a degree. In fact, a study found that one trip through one of these aerators was easily equal to 30 minutes sitting in a decanter. As far as which one to get is up to you. The “handheld” is perhaps most portable.

A couple of interesting things to note about these aerators! Having experimented with them extensively, I found that these units don’t work particularly well for mature wines. The process speeds up their evolution and they seem to die in the glass very quickly. I’ve also found that they seem to make a particular varietal stand out in blended wines like red Bordeaux or Meritage.

It’s extremely important to note that any form of aeration is no substitute for natural, bottle aging. If a wine needs several years to develop and evolve, no amount of breathing time or aeration device will change it.

The wine may definitely appear more open and softer, but any further nuances or complexity will need time in the bottle to develop.

In my mind, there’s nothing quite like decanting a big red to let it breathe. Although time-consuming, it’s sophisticated, looks great and does the job naturally. However, if you choose to use one of these artificial aerators, they’re definitely fun toys that will make your wine taste better quicker.