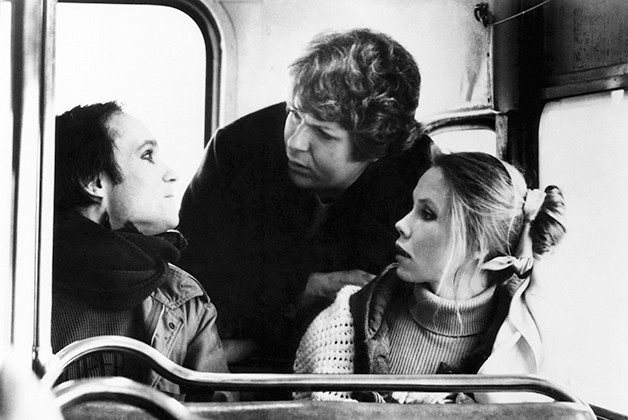 Have you ever felt like an outsider? At some point in our lives many of us just don’t seem to “fit in”.

Outrageous (1977) is a Toronto indie film with a small budget and a big heart. It tells the story of two outsiders who come together to try and make their way in a society that labels them as “abnormal”.  Robin (Craig Russell) is a gay hairdresser who wants to perform as “the best female impersonator ever”. Liza (Hollis McLaren) struggles with mental illness after running away from a psychiatric hospital. Both live in their own worlds of fantasy.

The film is adapted from the semi-autobiographical short story “Making It” in Margaret Gibson’s The Butterfly Ward (1976), a collection of stories about “madness” which won the City of Toronto Book Award in 1977. For Gibson writing was her lifeline. She needed words:

“Robin, if a caterpillar was afraid of wings, it would never become a butterfly and people would look at it and say, oh, look, there’s a worm on a tree, but they’d never see it spinning colours into the air.” (Liza in Outrageous)

Russell and Gibson really did live together as friends in an apartment on Yonge Street. The two met at West Hill Collegiate before Gibson was first institutionalized at age 15 with a diagnosis of paranoid schizophrenia.

Russell more or less plays himself as Robin.  He was born in 1948 as Russell Craig Eadie. His father Russell ran Beach Insurance Service on Kingston Road and the family lived on Hambly Avenue. When Russell was small the Eadies moved out to the Scarborough suburbs.

At high school the two were like the shunned outsiders in Mean Girls (2004).

“When I was 14 I looked in the mirror and I said, ‘Admit it, Robin, you’re different.’” (Robin in Outrageous)

As a teenager Russell adored the musical stars of the Golden Age of Hollywood. He started a Mae West fan club and took a bus to Los Angeles where he became West’s personal secretary for a time.  When he returned to Toronto he worked as a hairdresser and in 1971 began performing in “drag” clubs imitating the singing styles of his idols like Judy Garland, Carol Channing and Barbra Streisand.

Outrageous was one of the first gay-themed films to receive a wide-release in North America. It was the talk of film festivals in Toronto and Cannes. In Berlin, Russell won a Best Actor Award. At the Virgin Islands Film Festival, he won both Best Actor and Best Actress Awards.

Outrageous was daring for its time. In the 1970’s gay actors like Rock Hudson were still “in the closet” afraid of hurting their careers as romantic leads. Outrageous was the first commercial success to have a gay character played by a gay actor.

It’s 2017 and the movie industry has made some progress. Moonlight (2016) won the Best Picture Oscar, yet there was still controversy over one gay character in a Disney movie, this year’s live-action Beauty and the Beast. It’s also time to break down the stigma of mental illness. Halfway through the film, Outrageous seems to forget about Liza and focuses on the show business story of Robin trying to “make it” in New York City. If only it were as simple as Robin says to Liza, “Honey, everybody’s crazy. The trick is… make it work for you.”

Craig Russell went on to some fame as a performer, but struggled with his own demons. Happy endings are for Hollywood romances. He died in 1990 of an AIDS-related stroke.

Margaret Gibson was an obsessive writer, once saying “words were all I really had…it was enough.” She wrote a number of books between bouts of illness. Director Claude Jutra chose her story “Ada” for a television movie in 1976.

Her custody battle for her son was the basis for the film, For the Love of Aaron (1994). Gibson lived for many years in community housing on Coxwell Avenue near Gerrard Street East. She died in 2006.

Last year Pride Toronto borrowed the theme “You Can Sit with Us” from Mean Girls (with scenes at Malvern C.I.). As part of Pride Month, Harbourfront’s Free Flick will present Hairspray on June 21 at 9 p.m.  The 2007 musical version starring John Travolta as Edna Turnblat was also filmed at a number of East Toronto locations, including Eastern Avenue.

Hairspray is about a girl who wants to integrate the Corny Collins Show in 1962 Baltimore. The story mirrors an actual 1959 racist incident at a Buffalo TV show where a black Malvern student on a field trip from Toronto was not allowed to dance with a white girl on camera. Do any fellow Malvernites remember this?

These movies share a message of self-acceptance, equality and tolerance. Everyone should be able to dance to their own rhythm. What a boring world it would be if everyone was the same. We can welcome all colours of the rainbow and let butterflies roam free.