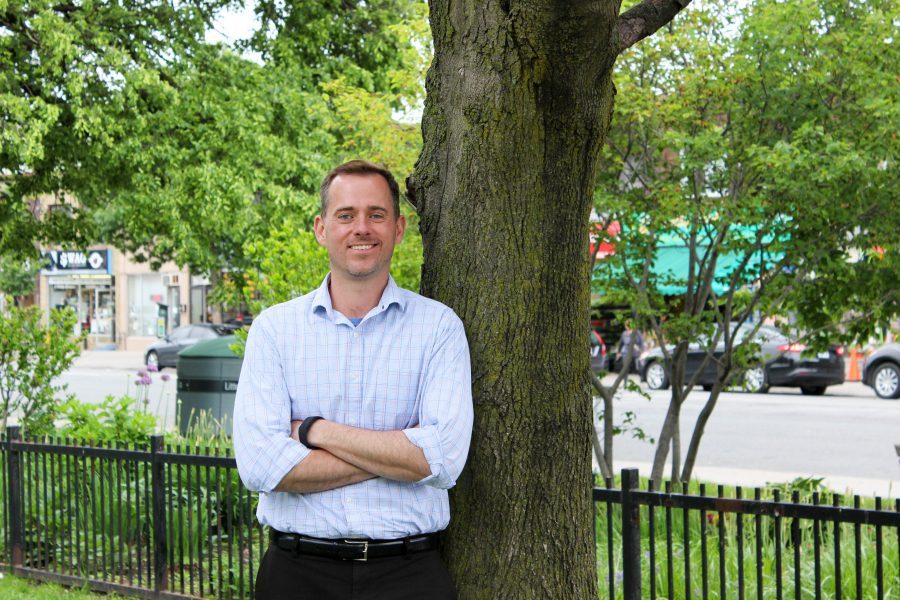 Michael Rusek is a leader both on and offline in the Danforth and Woodbine community. PHOTO: Sophie Sutcliffe

For a man whose name is recognizable as that of a leader in the East End community, it might surprise some to learn that Michael Rusek was not entirely excited to move to the area. At the time, four years ago, he and his now-husband, Eric, shared an apartment in Midtown, with Rusek commuting back and forth from Ottawa, where he was working for the federal government.

But one day, Eric put his foot down.

“He said, if we’re going to live together you can’t spend most of your time in Ottawa,” said Rusek. “So that’s when we decided that we were going to look for like a house and put down roots.”

Rusek said that they chose the Danforth and Woodbine area mainly because it was what they could afford in Toronto.

“We were kind of dreading coming out this far, because, at first glance, it’s quieter, it’s slower, it’s a lot less of a bustle than midtown. But the problem was that what we could afford and the housing market intersected here,” said Rusek. “The first couple of weeks we were sort of apprehensive … But gradually over time we’ve come to love this area. I wouldn’t want to live anywhere else.”

Rusek now runs a 6,500-member strong Facebook group for the Danforth and Woodbine community and is active online – and off – in a number of ways, including championing members of the community in a new “Selfie Stick Interview” video series, including Beach Metro News columnist Stephen Wickens.

“I’ve done five of them so far, there’s a whole bunch more that I’ve got in the works,” said Rusek. “I have to get around to just editing.”

Over the past year, he has also become more active in the Danforth East LGBTQ+ community.

“We do a lot of social media type things, but we also do a lot of events in real life,” said Rusek, who is also involved with the New Circles Community Services, a group which helps newcomers to Canada in the area. “We have a regular series of community dinners and community pub nights, we’ve had different rallies for different causes, we have different events that we organize through the Facebook group.”

Rusek said he got more involved with the local LGBTQ+ community after another member of the community’s pride flags were torn down.

“It was sort of, not in keeping with what we had learned about the area…. So we wanted to do something, [not only] for him, but also for ourselves to kind of reassure ourselves that this wasn’t an area that tolerated that kind of activity,” explained Rusek. “We had a rally for him and we had a night out at the farmers’ market, and we made sure that he was able to come…. And that kind of spearheaded this community that we started to build both online and in real life. So it took off from there.”

Rusek, who manages to maintain all these community activities while working as a lawyer for the Ontario Motor Vehicle Council, said that if it weren’t for the area itself, he likely would not be so involved in the community.

“Here, you’re friends with your neighbours and you’re friends with the shopkeepers – and that feeling of community naturally makes you want to get involved. And I’m not unique in that at all. Anybody from any of the other agencies like DECA (Danforth East Community Association) or the BIA, has also experienced that, where, you get involved because you like your neighbours and your area,” said Rusek. “I think that this is probably one of the best areas in the city to live in for exactly that. Just because we do have such a strong community… And that’s why I like being a cheerleader for this area.”

This story has been updated to remove reference to the DECA Pride group, which Michael Rusek is not involved with.