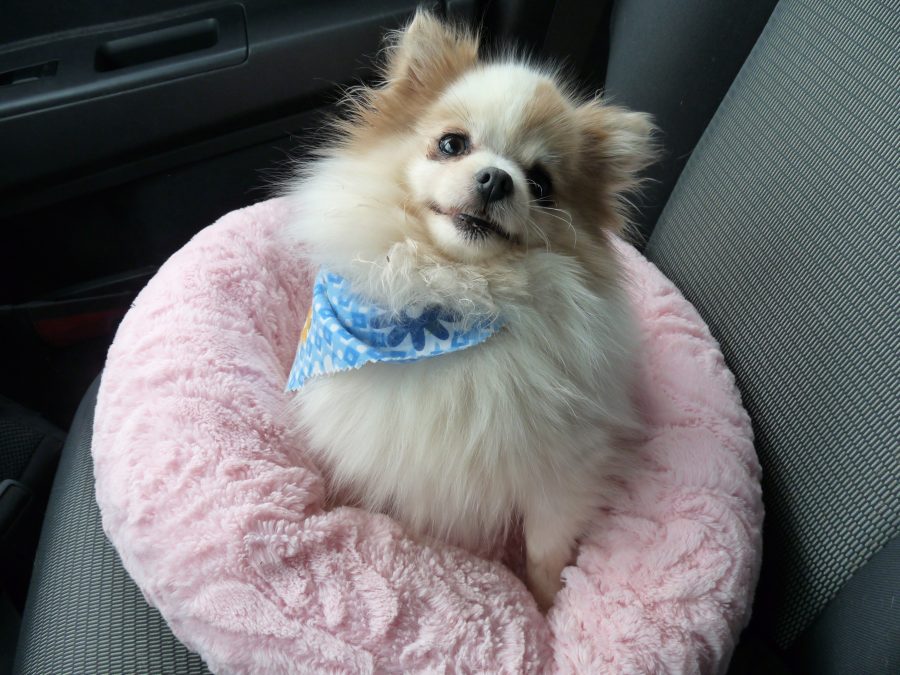 Before I tell you all about this adorable little fluff-ball, I have other good news from her caregivers at Sheba’s Haven Rescue.

In my last article showcasing the heavenly Haven nestled just north of Kingston, I confessed that one of our beagles residing there was a bit of a kleptomaniac. It seemed among the many pilfered treasures skillfully hidden somewhere on the property courtesy of Mickey “Light Paws” Malarkey was one very expensive leg brace custom-made for sweet YoYo – a fellow Haven resident. It had gone missing over the winter of 2015-2016. At the time of my article last spring, it had yet to be uncovered. By the first snowfall this past November, the search was called off for good and another unsolved case involving our Usual Suspect was shelved with heavy hearts. But alas, after nearly two years missing, this spring’s thaw uncovered a miracle in the form of YoYo’s leg brace! Of course, YoYo has moved on to a snazzy new and improved artificial appendage, but we can still celebrate its return. Any evidence of the perpetrator’s paw-prints are long gone which means Mickey and I are no longer in the proverbial doghouse for Grand Theft YoYo!

Enough about missing legs and beagles blamed, it’s time to showcase an angel who could never steal anything but your heart! As sappy as that may sound, she deserves the accolade. Maybe the mailman wouldn’t necessarily agree, but everyone else is totally on board!

It was only a few weeks ago the approximately 5- to 7-year-old Toy Pomeranian was brought to the local humane society. She was supposedly found a stray…speaking of unsolved mysteries. The person who claimed they found her said she didn’t seem able to walk. When the shelter veterinarian examined her, it was concluded the issue was likely neurological. This wasn’t a happy conclusion. But before giving up entirely, the vets decided to put her on an anti-inflammatory and crossed their fingers. This is when the second miracle in this article makes its appearance. Our little girl with the seemingly delicate disposition turned out to be one tough ball of fluff! Slowly but surely, she started doing the Pomeranian prance.

With hope on the horizon, the shelter staff gave her a cute name and quickly contacted Sheba’s Haven to see if they had space to take over her care by running medical tests and monitoring her progress in a peaceful home setting. Newly named Beatrice was in luck. Faye, foster parent for the occasional small breed waifs taken in by the Haven, was ready and willing to welcome another homeless half-pint to her tiny team.

Miss Beatrice, lovingly nicknamed BeBe by her Aunty Faye, is doing wonderfully. A series of blood tests came back normal, leading the Haven’s vets to believe this is likely a case of Vestibular Disease. Most common in older dogs, it’s described as a sudden non-progressive disturbance of balance. To the untrained eye, it can be mistaken for something life-threatening like a stroke or brain tumour. Fortunately, these incidents tend to improve quickly with supportive care and treatment. In Beatrice’s case, she appears to have made a full recovery so the plan is to monitor her progress over the next two months. If she doesn’t have another episode, she should be deemed adoptable.

In the meantime, BeBe is spreading the sunshine no matter how much rain has been in the forecast. She loves people (with the exception of postal workers). She loves dogs. She loves food. She loves play. Heck, she loves practically everything! It’s hard to imagine given the state she was in at the time of rescue, but Faye is absolutely convinced her newest foster pooch would also love the sport of agility if given the chance. Border Collies got nothing on the mighty Beatrice. She’s already proven herself an excellent Alert Dog. One of Faye’s permanent pooches is a 14-year-old Chihuahua named Tiki. Beatrice is Tiki’s self-appointed bodyguard. Her services are especially required in the middle of the night…naturally. This is usually when Tiki desperately wants up on the bed so Beatrice swings into action by jumping up on the bed, sitting firmly on top of a sleeping Faye, swooshing her fluffy tail in Faye’s face until she wakes up with a mouthful of fur, finally getting the hint Tiki needs emergency air-lifting. Another crisis averted thanks to Super Bea.

Despite the unsolicited late night wake-up calls, Faye is going to find it hard saying bye-bye to BeBe. But if she gets the thumbs up from her medical team, Beatrice will be ready to spread the sunshine even further in this world and Faye would never get in the way of that. It would be a win/win situation and that’s what it’s all about. No surprise Faye is a huge supporter of the Haven’s work in more ways than one. Aside from being a fabulous foster parent, Faye is the mastermind behind some pretty PAWSome fundraising events for her beloved rescue. Next on her agenda – Bark and Wine.

So let’s toast to Beatrice’s future…literally! Thanks to Faye’s party-planning proficiencies, the dog-loving folks at Three Dog Winery are happily teaming up with Sheba’s Haven Rescue to invite you to a fun-drenched fundraiser on Sunday, July 9. Come wine and dine (with your pooch) at this picturesque winery in Prince Edward County. All proceeds go to Sheba’s Haven in support of its incredible care of deserving dogs like Beatrice. Take it from BeBe (and Faye for that matter), there’s no better pick-me-up for the soul than a little hair of the dog.

Beatrice is a 5- to7-year-old Toy Pomeranian loving everything and everyone at Sheba’s Haven Rescue. She’s ready to love you too. To learn more about Beatrice and the upcoming Bark & Wine fundraising event, visit www.shebashaven.ca or email shebashaven@kingston.net.