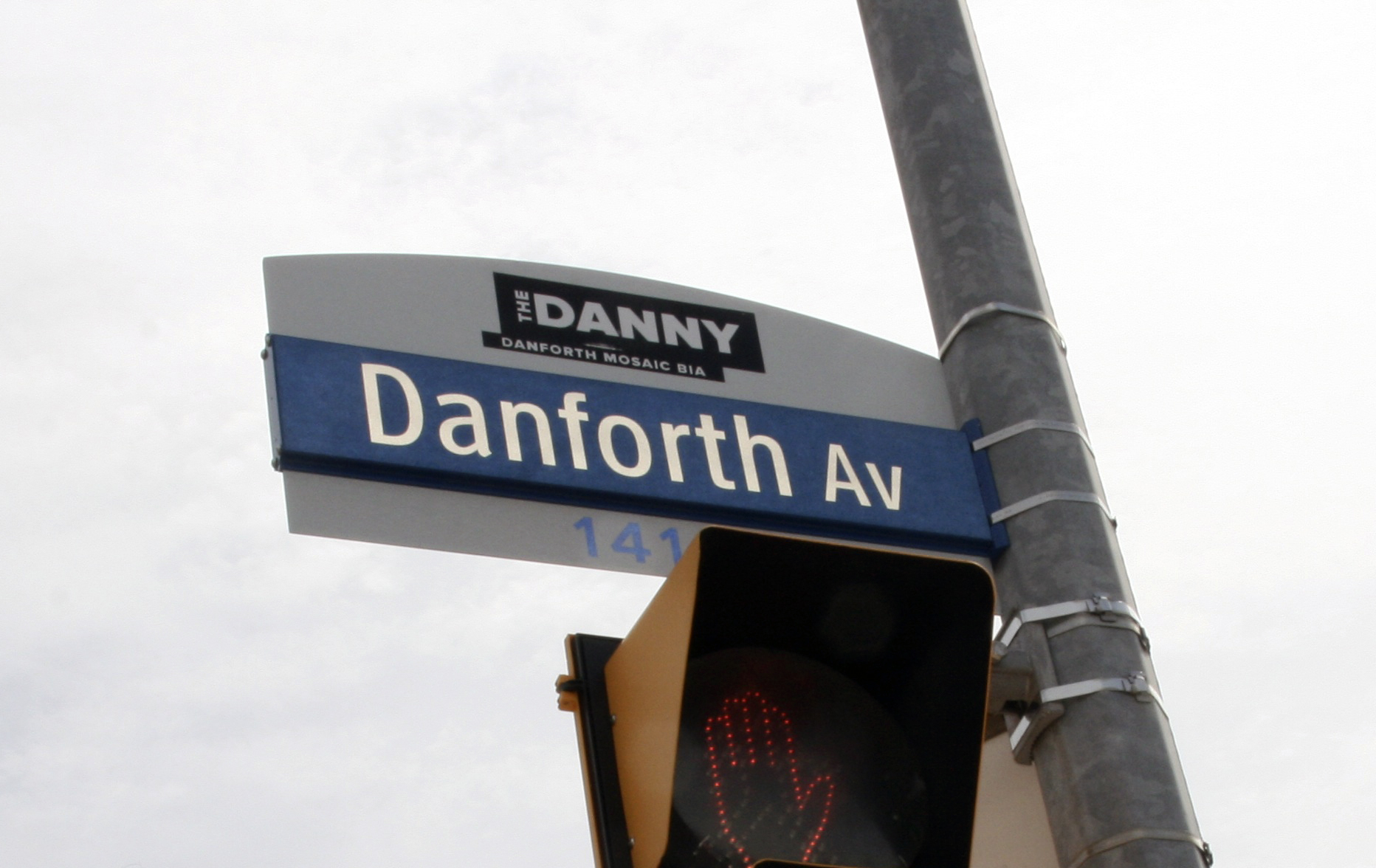 Veterans of the Beach-versus-Beaches wars need never be asked, What’s in a name? But it’s different north of the tracks, even if roses smell as sweet and the need for identity matters as much.

New street signs went up last month on Danforth Avenue between Westlake and Jones. They proclaim the Danforth Mosaic Business Improvement Area’s 2.7-kilometre strip “The Danny”, part of a campaign launched in 2015.

There’s been criticism online, but dissent has been tame compared with the near torches-and-pitchforks outrage on Queen Street East – within hours – when signs with the words “The Beaches” appeared between Bellefair and Hammersmith in August 1985. (They were removed soon thereafter.)

Another skirmish, in 2006, was relatively civil, but still attracted citywide media attention. (It was resolved with an online poll that chose “The Beach” for the current signs.)

“There has been some pushback,” Danforth Mosaic BIA chair Billy Dertilis admits.

“But our sense of neighbourhood and identity on the Danforth has never been as developed as what you see on that stretch of Queen,” says Dertilis, owner of Red Rocket Coffee. “On Queen, there’s a much stronger sense of history as a distinct or even separate part of the city. ‘The Danny’ is about being part of the city, not the opposite.”

Maybe the sense of Beach history is stronger but there’s just as much past behind the names up on the Second Concession, also once known as the Don and Danforth Plank Road and Highway 5.

At a 2004 meeting that aimed to help start a community association, much energy was spent discussing names (maybe too much energy considering that would-be organization never flew).

Attendees at that meeting agreed “The Danforth” was problematic because many across Toronto associate it with Greektown. Like the Beaches argument, there are multiple“Danforths”. One man said his dad’s friends long referred to the stretch east of Pape as “The Other Danforth.”

Some attendees seemed shocked to learn that East York – that borough lost in the fog of amalgamation only a few years earlier – never came as far south as Danforth (except for a 300-metre stretch at Shopper’s World).

I mentioned that some (since-departed) nonagenarian neighbours who’d lived nearby since the 1940s said, “Old-timers called the area Upper Midway.” (Midway, was a much larger area, taking in parts of the Beach and Upper Beach, annexed by Toronto in 1909.)

“Midway” was new to all at the meeting – and instantly unpopular with a vocal faction who feared it might conjure images of carnival barkers and games of chance. Another knock against Midway was that it didn’t cover the Glebe, Church of England clergy reserve lands north of Danforth. (Does The Glebe and Midway sound too much like a national newspaper?)

One woman got a laugh, suggesting we call the area Taint because “it ain’t the Beach, it ain’t East York, it ain’t Greektown or Leslieville …”

We’re told that in 2007, when a different group successfully formed the Danforth East Community Association, there wasn’t much debate about names, though plenty of talk about DECA boundaries (which are Main Street to Monarch Park Avenue and the tracks to Mortimer and Lumsden).

One DECA original vaguely recalls rejection of “Danforth Village” (the name of the BIA east of Main), and Woodbine Corridor.

Woodbine Corridor and Danforth Village are both terms used by real estate agents, and are better descriptors than the official E02, E03 and E06 designations used where Beach Metro readers live. We might add that, at least west of old Little York at Main Street, there never really was a true village on Danforth. And Woodbine Corridor sounds like a place to get through as fast as possible without stopping.

Some have complained that residents weren’t consulted before the new signs went up, but Dertilis points out that focus-group sessions were held.

Count me among those not easily sold on “The Danny”, but I’m more than willing to give it a chance. It may sound like taxi-dispatch banter, but it’s been in use – at least since the 1970s. The best objections I can muster are schoolyard taunts. So what if the cool kids would never say “The Danny”.

Maybe we sweat this stuff too much.

Meanwhile, we should take pains to preserve historical accuracy on facts such as East York’s boundaries; future generations are owed that. We should also be open-minded; it still rankles that when I wrote on Beach-versus-Beaches for The Globe and Mail in 2006, an angry reader trolled me for even considering that “Beaches” might be legitimate.

Academics and marketing professionals are undoubtedly right that neighbourhoods can benefit from branding, but while a catchy name might spur people to take a chance on your commercial strip, quality of experience remains key to making them regulars.

There are deep underlying reasons for some of the east Danforth’s shortcomings (fodder for future columns), but there’s reason for optimism: DECA has been going for a decade now and the Danforth Mosaic BIA is nine years old. Vacant storefront percentages are down. Crowds for city planning’s Avenues Study meetings are too big for organizers to handle.

People care, and no matter what you want to call the place, it appears to be (slowly) headed in a better direction. The entire East End gains from that.

What do you think of “The Danny”? Let us know in the comments. This column is part of a recurring series tackling urban issues in the East End. Connect with Stephen Wickens on Twitter @StephenWickens1

This is ridiculous. It had and always will be “The Danforth”. This sounds like a Mary-Margaret McMahon effort. Trying to put her stamp on something and ignoring over 100 years of east end history and heritage!

I agree. It’s as if the Mayor and a business association decided to officially nickname Toronto “The Tony”, make signs, put them up everywhere, start promoting it on letterheads, billboards, and etc., without ever holding a public consultation. It speaks of disregard for the people who live there.

The Danny?!!! I hate the coined name… It’s the Danforth. Danny just feels like some poor john who needs to get laid. No pun intended or offence to anyone named John. I have a feeling this is the sentiment for most of us Danforth people.

I think calling it The Danny makes perfect sense for those types of people who insist on calling MacDonalds, “Micky D’s” or Tim Hortons “Timmy’s”……

“Oh, Danny boy, the pipes the pipes are calling…From glen to glen and down the mountain side”.
This is all I think of when I see Danny signs !!

I’ve never heard anyone say this contrived Danny name in common parlance. Good branding for a neighbourhood is important. And I appreciate the effort made. I just think this was a big miss. This ‘Danny’ name has to go!

Otherwise, the Danforth Mosaic BIA seems to be doing fine work as I can observe from the sidelines.

I think these signs will come down eventually. No one likes The Danny.

It is not an actual debate of residents calling it one thing or the other. It is the BIA changing a name and the rules allow this to manifest itself in maps and signs because there is an assumption that all BIAs are named after their communities – which they are not. No real sizeable group has ever called it The Danny and no real sizeable group ever called is the Mosaic which is what these signs covered. A BIA branding effort is fine but that does not mean an area suddenly has a new nickname.

You’re mistaken. Our sense of community is very strong and the majority do not like “The Danny.” On the Danforth-Woodbine Facebook page there was an informal poll done and the vast majority had an intense dislike for the name. My family has lived near the Danforth for generations and I’d never even heard the term until very recently. It sounds like a place that frat boys would hang out. Please stop trying to force this on us.

Generations of my family have lived for 80 plus years just north of ‘The Danforth’ near Main and I still live in the area. Actually, as kids we used to hear neighbours refer to the street as the “Danferth” and it was the cab drivers that used ‘the Danny’ term. The street is Danforth Ave and it is the local residents that have always referred to the street as ‘The Danforth’. There is historical significance to the proper Danforth naming. What becomes of Danforth Rd now?

I was born and bred on the Danforth in the early 30’s. (Danforth & Greenwood) Only left to get married in ’56. – The Danny. So ridiculous. “The Danforth” is a good strong well-known name and does not need any help what-so-ever. Please get your heads on straight and just call it what it is. The Danforth.

I agree that ‘The Danny” is sorta cheesy, but ‘The Danforth” isn’t specific enough, as people in the column point out. When I say I live near the Danforth, people assume I’m talking about Riverdale or Greektown. All in all, I don’t get the anger so many people seem to have. I think the area really is improving, thanks to efforts at DECA and the BIA. You can’t make everyone happy, but it’s nice to see that people are trying because, for decades, the Danforth east of Pape was a study in neglect and decline. This was a really interesting, fair and entertaining column.

I really dislike this new name for east Danforth. It’s not only cheesy, but silly. Why not East Danforth or Danforth East? Why is a special name even necessary? I was pleased to see the article as I wondered why these signs had suddenly appeared. It sounds like only a few people made the decision to use this name.

Live on The Danforth for all of my 48 years. We called it The Danforth…always…and always will.

Its not the name change, its that the name you came up with literally couldn’t be any worse AND someone’s been obnoxious about it by plastering it everywhere. This neighbourhood is understated and cool. No need to mess with that.

Will Gerrard and Victoria Park become Gerry & Vicky? It all seems a tad infantile.

It sounds dorky. Don’t worry about calling it the Danforth, or even Danforth East. But the Danny is ridiculous. And as what’s been happening lately, I don’t know one neighbour or business owner who was consulted. You have one or two politicians who pad numbers, exaggerate to fit their own agenda.