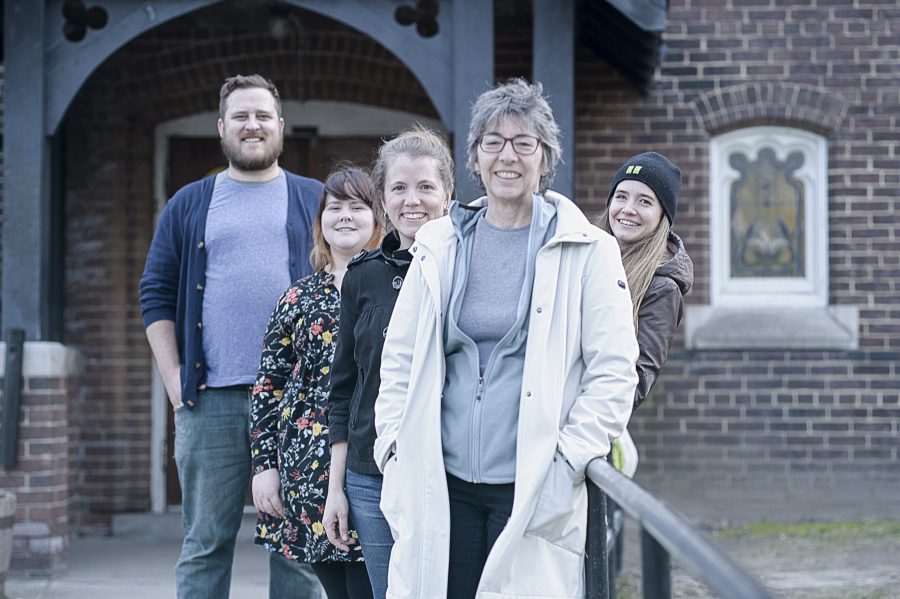 When Matt Adams, associate priest at St. Aidan’s in the Beach, first began Creative Space, a monthly open house that invites artists to use the church sanctuary as a studio, he thought it would be a relatively low-key way to give back to the community.

“We wanted a way to connect with artists,” said Adams, of the program that began last fall. “And I kept hearing that there are a lot of artists, but there’s not a lot of space.”

But after several Saturday sessions and a conversation with participant and artist Diana Bahr, Adams realized that while the once a month drop-ins worked as workshops, they weren’t going far enough to address the underlying issue of a lack of studio space for artists across the city.

The two began brainstorming and, without wasting any time, drew up plans for a pilot project – a six-month artist residency for emerging artists, now underway.

Called Creative Space Residency, the project works to revitalize the artistic heritage of the church – prominent Canadian visual artist Doris McCarthy was a member – and offer affordable and accessible studio space to artists at the beginning of their careers. The inaugural class includes Bahr, and three of her former classmates, recent graduates of OCAD.

The four work out of the newly-christened Alan Dodds Studio, which for years was the residence of the late Alan Dodds, the church’s longtime caretaker and a fixture of the church community.

“He was very much a part of the church,” said Adams.

Dodds will be honoured by the church later this month on May 13, the same day the artists open their bright, airy, top floor Silver Birch studio for the Akin Collective’s East End Gallery Crawl.

Akin operates several affordable studio spaces throughout the city, and the team at St. Aidan’s looked to Akin as a model when drafting out a plan for the residency.

“Akin has grown by securing 12 commercial spaces in four buildings across the city,” explained Akin Collective’s Oliver Pauk, of how the group is trying to meet the demand for suitable studio workspace. “It’s great to hear of other organizations pursuing the same goal by making use of, in some cases, under-utilized buildings.”

Adams said the ultimate goal would be to see St. Aidan’s art residency model copied by churches across the city.

Pauk said there have been some instances already of artists setting them up in churches, giving the example of Animation Portfolio Workshop who rent space at St. Matthew’s United Church on St. Clair Avenue West.

“We’d love to help out with a project like this,” he said. “It’s an idea that has great potential and is an innovative solution to a problem that our community is experiencing.”

Bahr said she loves the double entendre of Creative Space – a space to be creative, but also a creative use of space.

“It’s such a beautiful space to work, it’s inspirational, regardless of denomination, it’s just this nice space to be in,” she said.

She, and her colleagues Elizabeth M Lopez, Lili Vahamaki and Jade Gregory, said their art practice would likely be stalled if it weren’t for the new residency.

“It’s not just about space, it’s about the community of artists,” said Lopez.

“We can hold each other accountable to a degree,” adds Bahr.

As part of their residency, the four Creative Space artists will be leading workshops for the community throughout the summer, and host a gallery show in the fall. For now, see what they are up to on May 13 on Akin’s East End Studio Tour, which also visits Studio 888, Cobalt Gallery, Yellow House Gallery and Great Escape Book Store. More information at http://www.akincollective.com/calendar/2017/5/13/akin-east-end-gallery-crawl.

It’s nice that St. Aidan’s can make space available for local artists. It’s unfortunate that they were not willing to accommodate the request that some space be allocated in the forthcoming condo for seniors housing.

Which, ultimately, is more important to the community?