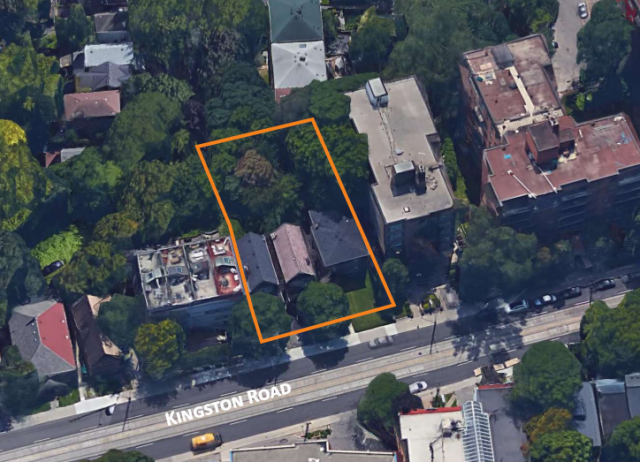 The proposed condo fronts onto Kingston Road and backs onto Wheeler Avenue. PHOTO: City of Toronto

Another new condo could be coming to Kingston Road.

This one is a nine-storey development for 507-511 Kingston Road, proposed by Vista Nova Development Ltd., and located on the south side of Kingston Road backing onto Wheeler Avenue. The proposal is for 57 one, two- and three-bedroom residential units and 72 underground parking spaces with a vehicular elevator. Two four-storey townhouse units would face south onto Wheeler Avenue.

The proposed building’s height would be 30.5 metres from Kingston Road and a 14-metre high structure, stepped to 40 metres as viewed from Wheeler Avenue.

A March 9 staff report on the proposal notes significant concerns with the “height, transition to the south, and frontage” and notes that “the proposed building height plus the grade difference is not acceptable.”

“The proposed development must have an appropriate transition to the neighbourhoods in the rear,” reads the report.

While staff write that they could not support the application as proposed, they note they have communicated their concerns to the developer over the past several months and the applicant has “indicated a willingness to work with staff to achieve a more appropriate development.”

They recommend that the application continue to be processed “notwithstanding that the original proposal would merit refusal, as it is possible that review and revision will result in a supportable proposal.”

To that end, the city will be holding a community consultation May 4 from 7 p.m. to 9 p.m. at the Beach United Church at 140 Wineva Avenue to discuss the planning application.

The development would require the demolition of the buildings currently in place which include two existing detached dwellings and a two-storey apartment building.

The staff report notes the proposal will be considered in context of other buildings in the area, including recently approved developments that are six, seven, and eight storeys tall. Zoning permissions on the site are split, with greater density and height allowed along Kingston Road and much lower density allowed fronting Wheeler Avenue.

I was taking an Uber home from downtown the other evening and I remarked how cosmopolitan and upscale Kingston Road is becoming with the addition of these condos. It is adding a vibrancy and life to a strip that was quite seedy. I also read recently in “Frontier City: Toronto on the Verge of Greatness” on how some counsellors are in the vanguard of affordable housing for the city and that they often run into a wall of “NIMBYism” from local residents whenever such development is proposed. We in the Danforth Village community have gone through this process as well but I believe that the vast majority of us now have come to embrace the process. Remember that with all the problems with affordable housing in the city, that these condos provide a first step on the real estate ladder and possibility of living in one of the beautiful homes we now inhabit and quite frankly could probably not afford ourselves at this point.

I hear very few people say “No development whatsoever.” Most people labelled NIMBYs are simply objecting to development that disregards neighbouring buildings or the look of a community. There is no reason why development can’t respect its surroundings. Look at the brand-new building on the southeast corner of Broadview and Gerrard. Fits right in!

It’s not an issue of NIMBYism. The proposed height is 4 times the height allowed under the Zoning By-Laws on Wheeler Ave. It’s clear that the developer only has profit in mind when proposing a development with a height 4 times the Zoning By-Laws. The developer owns the property and is entitled to build on the property in accordance with the Zoning By-Laws and the Neighbourhood designation of the area, which would allow for a 4 storey building. The size of the building is not appropriate and does not take into context the neighbourhood and safety concerns of the local residents. Development is important but unfettered development that only focuses on the developer maximizing profits and not the safety and context of the neighbourhood should not be allowed.

I think that the problem is that there are Zoning By-Laws, often referenced by those opposed and the more current Municipal Act which uses as a calculation for height of the building a formula for “brick to brick” on avenues and roads in the city. This is used in major arteries like Danforth Avenue, Kingston Road and Queen Street when considering the height of buildings. The developer is also required to step back the building to the existing neighbourhood abutting the property in efforts to make the new development less obtrusive. They are also required to consider traffic patterns, parking and yes, sunlight studies, and even the flight path of birds, and which from the presentations that I have attended, they do. They are not the boogey man in this scenario and in the light of the problems with affordable housing in the city, they may actually assuming the role of hero!!!

How much is the developer paying you for this kind of pitch? The proposed 9-storey building is taller than any of other neighbourhood comparables provided. The proposed development doesn’t fit into the context of the neighbourhood and the city planning department’s staff report clearly states that the original proposal would merit refusal because of the height, transition and front yard setback. The meeting I attended clearly highlighted how the developers had not conducted traffic studies on how the increased traffic would effect the intersection of Lee and Kingston. The development is on both Kingston and Wheeler and both zoning-by laws need to be considered when determining whether a proposal is appropriate for the site. The developer is only focused on increasing profits and not on following zoning guidelines which were designed to foster controlled growth in Toronto.

The development is on Kingston Rd. not Wheeler! NIMBY!

The proposed development appears to have addresses on both Kingston Rd and Wheeler. Is it really unreasonable for the residents of Wheeler to voice concern about a developer who proposes something that exceeds the height by 4 times what local by-laws call for?

I live in the area and to put it politely that strip is a shit-hole and almost anything they do from Warden to Birchmount will be an improvement.

Hear we go again, more development on Kingston road. Yes, it is good to rejuvenate the area to a degree and within guidelines and bylaws, but it is a old government of the city of Toronto that is the biggest problem and I think now it seems to be the greed of the city of Toronto and the developers. The building at Main Street and Southwood which is under construction it started off to be approved for six stories and then afterthey went back for approval for seven-stories and a mechanical penthouse.And now another developer wants to get 9 stories and apparently 4 stories is the bylaw height in the area. And if they do get approval then they will probably go back for 10 stories and the Sega well continue until we hit 30 floors or more which will eventually happen if our city of Toronto and counselors don’t put their foot now. And yes maybe there should be a number subsidized housing units within each of these condominiums that are being built as mandatory and this may help with the housing situation and if they are mixed within the community then no one would know any other wiser if they are on subsidy or not. And there is a lot of talk about closing schools by the members so why not convert them into subsidized housing “Metro housing” and PNP (Private Network Providers) is the way to go as far as I’m concerned because there would be a superintendent on-site 24 hours unlike “Metro Housing” but the city of Toronto need to start making decent decisions are out there is…

At least the city will be holding a community consultation… In Mississauga they put up M city Condos (www.mcondos.ca) and they never even asked the public for their opinion. Traffic is getting so bad in the area.