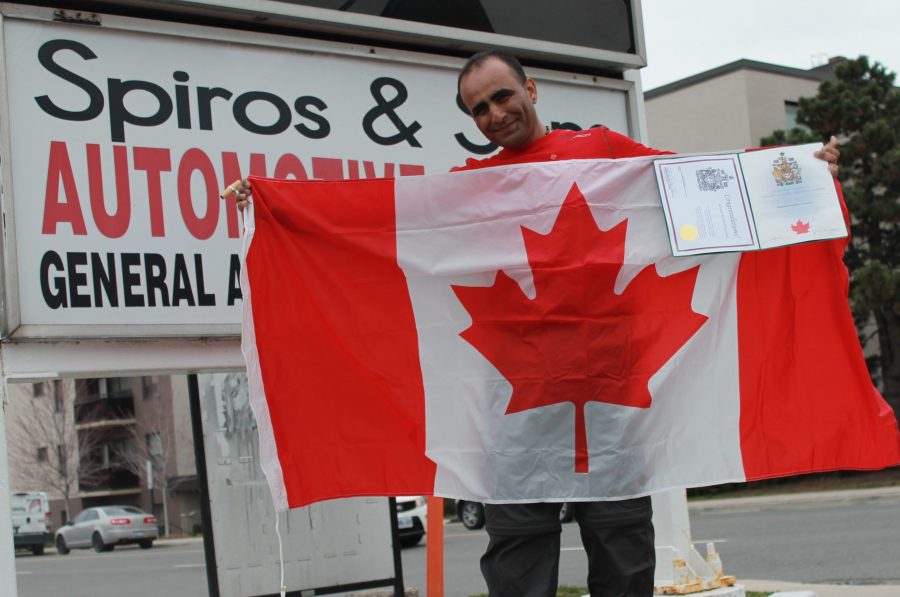 Grinning from ear to ear in front of his workplace, the Top Valu gas station on Kingston Road, Tanzanian-born Shehzada Mazherali Kassamali might be a familiar face for many drivers in the neighbourhood.

But on a recent day in April, he’s smiling for a special reason. Holding his Canadian citizenship certificate in his hands, he beams. It may be but a simple piece of paper, but what it represents is much more than that.

“I was already accepted from the beginning,” he said, of his initial years in Canada. “So I didn’t feel like a foreigner when I was in the country. I didn’t feel that at all … Everybody was nice to me. The community is amazing. [It’s a] beautiful community, diverse.”

Even so, receiving his citizenship at a ceremony earlier this year gives Kassamali a renewed sense of purpose about his life here. Especially because the requirements to obtain it take some time and patience.

According to the Government of Canada, to become a Canadian citizen applicants must be permanent residents who have been physically present in the country for at least 1,460 days during a six-year period, in addition to being present for 183 days within the four years prior.

Applicants must also demonstrate a suitable understanding of English and/or French, and prove their knowledge of our history, values, institutions and symbols, among a host of other requirements.

“I felt accomplished,” he said. “I felt like I had accomplished something in my life to become a citizen of Canada.”

Becoming a Canadian has been a goal of his since visiting Toronto to attend a cousin’s wedding 10 years ago. Shortly after arriving, he realized he did not want to leave so he stayed to travel the country.

Back then, Kassamali had a job at a paper factory in Tanzania after completing an advanced degree in physics, chemistry and mathematics. But despite having a life back in East Africa, Kassamali said it was Canada that truly felt like home because “when I came to Canada I knew I could feel a sense of human values, Canadian values – talking to people, everybody says thank you, everybody says you’re welcome, you know. Everybody holds the door for you. You see the values of Canada and you fall in love. You just can’t not fall in love wherever you come from.”

And it wasn’t long before Kassamali fell in love with a Canadian girl, who in 2010 became his Canadian wife.

Since moving to Toronto, Kassamali has been working as a manager at Top Valu, where he says he is “very happy” – a statement that becomes obvious as his boss jokingly chimes in, both of them laughing heartily, “We don’t want him here but he stays here! We can’t get rid of him!”

But now that he’s a citizen, he said he is “looking forward to many different things” – specifically, the possibility of becoming a teacher.

“I kept saying, How can I give back to the community? So hopefully I get more into my bachelor of education. I’m hoping in the future that I become a teacher,” he said.

As a member of the Ismaili community, Kassamali said he feels strongly about giving back and making a difference in the lives of others.

Being Canadian, he feels, will also help him achieve this goal.

“My spiritual father is the Aga Khan and as he put it in his words when he was here, Canada is a leader in the community of the nations in the sense that Canada is successful because of its values,” he said. “Because Canada is peaceful, it’s democratic, it shows a pluralist society which has helped a lot of countries in crisis become countries of opportunity and that is very touching for me.”

It’s a sentiment that seems to be echoed by a number of Canadians in the Beach area.

Grabbing a bag from behind him, Kassamali began to pull items given to him by members of the community.

Among them, a Canadian flag gifted to him by a local war veteran, a container of real Canadian maple syrup, and a book about the top 100 unusual places to visit in Canada.

His eyes twinkled, smile growing as he reached to remove each item from the bag, holding the gifts from his local friends.

“I received also a letter from the MP and when we got our citizenship we received this booklet too with all sorts of passes for the parks,” he said. “I’m looking so forward to the 150th celebration so… very glad.”

“It means a lot [to be Canadian]. I feel like I totally belong here, where I can make a difference.”

Thank You
MY HEART BEATS
CANADA
To Beach Metro Team