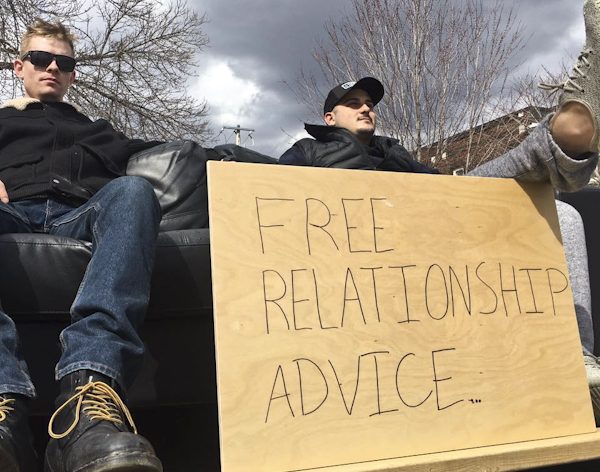 Dylan Cann, right, and friends provide free relationship advice from their couch on the back of a pickup truck. PHOTO: Facebook

What began as a way for a group of friends to enjoy some fresh air has now turned into a popular Beach attraction.

Life-long Beacher Dylan Cann, 25, and his friends live in basements in the Queen Street East and Wineva Avenue area, but they were determined not to let that stop them from having fun above ground. In fact, it’s their basement dwelling that sparked their now neighbourhood-famous idea: “Free Relationship Advice”, live from the back of a pickup truck.

“We don’t have outdoor space,” said Cann. “So we used to just throw a couch on the back of the truck, bring it down there and just enjoy the view.”

But the recent discovery of a stray piece of plywood in the truck gave them pause for thought.

“My buddy Ben and I were down there the other day and we had this piece of plywood in the back of the truck that we were going to make a chalkboard out of,” he said. “We just decided we would write ‘Free Relationship Advice’ on it.”

They didn’t think their sign would gain much response, but on that first sunny day in February, Cann said between 40 to 50 people stopped at their impromptu therapist’s couch.

“We just wanted people to laugh and [to] hand out free advice,” he said. “And you know what? You’d be surprised the number of people that actually stopped and asked for advice.”

So many that he said they could hardly keep up with the demand.

“We barely talked to each other during that whole time because we were just talking to people,” Cann said. “So many different types of people. Kids as young as 12 and then people all the way up to their 70’s.”

And, Cann added, most people were not holding back.

“I was quite surprised by some of the stuff people were telling us,” he laughed. “[There were] a lot of inappropriate [stories] actually.”

Since their initial session, a photograph of the crew took off online. Meaning Beachers who did not see them in person the first time may still have a chance to solicit some free advice this weekend.  The group wants to participate in the Toronto Beaches Lions Easter Parade Sunday, April 16, and have created a GoFundMe page to raise money to cover the cost of the parade entry fee, as well as the cost to build a deck off of the back of the truck and create a proper sign.

Cann said they aim to raise between $400-500 and are currently about halfway there. He also noted that they will “just have it open until the parade. We’re not gonna try to make money off this. And if we ended up raising money we’d probably just look at donating it to something local in the Beach.”

Although the GoFundMe page will be taken down after the parade, Cann said the advice has been such a hit that they’d like to continue it through the summer months.

“We plan on keeping it going all summer,” he said. “You know what, it just puts a smile on everyone’s face that walks by. At the end of the day, all we’re out to do is just make people laugh and smile.”