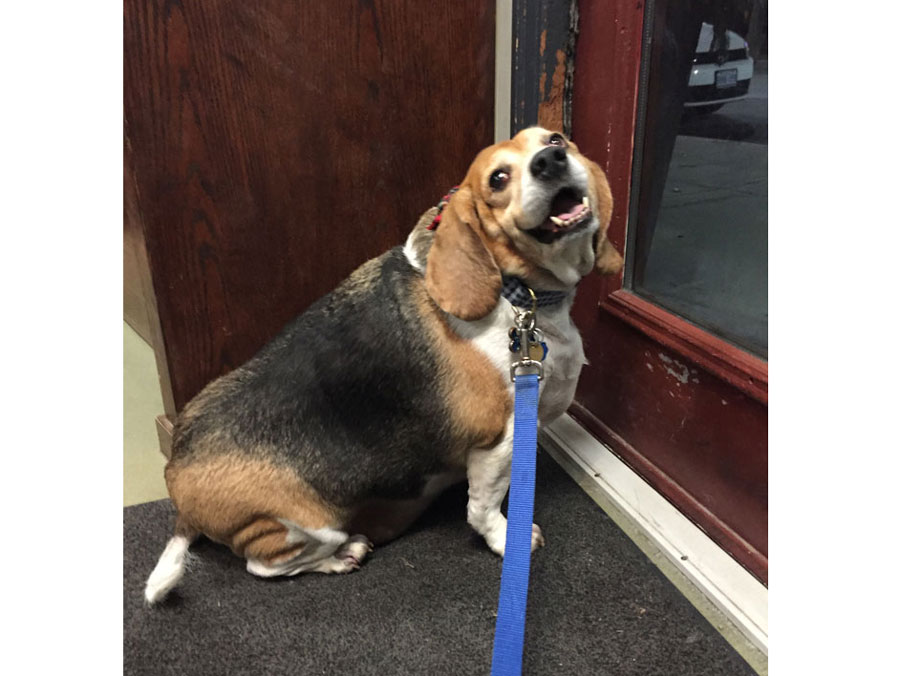 In my 2016 pet recap earlier this year, I officially declared my commitment to a beagle-positive outlook for 2017. I also mentioned Archer, the bashful Italian Greyhound with Happy Tails Rescue. At the time, he was still looking for a home. Now, I’ve got some positive news! He’s been adopted and has a new pesky little Italian Greyhound brother named Enzo who has made it his mission to release Archer’s inner bad boy for a lifetime of brotherly mischief! Watch for the canine version of “The Italian Job” coming soon to a theatre near you.

Getting back to my resolution of positivity, I’m delighted to report things are going well. I’ve even got a tour guide to keep me on that perky path to happy town. His name is OB and he’s our first rescued beagle of the year.

OB is the happiest of happy-go-lucky beagles – this despite the fact that if it weren’t for bad luck he’d have no luck at all. Weighing in at a knee-buckling 70lbs, he is the most obese beagle we’ve rescued to date. And that’s just one example of his woes.

He’s got a grocery list of medical conditions left untreated by his previous owner, starting with a full-blown bout of cherry eye in both eyes. A painful case of cauliflower ear has impacted both ears, more likely due to severe infection than consequences from a wrestling career. We’ve yet to conclude whether OB will require ear surgery. In the meantime, we’re trying a topical treatment like the one we are using for a possible allergy-related inflammation of all four paws and one otherwise gleeful tail.

There were easier fixes than the ones above, but that’s not to say they weren’t uncomfortable for poor OB.

His nails were so overgrown they had curled under with some actually embedded in the pads of his feet. He was also sporting a skin tag that had grown so long he was tripping over it, but that was easily removed under local anesthetic.

He may have good reason to feel gloom, despair and agony, but nine-year-old OB refuses to let any of it weigh him down – he is gravity-defying and in far more ways than one. The first indication of his incredible lightness of being was entirely literal when he effortlessly hopped up on the best, most cushiony chair in the house the night before heading to his foster home. I suppose “people furniture” is much more appealing than a lowly dog bed on the floor, especially after a long and torturous week at the vets. Although, true to character, OB didn’t seem to mind his hospital stay. The girls at the front desk served as a pleasant distraction from all the medical procedures. By the time he was ready to leave, our little ladies man had his own personal entourage.

Perhaps his unabashed love for comfy furniture and doting humans, including ones armed with stethoscopes, are proof that OB was at least the recipient of past affections. Better than nothing, if we’re going to think like a beagle. Mind you, a beagle would have you think there’s nothing wrong with eating junk food until you burst like the greedy kid touring the Willy Wonka factory. But over indulgence can turn you into something much worse than a giant blueberry.

He may not have burst, but OB’s weight has put him at high risk of health complications. The extra pressure on his joints can lead to arthritis which can lead to torn ligaments of the knee which can lead to costly surgery. In fact, Algernon, my Mr. November, is undergoing that procedure this month.

Obesity can also contribute to high blood pressure and heart disease which results in greater risk under anesthetic. This is why corrective surgery for OB’s cherry eye must wait until he’s significantly lighter. There are other concerns, but above all, there is quite simply the concern for quality of life. Happy, healthy dogs have an enviable way of living life to the fullest in every moment even if that means sniffing the same blade of grass for what seems an eternity to the person at the other end of the leash.

It will take at least three months to lighten OB’s load. Having ruled out a thyroid issue, we can safely assume the weight is entirely due to overfeeding and that he was fed low-quality food (although I’m sure he’d disagree with us). Judging from his disdain for every canine diet offered him, OB’s brand of choice until now must have been “people food”. Hard-wired for hot dogs, the transition won’t be easy but it’s not impossible. Remember, OB is a positive guy. We just need to re-direct that positivity towards a wholesome prescription kibble! OK, maybe I’m more positive than he is in this category.

It’s been about a month now and we’re seeing progress. He’s gone from a Size 8 harness to the loosest notch on a standard beagle Size 7! He’s also gradually matching that peppy personality to his step and the great outdoors is coaxing him to finally venture beyond his initially brief duck waddles to the back deck and embrace the glorious expanse of yard below. This has led him to the unexpected but magnificent discovery of mud! He’s taken to tossing toys up in the air too, but only when mud is not available.

After a day of mud-slinging, mandatory paw cleaning, indoor toy tossing and grimacing through another blah dinner meant for dogs only, he’s one pooped pooch. That’s when he’s ready for his last activity of the day – sawing logs smack dab in front of the TV. It’s especially endearing when his foster mommy is straining her ears to enjoy that movie she’s been looking forward to all week. I can sympathize as I’ve got my share of high volume snorers but the truth is we both know the sound is music to our ears.

They say bumblebees shouldn’t be able to fly and yet, somehow, they can. Just as it is for gravity-defying beagles like OB for whom the sky above isn’t even the limit. For OB, the possibilities are endless!

OB is a nine-year-old beagle bursting with optimism at Big On Beagles Rescue, www.bigonbeagles.ca. Follow his journey to good health and just maybe, his ultimate destination will be YOUR best seat in the house. In the meantime, our sincere thanks to Catherine & Bill of Sheba’s Haven Rescue for their role as foster parents to our OB.