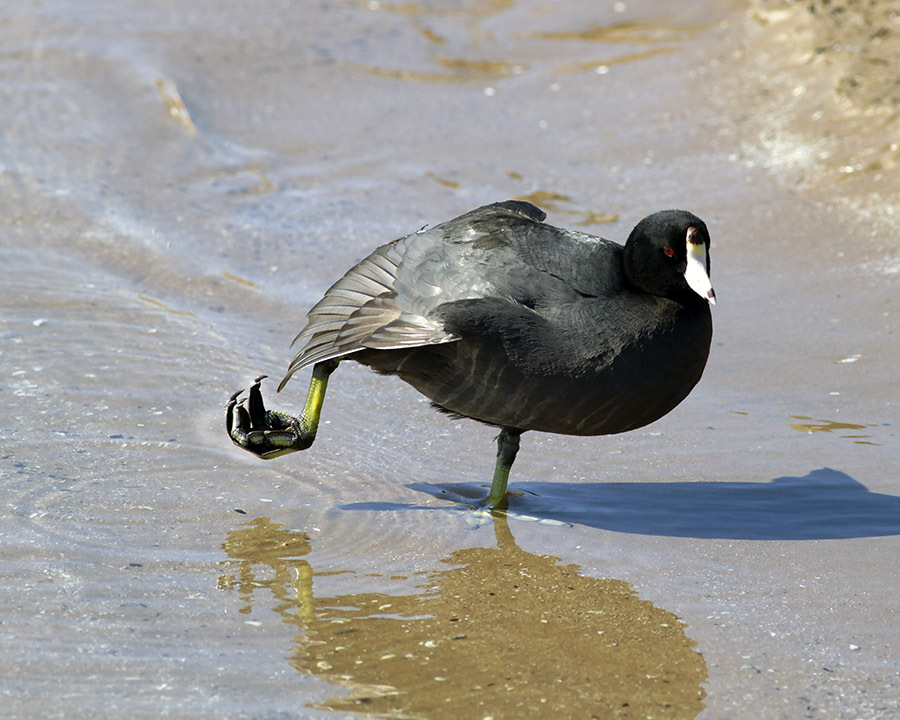 An American coot rests in the water. PHOTOS: Ann Brokelman

Here’s a short tale about a neat bird with a rather unfortunate name. I tried to figure out which coot came first: the bird or the slang for a crotchety old man. Dictionary.com tells me that the Dutch may have used the word Koet about 800 years ago when referring to the bird, and I don’t see any dating references for the slang, so I’m going to assume the name for the bird came first. Do any linguistically-minded Beach Metro readers care to weigh in?

The other day I was at Tommy Thompson Park by Unwin Road when I saw the flash of a bright white beak. Not too many birds have this feature, so my first – and correct – assumption was that it belonged to a coot. I grabbed my camera, zoomed in, and was thrilled to see that there were two of them. I perked up my ears and listened: I love their various sounds of grunting, croaking, and squawking noises or a short single-noted krrp or prik. I watched as they dipped beneath the water, barely leaving a ripple, and chased each other both above and below the surface. They may be a little funny looking, but they are amazing to watch.

So what is an American coot, aka mud hen, then? They are part of the rail family along with the Virginia rail, sora and common gallinule.

Their feathers are dark charcoal and gray, they have a bright white beak, strikingly red eyes and a red diamond on their forehead. On top of this, each of their toes has a large yellow-green flap that acts like a flipper. Coots are about the size of a chicken and eat algae, water lilies, and duck weed while propelling themselves through the water. As you watch them you’ll often see one dive deep to the bottom and resurface with greens dangling from its mouth.

While the coots were a pleasant surprise sighting, that day I was at the park looking for a very special guest: a Lark Sparrow who is wintering here. I received a call from my friend Adair about this uncommon visitor.

Adair was concerned as the sparrow’s normal winter habitat is California, Florida, and even further south.  While it is a rare bird to find this time of year, lark sparrows have been seen in Greater Toronto Area over the years. A gorgeous bird with lovely markings and facial patterns, the Lark Sparrow – unlike some of our local sparrows – walks on the ground rather than hops. When I saw him he was walking underneath some branches to keep warm.  The mild weather should help keep him healthy, and hopefully he’ll hunker down or move a little south before our next cold snap.

Thank you, Adair for making the call. Seeing him was quite a treat!