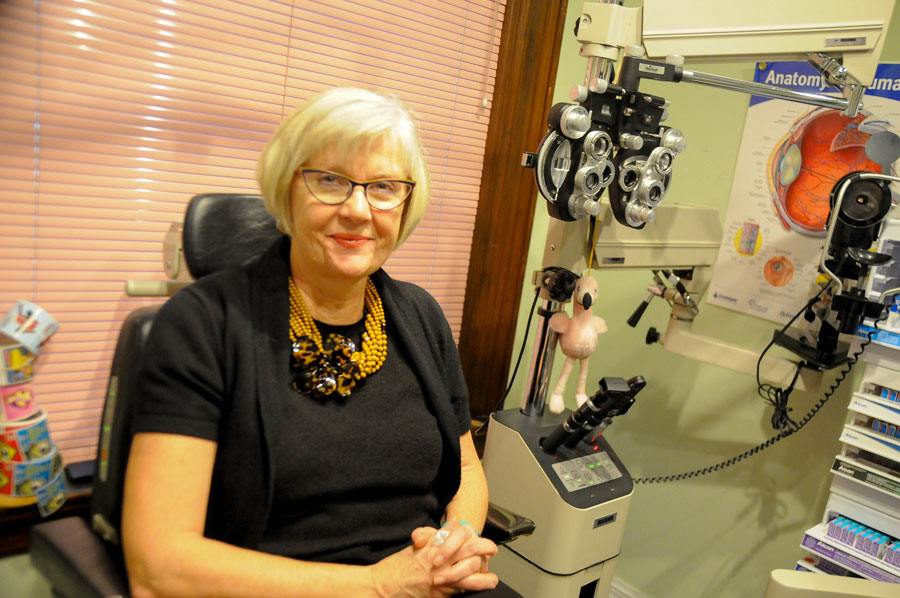 This is part one of two issues of Eye on Business coverage, featuring businesses local to the Beach and surrounding neighbourhoods. Look for our next edition in the February 7 issue of Beach Metro News.

This year, Karin Rummel Optometry — you know the office, it’s the charming house with the front porch and well-tended front lawn on Queen East near Herbert — is celebrating 35 years in the Beach with several generous initiatives, like donating glasses to charity, a toy drive, and regular draws for children.

Rummel’s community spirit stems from her lifelong commitment to the neighbourhood. Having grown up in the Beach, she began her optometry practice in 1982 — she used to live above the office — and has fostered its growth since.

“We have grown to have five doctors with a variety of special interests — one completed a residency in pediatrics and binocular vision (although all of us really enjoy examining children!), others have interests in specialty contact lenses,” she said, noting more doctors mean more flexibility for patients in appointment times.

Her practice has “taken care of Beachers for decades, from providing regular eye exams, to fitting contacts, providing eyeglasses, binocular vision testing and treatment, disease diagnosis and management. We have continually invested in new technology as it became available.”

Rummel and her colleagues see a banner year ahead, although the celebratory events began in late 2016 with a charity toy drive for Community Centre 55. Throughout the year, they will be donating one pair of glasses for every paid purchased at the shop through Optometry Giving Sight. There will be regular draws for children who get their eyes checked and expect to see Family Day popcorn and other fun stuff on their lawn in the months ahead. https://www.drrummell.com/

Over the Moon Bake Shop

So, after spending 20 years in the communications industry Shilling decided to pursue her love of all things dough by signing up for night school at George Brown to learn the foundations of commercial baking.

Taking a leap of faith, Shilling soon after opened Tastes Like More Bakery in the Bathurst and Wilson area but after a few years and some unforeseen circumstances, she was forced to close the shop. Feeling frustrated and bit forlorn, Shilling took a two year hiatus from baking. But a competition near the end of 2014 proved to give her the confidence she needed to get back in the game.

The Food Network announced Canada’s Donut Showdown in November 2014 and lo and behold, Shilling and her gourmet donut were crowned the winners.

“Winning a donut showdown was such an amazing experience that I decided that donuts would be the focus of my next venture,” said Shilling. “Donuts are the foundation of Over the Moon Bake Shop.”

The bakery, which shares a space with The Stone Pizza at the corner of Scarborough and Kingston Road, operates from 8:30 a.m. until 2:00 p.m. Tuesday to Sunday and if you happen to walk past in the early morning, you’ll be lucky enough to catch a delightful whiff of Shilling’s freshly baked donuts, cinnamon, and drool-worthy icing.

Shilling hasn’t left much to the imagination when it comes to her donuts, offering every type customer’s could desire. Filled varieties include caramel apple pie, chocolate or caramel dipped and old fashion cake styles. She also bakes a variety of scones, cinnamon buns which include flavours such as gingerbread and dulce de leche along with the historically favourite traditional flavour, and cookies.

Over The Moon Bake Shop is located at 281 Scarborough Road in the Upper Beach and its website is http://www.overthemoonbakeshop.com/

Celebrating milestones comes naturally to Shelly Purdy. And so it should. It is her business after all.

The Beach resident and Canadian jewellery designer has been helping couples celebrate their most important moments for years now. From creating handmade diamond engagement rings to wedding and anniversary bands, she’s done it all.

This year, she’s marking her own milestone — Purdy is celebrating 25 years in the business.

Purdy put down roots in the heart of Toronto’s fashion district when she first began to pursue her dreams of becoming a jewellery designer, opening a boutique shop that focused on offering locally made, ethically sourced jewellery to her clients.

And although the location of her shop may have changed, her dedication to delivering a unique and high quality product has not.

“Creating rings that people wear their entire lives to celebrate their most precious relationship is the best part of what I do,” said Purdy, adding that “I’m making 25-year anniversary bands for couples whose wedding and engagement rings I designed when I first started my business. In an industry like this, establishing trust and maintaining it over 25 years is pretty special. I’m lucky to have such loyal clients.”

Purdy prides herself on creating work that is uniquely Canadian and credits the tree-lined streets and winding lakeside boardwalk of the Beach for serving as inspiration for her “Seasons” Collection — a collection that was created in collaboration with exclusive Canadian diamond brand, Maple Leaf Diamonds.

On top of being renowned for her jewellery design and winning awards such as the De Beers Diamonds Today award, Purdy has also made a name for herself as a prominent supporter of Canadian diamonds and young entrepreneurs. She recently participated as a featured designer in Rio Tinto’s ‘Diamonds with a Story’ campaign, which highlights Canada’s Diavik Diamond Mine, and acts as a member of George Brown College’s advisory committee for the jewellery arts program.

To view Purdy’s work, visit her studio online at www.shellypurdy.com.

M&J’s Eastside Deli in Birchcliff — still somewhat under the radar despite recently celebrating its one year anniversary and as home to some of the best sandwiches in the city — has a loyal and passionate clientele.

Case in point: the letter recently delivered to the Beach Metro News office, praising the husband and wife owned operation’s quality and noting it “is so much better than the usual chain store fast food … it is so nice to see a new independent business open up in the area where there are so many empty shops.”

It’s easy to understand where that passion comes from. Longtime Birchcliff residents James Biding and Michelle Albero — she’s lived in the ‘hood for over 15 years, he since the two were married six years ago — are serious chefs, and the care they put into their craft is admirable.

“We make everything from scratch,” said Biding of the lunch-spot’s menu. And he means everything — they even make their own pickles.

“We have spent endless hours researching and perfecting our recipes. We developed a menu that, we feel, showcases our talent. Some menu items that seem familiar, such as pastrami and BBQ pork, can be seen in a new light when they are sampled in our restaurant,” he said. “Most people are only familiar with Montreal Smoked Meat and pulled pork. However, our versions are neither. We want to show that there are other versions of the same dish which are considered classic and have stood the test of time.”

Their passion for food started at home as children, and blossomed with Albero taking pastry and baking classes and Biding training in a number of well-received restaurants.

“But what changed my outlook on food forever was a trip to New York City in 2009. I went on a food sampling spree, absorbing as much food culture as I could in a few days,” he said. “The respect for tradition and method was refreshing to see. There I learned that, above all else, tradition is key, all methods should be mastered and all ingredients must be respected, no matter how modest they may be.”

Biding says the couple loves the Birchcliff neighbourhood and are proud to operate a restaurant that will hopefully bring people to the neighbourhood to experience its vibrancy.

M&J’s Eastside deli is open Monday to Friday from 8 a.m. to 5 p.m. and is located at 1433 Kingston Road (by the Warden traffic lights). Its website is mandjseastsidedeli.com.

A local start-up specializing in dynamic dog toys is about to see its star rise with an appearance on CBC’s Dragons’ Den this week.

Scott Luscombe and Marina Vander Heyden, the Beach-based creators of Dawg Grillz, were plucked from businesses Canada-wide to pitch to the Dragons after an open-call audition last February. They filmed in May, with Dawg Grillz first out of about 15 other nervous pitchers to face the Dragons. Luscombe said they were asking for help “to build up our brand, promote it to a larger audience and get it in retail stores across Canada and the United States.”

Dawg Grillz are brightly-coloured chew toys that make it look like dogs have teeth. The company also sells other dog products like collars.

Neither Luscombe nor Vander Heyden had been filmed for television before and the experience was quite the production, he said.

“We were both incredibly nervous as we walked up the metal staircase with lights and cameras to get ready to make our way across the famous walkway and down staircase to meet The Dragons,” he said. “The set was much larger and more elaborate and intimidating than we had expected, and we both found it amazing that CBC could set up such a large production on an upper floor of the building.”

Their nerves settled during the 25 minutes spent in front of the Dragons. And while Luscombe said they can’t give any specifics about the episode or what the Dragons thought, “It was an incredibly fun experience that will be very entertaining to viewers to say the least.”

Meanwhile, the Simple Craft Company has graduated from its weekend marketplace concept and is now open Thursday through Sunday.

Stocked with fresh baked goods, kimchi and other unique specialty foods and products, the Upper Beach storefront fills a niche in the Main and Gerrard area.

The Simple Craft Company is at 152 Main Street. More information can be found at www.thesimplecraft.com.