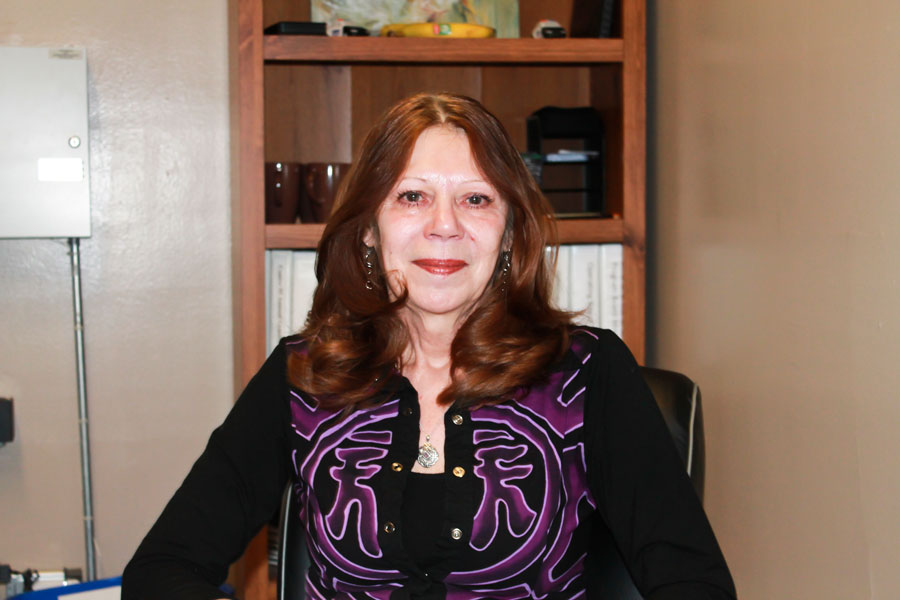 Nancy Culver sits at her desk on her last day at Centre 55. PHOTO: Lara O'Keefe

The sound of fingers tapping on a keyboard echoed through Community Centre 55’s front hall as a cheery voice rang out, greeting visitors as they entered the building.

Sitting quietly at her desk, Nancy Culver turned and smiled warmly as she motioned for me to take a seat in front of her. Her office, located just around the corner from the front door, was tidy that day but certainly not empty – an observation that shouldn’t strike anyone as being odd except that, on that particular day she was supposed to be preparing to leave.

After 26 years at Centre 55, Culver enjoyed her last day as Volunteer and Special Events Administrator on January 12. Yet, on her final day she was still hard at work, trying to ensure every last detail was taken care of before she left.

“I’ve done critical paths of everything I’ve done for the past two years or so, so there should be a painless transition, hopefully,” she said, smiling.

She said while a replacement had not yet been hired, she didn’t want the new person to be out of the loop when they started.

This elevated level of care is just one of the traits that has made Culver such a beloved fixture of the team at Centre 55, and in the Beach community as a whole.

Her years of service mean she has been uniquely positioned to watch the community hub grow while staying true to its mandate.

“When I started here there was only one computer,” she said. “I didn’t know what a fax machine was, I had no idea how to use one.”

While technology and the number of people served has changed, the heart at the core of Centre 55 has not changed all that much.

That adds up to a lot of people who have been touched by her work – people who will likely miss her as much as she will miss them. Not to mention her colleagues who she referred to as “a little family. Everyone I work with is caring, committed, wonderful,“ she said.

After so many years of service, Culver joked that she will have to join a gym since she won’t be spending her days setting up events anymore – she attributes that physical labour to keeping her healthy all these years.

But fitness is a concern she can deal with later. In the meantime, Culver shared that she has two daughters who live overseas so “the first thing we’re doing is we’re traveling. My daughters both live in London, United Kingdom so we’re going there for five weeks so it’s impossible for me to get on the phone,” she said, alluding to the fact that she had a habit of working while on vacation. “That doesn’t exclude email but I can’t make a phone call. So that’s gonna be nice.”

Culver and her husband are going to travel around the U.K. for five weeks.

Once they return, Culver admitted she hasn’t quite figured out how she’ll spend her time.

“I think I’ll be the lunatic on Main Street walking up and down saying, who needs help?! Who needs something done?!” she joked, adding that “I understand there’s a bit of a goodbye when I get back from vacation because my official retirement is February 28.”

Culver also made sure to mention how grateful she was that the “day before on the evening of our board meeting, [Ward 32 councillor Mary-Margaret McMahon] presented me a wonderful statement thanking me for my commitment. It’s nice to know that you’ve made a difference. You think you have…but it’s nice to know that I have made a difference…in at least some people’s lives.”

As for what she’ll miss the most when she’s gone, she paused, smiling while she spoke.

“I think the people that I work with…my volunteers. I’ve watched their children grow up and now come here and volunteer, get married, have children of their own and bring them here. It’s not a job it’s a relationship.”

She is irresistible, irrepressible and irreplaceable, . Centre 55 will feel her absence for a long time. She is a person who believes in returning the tax payers investment in her with hard work and tangible dedication.

Fair well, I know you will.

I enjoyed working with Nancy the few times our paths crossed. We shared a common bond in that we both drove Cadillac Cateras at the time. Mine was cursed and was involved in numerous accidents (none too serious, eh Melinda?). Nancy, on the other hand, enjoyed many more years of driving pleasure than did I…and we joked about each time we met. Good luck Nancy on your retirement. Let me tell you, you will enjoy it.