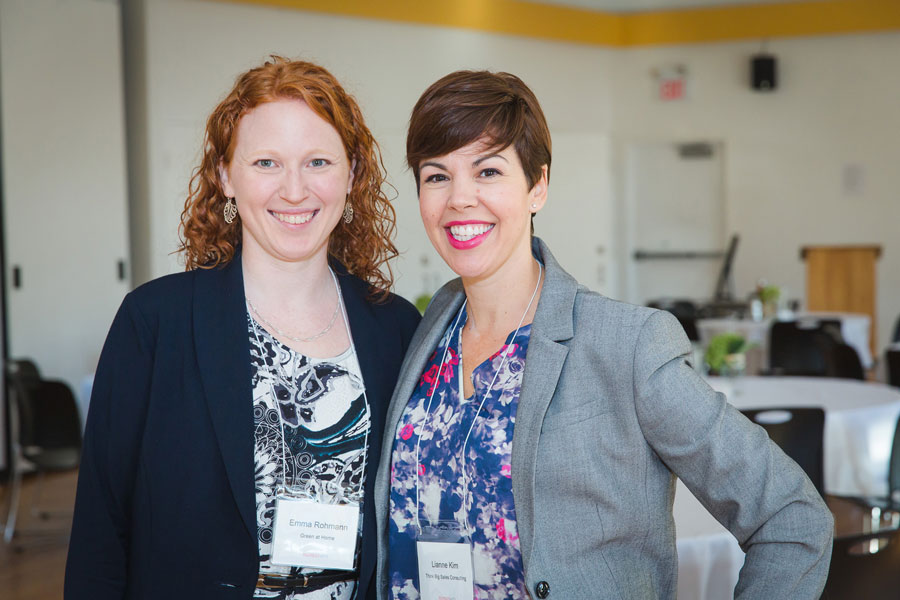 When Lianne Kim wrote a message on Facebook asking if there were any East End moms who run their own businesses, she had no idea that one question would catapult her into a new and exciting phase of her life.

The mother of two had been working in sales for 15 years when she first decided to pursue a better work-life balance. It was then that she began a small nursery art business.

While that first passion project didn’t work out, it wasn’t all for naught. It led Kim to seek out the support of other women, which ultimately led to the creation of Mamas & Co two years ago.

“Our very first meetup [was] a dark and stormy night two years ago in November,” she said. “And it was seven women who turned up literally in a snowstorm and I thought, OK if seven women are going to come out in a snowstorm we might have something here.”

And it turns out, they did have something.

Two years in, Kim and her partner Emma Rohmann have created such a large community of “mompreneurs” they decided to “make [it] a more official community with a membership,” said Kim.

The membership fee is $49 plus tax for the year and includes access to the private Facebook forum, free events, free webinars, as well as access to members only events. Members also get the added benefit of choosing which events they attend. It’s an “a la carte system,” explained Kim.

The only stipulation is that all members must be moms who either have their own business or are starting their own business. Kim said that many of the members are still in the idea phase of their business, and that’s OK too.

Mamas & Co has two streams of events. The first is a monthly meetup which is always held on the first Wednesday of every month.

That meeting is “sort of a mix of business and pleasure,” said Kim. “There’s wine, there’s food, there is an opportunity to mingle and network and get to know one another, but we usually have a speaker who will talk about either running a business or running a family, or the combination of the two.”

The company also hosts what they call “Learning Labs.” Laughing, Kim said they were “finding that our meetups were getting far too fun and people weren’t getting enough info that they needed on very critical business topics like email marketing, Instagram, Facebook… these are tools that we need to know how to use and they’re constantly changing.”

While these events are still fun and engaging, there is no food or wine in order to keep the focus on learning a new skill. The idea behind the whole concept, she explained, is to have a supportive community in which members can share knowledge, experience and skills as well as feel safe to ask questions or talk about any struggles they may be having.

“[It’s] about having respect for one another, giving and taking so it’s not all about promoting your business. It’s about how can I lift someone else up, how can I support someone else. We don’t have a lot of room for complainers or people who want to vent all the time. I’m a very positive person and I want to be surrounded by positive people,” said Kim.

It is this supportive and positive environment that has resulted in the growth of a business which Kim recently decided to focus her efforts on full time. And she and Rohmann are wasting no time coming up with a plan for the future of the company. Next month they’ll be launching webinars to ensure that members who live in other parts of Ontario can still be an active part of the group even if they can’t be physically present.

“We’d love to grow and expand beyond the GTA as well,” she shared. “So we believe that online learning is going to be a critical component for us. We’ll be offering free webinars, we’ll eventually be offering some paid webinars where people can log in and learn about a new skill with one of our experts and they can do it from the comfort of their own home when their kids are tucked into bed.”

It’s just one of the elements that sets Mamas & Co apart from similar businesses and has helped members succeed in achieving their own goals.

“There’s been quite a few women who started in the early days, [who] were just starting their business and now they’re running a profitable, sustainable business that’s growing every month,” said Kim. “I think having a lot of like-minded people that they can access at the click of a button has a lot to do with that.”

Having already achieved so much in a short period of time, it’s easy to assume there will be many changes and opportunities for growth for Mamas & Co in the months and years ahead.

I like the sound of your organization. I too have alway wanted to help others but didn’t know how.
Right now we hand out gift cards to coffee shops to those less fortunate.