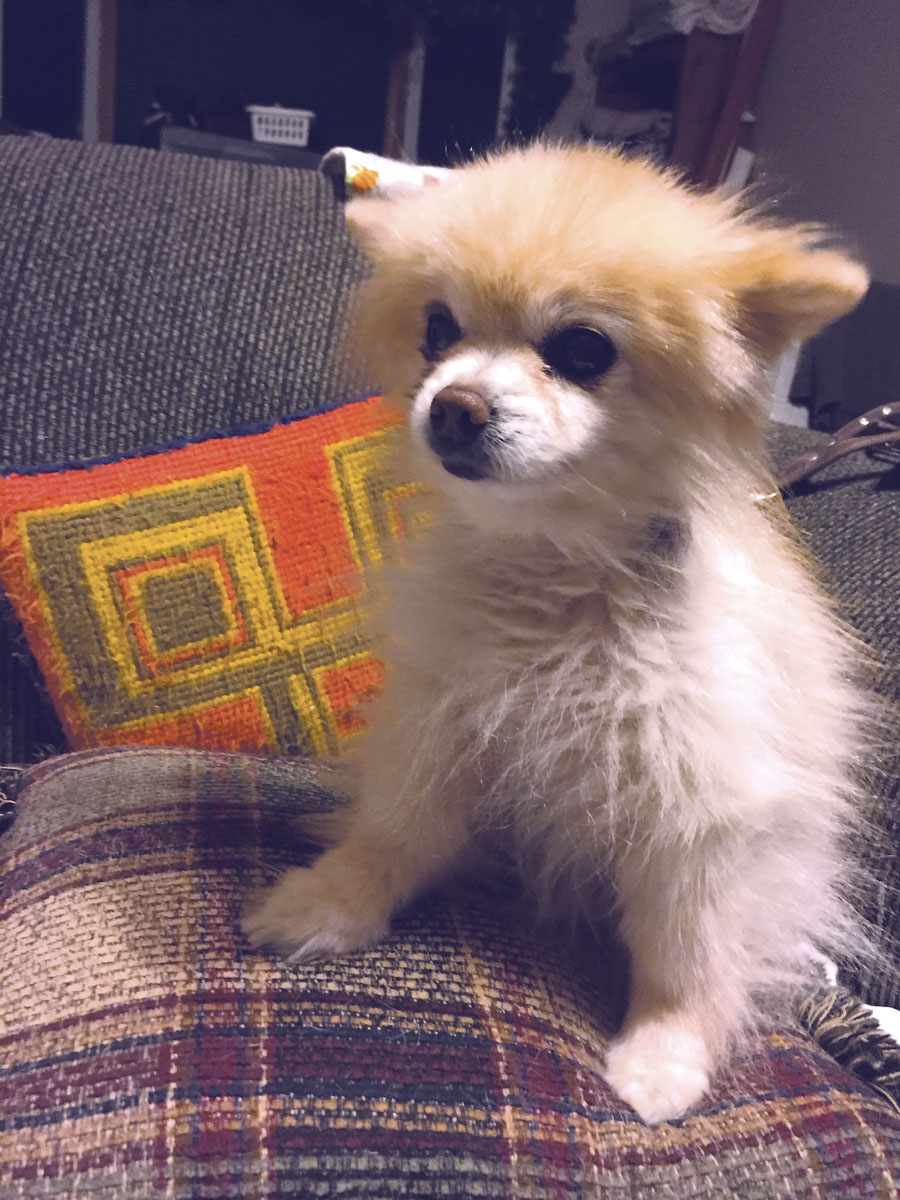 Stella sits on her throne at Sheba's Haven. PHOTO: Submitted

Meet Stella. The approximately 11-year-old fuzzy-faced Pomeranian photo-bombing this page with her explosive cuteness was indeed named after the Tennessee Williams’ character. But that’s pretty much where the similarities end. There are no streetcars named Desire in this tale and no Marlon Brando bellowing for Stella to come home either.

But we do have our share of kind strangers!

On a cold November night in 2015, Stuart and Daryl of Bow Wow Acres Rescue were driving along a dark country road when they thought they spotted an injured cat. Of course, they came to the poor thing’s rescue but soon discovered she wasn’t a cat at all. She hardly resembled a dog either, looking more like a knotted up ball of wool with two black button eyes peering out.

Under the stark fluorescent lights of the examining room at the veterinary clinic, much more was revealed. Their mystery mop was covered in fleas and ticks. She had but one tooth with which to chew, and a rather significant heart murmur sounding the alarm bells for her rescuers. In their work at Bow Wow Acres, Stuart and Daryl focus mainly on the rehabilitation and re-homing of large breed dogs with behavioral issues. This sweet little girl needed a special place devoted to bringing happiness back to the hapless. They knew just the place!

Practically neighbours, Catherine and Bill of Sheba’s Haven Rescue – a sanctuary for palliative dogs – are roughly only a half hour south of Bow Wow Acres near Kingston. When no one came to claim her, a freshly detangled, flea and tick-free Pomeranian now called Stella, headed towards the Haven. She may be the smallest resident but Stella has boldly appointed herself “Queen of…Sheba” regardless. While she is quite capable of commanding authority at ground level, Her Highness is never opposed to getting on her high horse, so to speak, cradled in Bill’s ever-loving arms. The view of her kingdom is spectacular from there. Moonlighting as “Daddy’s little girl” has its advantages.

But it hasn’t been all a game of thrones for Stella. Even the aristocrats of Downton Abbey have their bad days. No matter. In good times and bad, the Haven shows us how special a place it can be for special dogs like Stella.

Soon after her arrival, Stella had a full medical work-up confirming her heart murmur to be at a grade level four – the worst being six. Fortunately, she was showing no symptoms of heart failure at the time and accordingly didn’t require heart medication. The Queen was able to rule her roost without health issues obstructing her way, at least until spring. That’s when Stella took a turn for the worse. She lost her appetite and her desire to rule. Rushed to the vet’s, they discovered the tick infestation had resulted in a diagnosis of Lyme Disease. Stella was immediately put on a course of antibiotics which did wonders for her. She was back to roost-ruling in a week’s time.

Stella has drawn in the crowds since her coronation and has had her share of adoption inquiries. But more often than not, the Haven remains home for terminally and chronically ill dogs like Stella. Many of them have been abandoned by their owners for this very reason. But here they are embraced by Catherine, Bill and a bubbly team of dog-loving volunteers. One might say it’s heaven on earth until the real heaven calls them home. Case in point: whenever I visit, I find myself following a flurry of wagging tails out to the expansive property, instantly breaking into song. I may not have been blessed with Julie Andrews’ voice, but on the Haven’s hills, I can never resist the urge to belt out “The hills are alive with the Sound of Music!” while the dogs do their best to bark over me.

Stella’s heart is starting to show signs of trouble as of this fall. Her murmur has increased to grade level five and she’s on heart meds now. But she’s still the Queen of Sheba’s Haven. As the Queen, she has many responsibilities like ordering the human servants to expedite things at mealtime. She uses a combination song and dance routine to accomplish this task. Given her royal status, Stella usually refrains from actually playing with the other residents. There is one exception. She has a soft spot for a dog named Prince which stands to reason given his title. Otherwise, you’d never understand why she’d want to engage a deaf and blind Bichon mix of 17 who hasn’t the foggiest idea what she wants. Stella’s duties also include regular royal excursions to two local nursing homes where she delights the residents with barely an effort. Striking the puppy pose at lap level has them melting like butter every time.

Back at the palace when the day is done, Stella assumes her other role as Daddy’s Little Girl cuddling up with Bill on their spot on the couch to watch TV until they both fall asleep. It’s her favourite time of day. It’s also all the proof she needs. There are no such things as strangers, only friends we haven’t met yet.

Looking for the perfect gift for the animal lover who has everything? Make a donation in their honour to a very special place this Christmas –- Stella’s palace in the country otherwise known as Sheba’s Haven Rescue (www.shebashaven.ca)! Happy Howlidays, everyone!