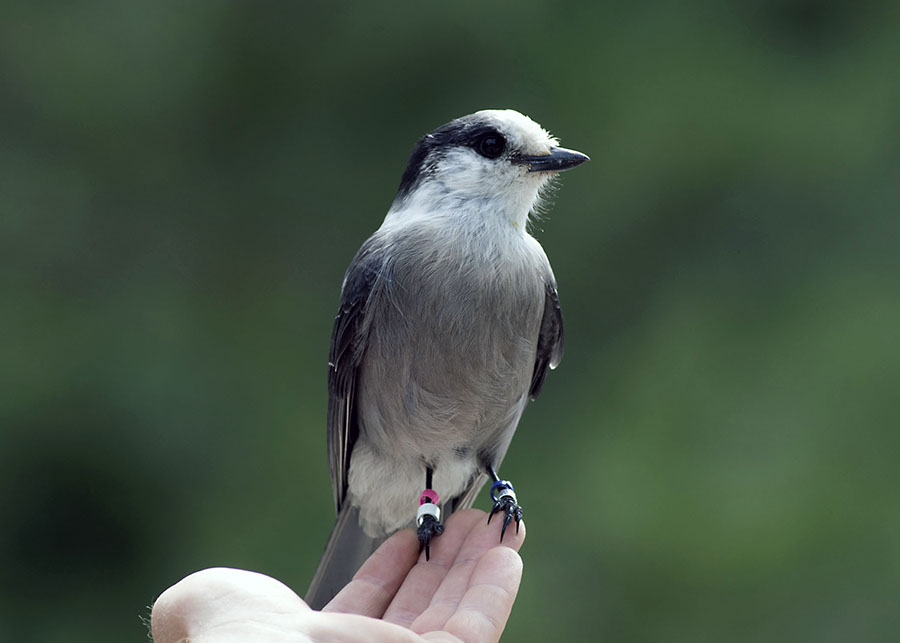 Can you believe it is December already? The past month we had both very warm and very cold weather and humans aren’t the only ones confused by it. Has anyone else noticed the flocks of geese flying south on Monday and then north on Tuesday? I think that’s the bird equivalent of trying to decide when to put on your snow tires.

The big birding news of the season has to be the new official Canadian bird: The Grey Jay. Also known as the Whiskey Jack or Canada Jay. I’m not saying I would have voted for the Grey Jay, but let’s see if, when I’m done, you might find yourself thinking that this truly is a bird with a Canadian heart.

Grey Jays are survivors and have been in Canada for thousands of years. The bird’s name was derived from both the Cree and Algonquin languages: Wìsakedjàk in Algonquin or Wìhsakecàhkw in Cree. They are part of the corvid family (Blue Jays, Crows and Ravens), and they are one of the smartest birds on the planet. One sign of their intelligence is their opportunistically friendly behaviour. For example, if you put food on your hand, especially cranberries, they will come down immediately to take advantage of the situation.

While some other popular Canadian birds – looking at you Canadian Geese – abandon us for warmer weather, the Grey Jay not only winters in Canada but can nest their eggs in -30C! Add to all of this the fact that Grey Jays are found in every province and territory and you’ve got yourself a truly Canadian bird. Although chances of seeing one of these guys in the Toronto area is quite low (it is Blue Jay territory after all), a short drive to Algonquin Park should give you a great chance to spot a few.

This past month we were visited by my cousin Jef Beintema, one of my husband’s cousins from Holland, and he was thrilled to see this bird circle his head and then land on his hand for a treat. What an experience for his first wildlife sighting of the trip! If Algonquin is too far for you, I’ve been lucky enough to see a few of them in the Kawarthas.

Now I have one more quick story, not my own but from a friend Lesley Sheppard, that I just have to share:

“On November 4 I was dog-sitting for a friend in the Kingston Road and Southwood area when a contractor working on their home came running up to the front door exclaiming there was a deer in the cul-de-sac. I rushed out with my iPhone hoping to catch a glimpse of what I assumed was a doe and/or a fawn. I was astonished to see a majestic buck resting in the neighbour’s backyard. I quickly stopped my rushing – those antlers aren’t just for show after all – and I stood behind a tree to interfere with him as little as possible. Despite my efforts, I swear our eyes met for a few moments before he was heading back into the ravine to continue his urban adventure. Thanks to Taanis Smythe, a neighbour who shared the photo, below.” (Thank you for sharing, Lesley Sheppard.)

The grey jay is not the new ‘official bird’ of Canada. It’s the recommendation of the Canadian Geographical society. They can’t ‘officialize’ anything. Our Parliament is the only body that can designate an ‘official’ national anything. IMO it’s a dumb choice. Small, drab and uninspiring.

I found an injured on in Brookings Oregon.