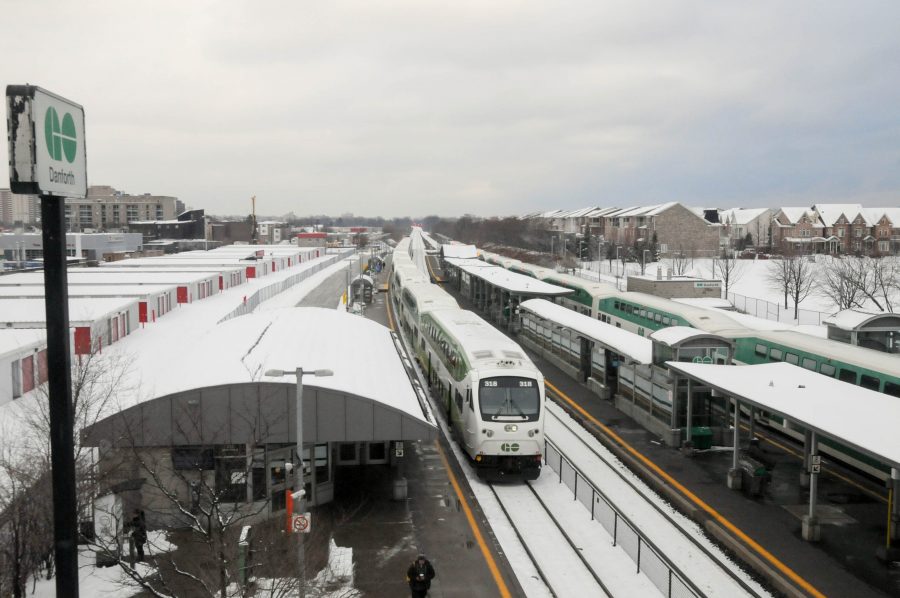 You probably received a flyer this fall urging you to “Shape the future of transportation in your community.”

It was an invitation to open houses (three of them local-ish) put on by provincial transit agency Metrolinx, which plans to install a fourth track and overhead wires on the GO corridor for its Regional Express Rail plan and for SmartTrack, an enhanced version of RER for the city that helped John Tory become mayor in 2014.

My sampling’s not scientific (15 or so meeting attendees), but I’ve yet to meet any who feel Metrolinx showed genuine interest in the East End’s transit needs – and as we showed in a previous column, transit deficiencies have become huge in recent decades.

Like it or not, we’re in for another round of noisy construction and bridge-rebuilding disruptions. And for many who live near the corridor it is coming while nasty memories remain fresh from work to add a third track just a decade ago.

Some rightly ask why Metrolinx couldn’t get it right the first time, and why our area is now being told to settle for lots more trains roaring through without new stations allowing us to ride them too. Maybe most alarming is that when the work is done in 2025, and Metrolinx rolls out 15-minute regionwide service, we’ll likely have to start all over for a fifth or sixth track.

RER and SmartTrack contain the germ of a great idea: Intensified use of an existing corridor without the need for costly tunneling (it’s been done in other parts of the world with great success). Electric trains are quieter and can accelerate and brake quickly – allowing for more frequent stops without seriously slowing travellers.

But hope is slipping away that some of the billions the province plans to spend on transit will significantly help in the East End. Metrolinx staff indicate the best we can hope for is a kiss-n-ride facility at GO Danforth and a long bridge or tunnel connecting the station to the subway at Main. They mentioned the downtown relief subway line is being studied (though that idea was closer to reality when plans were approved 47 years ago, and even if it’s ever built it won’t come far enough east to help Beach Metro readers).

Tory the candidate promised SmartTrack would piggyback onto RER to provide “subway-like service” for a TTC fare. But Tory the Toronto mayor seems more concerned that SmartTrack serve Markham and Mississauga than a part of his city where public transit’s competitiveness is in decline. He’s satisfied with 15-minute service even after a recent city report found five-minutes is key to SmartTrack’s success.

Planning District 6 (roughly the four old-city and East York wards bisected by the Danforth subway) generates the second most downtown trips of any Toronto PD, but now has the lowest percentage of transit users for such journeys while driving increases.

We all – transit users and drivers – should be pushing hard to have decades of TTC service cuts reversed. But in the  East End it’s time to demand new SmartTrack stations – Coxwell and Birchmount make the most sense to some transit planners I’ve spoken with confidentially.

It’s 5.3 kilometres from GO Scarborough to our only local GO stop, at Main. It’s another 4 km to a planned station at Gerrard Square. That’s suburban spacing on an urban stretch of the line – a 25-minute walk either way from Coxwell (where I live), when 10 minutes is a recommended maximum. Other parts of SmartTrack, including in suburban Scarborough, are slated for 2-km spacing despite generating far fewer downtown commutes and already having far higher percentages of those trips captured by transit. (Scarborough is also getting a costly Bloor-Danforth extension that will aggravate subway crowding in our area.)

Adding stations and operating five-minute service, however, requires Metrolinx to think beyond 2025, when RER is supposed to be up and running all-day 15-minute service across the GTA. If planners had thought long-term when putting in the third track a decade ago, adding the fourth now wouldn’t be such an ordeal. Some experts tell us (off the record) that for long-term cost-efficiencies and to ensure everything is easily scalable, we should go all in and prepare now for at least five tracks and a modern signaling system.

One transit professional from a firm that does work for TTC and Metrolinx calls the incremental tack, “Myopic, wasteful, crazy; it’s politicians fixated on short-term budget and election cycles.”

He also figures stations at Coxwell and Birchmount ($50-million apiece, but not on Metrolinx/SmartTrack radar) would create more new transit riders than the $3.2-billion subway extension to Scarborough Centre.

“Metrolinx’s suburban mindset needs a big rethink if the plan is to connect and pay back in urban Toronto,” says Matt Canaran, who can speak freely now that he’s resigned from Metrolinx’s planning department. “They’ll be hungry for riders – just like Union Pearson Express. People in this part of the city should be a big part of their plans.”

Other planners point out there’s a caveat in all this, even if we do RER/SmartTrack right: Capacity’s finite at Union Station and on GO’s corridor, meaning we should think of this as borrowing capacity 905ers will eventually need. They also stress that none of this reduces the urgency of a new subway into the core.

But for now, we really do need to “shape the future of transportation in (our) community” and Dec. 14 is Metrolinx’s deadline for feedback on the RER/SmartTrack corridor (see metrolinxengage.com).

Stephen Wickens, a life-long East End resident and a semi-retired journalist, has worked four-plus decades at four Toronto newspapers. He’s on stakeholders’ advisory panels for the Downtown Relief Line and city planning’s Danforth Avenues study as well as chair of Danforth East Community Association’s Visioning Committee. This column is part of a recurring series tackling urban issues in the East End. Find him on Twitter.

Greater Scarborough has far more dire transit needs both local and direct connection to core job areas than the Beach..

But Ill join in the critique of Smartrack alone as a stop on Ellesmere as originally planned and then change Lawrence to a subway stop would also be much more optimal.

Scarborough Center is the starting point in providing the real neglected Citizens of this City integrated transit. The LRT/BRT plans can feed in and around and we are going to pay for all of it as we should.

You have beautiful streetcars on both you main streets which actually negatively Scarborough drivers who have little choice as TCC commutes are hell for most and or car commutes or double fare, long wait TTC and GO to get to decent jobs. The Beach is also in a decent proximity to a subway station. Most populated areas in Scarborough are not even close.

I get we all have needs and want to see better funding but enough with BS against a long overdue inclusive integration of Scarborough Center. When the majority of populated areas in Scarborough has transit like the Beach your concerns will be taken more serious im sure.

RE: Mike Nanse …. I don’t see why you’re interpreting this as Beach v. Scarborough (and from what I’ve read of the articles, the Beach is just a small part of the PD6 area that had its transit decimated since the 80s). We all want to see transit improved in Scarborough, too (and we also regret the bad choices politicians and planners have made over the years in Scarborough). But subway trains rolling through our neighbourhoods are no good to us if they’re too crowded before they get here in the morning? When one of the top sources of downtown commuters has the lowest percentage of transit users, something’s wrong. What I take away from the columns is that doing SmartTrack right could, at a relatively good price, be very useful to the east end (and southwest Scarborough), areas with lots of commuters who are giving up on transit. That’s no threat to Scarborough. Let’s not get all territorial about this stuff.