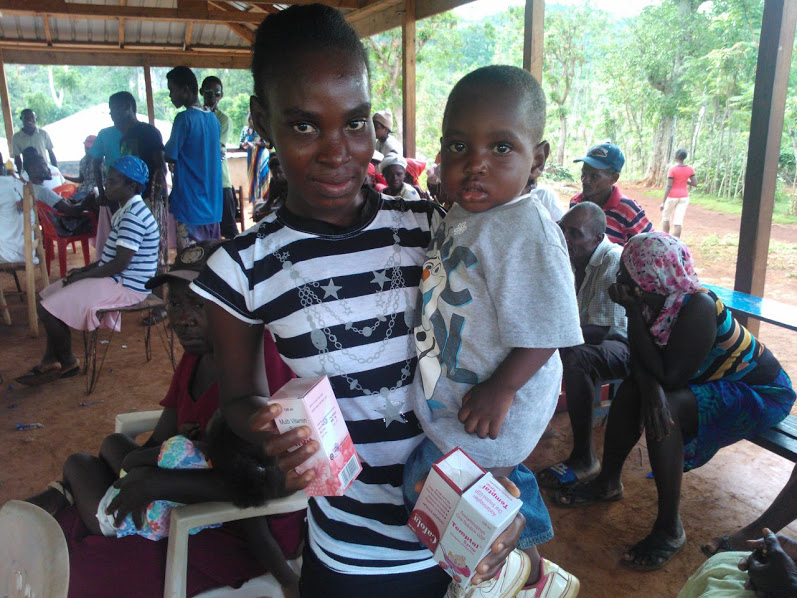 A mother poses with her son in Haiti after receiving aid from Jericho Mobile Clinic. PHOTO: Submitted

When Keteline Pierre walked into the coffee shop on November 15, she looked bright-eyed and hopeful, her smile wide as she stuck out her hand to introduce herself.

Her composed nature belied her past experiences: massive devastation, disease and starvation. In Haiti, Pierre has been witness to exactly that.

Pierre speaks eloquently as she begins to describe her work with Jericho Mobile Clinic, a non-profit mobile medical clinic that provides free health care services to people in Haiti who would otherwise have limited access to such services.

She is one of three people who founded the clinic – a registered Canadian charity – in 2007. Each of them is a doctor by trade. While she has been in Canada for over 40 years — living first in Montreal before moving to the Beach area in 1990 — Pierre is originally from Haiti.

Initially, she said she was “not so very, very involved…but I went to Haiti and I said, ‘Wow…I want to be involved.’”

Pierre works with the doctors who are stationed in Haiti to ensure they have the proper medical supplies they need to help the Haitian people.

“Doctors have been buying in Haiti certain drugs, and what they cannot buy in Haiti, they send me a list. And I have a list of everything they need for infections, for pain,” she said.

She went on to explain that the team, which consists of about 17 members including doctors, nurses, and health agents, is currently situated in a Haitian village called Ville Lagresse. It’s one of the areas hardest hit by Hurricane Matthew, which has left the country reeling since it hit in early October.

“When the doctor called me yesterday to report what’s going on he said it’s complete despair. People have zero food, zero water. Nothing. Because everything was devastated,” she said.

Hurricane Matthew slammed into Haiti on October 4, 2016 ripping roofs off of houses, causing rivers to swell and in some cases leveling entire towns. The hurricane ultimately took the lives of more than 800 people and left a trail of despair in its wake.

“They said they never saw such destruction,” Pierre said, referring to her team in Haiti.

“It totally destroyed the south of Haiti, very close to the sea. When they say destroyed they mean 98 per cent. Nothing is left. So there are one and a half million people homeless in this area. There’s no crop, there’s no animals, there is nothing.”

She paused, taking a moment before explaining that “usually doctors are prepared to face these realities.” But she was not prepared for the reality presented to her by another doctor who told her bluntly, “I think Haiti’s finished. It’s finished. These people are going to die of hunger because there are too many. Just too many and no food. Nothing. No water, no food,” she said.

Her composed nature became noticeably more distressed as she spoke about the realities of the situation. Breathing out deeply, she said, “when he said that to me I needed to go lay down because I really did not know what to say to him. It’s overwhelming.”

Prior to the hurricane, Jericho Mobile Clinic had been focusing almost solely on delivering medical attention to the people of Haiti “but now we have to provide food too. Food and water. So it becomes such a huge challenge for Jericho,” said Pierre.

Her aim is to educate people on the situation in Haiti in the hopes that more will donate or volunteer so the people of the country can start to rebuild. Pierre has made appearances on CBC, CTV and has visited schools in order to let people know what happened and how they can help.

“We would like people to be involved by contacting us,” she said. This is so that people can understand the costs of the items they need and what they can put their money towards, she explained.

For example, “we want to start working their land right away in order to produce food,” she said. “A lot of people give us money to buy animals, or buy a cow, or maybe buy a [pig] or something in order to help them rebuild.”

Water is also a crucial issue, with Pierre noting that purifying water tablets are an essential item for the region as well. According to the World Health Organization, the number of suspected cholera cases was up to nearly 6,000 by the beginning of November. Many of these are attributed to drinking contaminated water that had mixed with sewage during the storm.

“Those tablets,” said Pierre, “we can find them in Haiti and they can buy 10 tablets to purify water, let’s say for maybe a day that cost about two dollars Canadian. So people will drink [clean water] and that will afford these people to get [healthier].”

Despite the fact that relief efforts are only just beginning on what feels like a dire situation, Pierre remains optimistic.

“The suffering is extremely painful,” she said. “There is no school, there is no church, there is nothing. But with help, one day at a time we will rebuild.”

“You cannot say it’s so overwhelming. You have to be full of hope.”