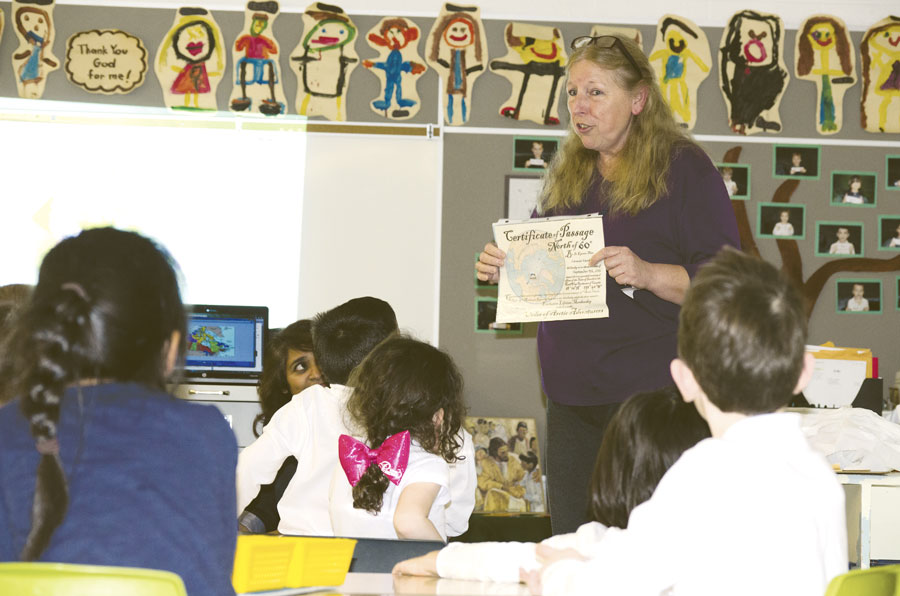 It was a simple message in a bottle, but it led to an experience that Carmen Vanderreest and the kindergarten class at St. John’s Catholic School will never forget.

Last year, Vanderreest decided it was finally time to take a trip that she had been dreaming about for years.

She had originally planned to take a road trip along the Alaska Highway but as she planned the adventure, she realized she wanted to do so much more.

Vanderreest would be traveling by car from Edmonton, Alberta – making stops in the Yukon, Inuvik, Northwest Territories, Alaska, British Columbia and Alberta.

But before she left, she met with Ms. Valentini’s kindergarten class at St.John’s Catholic School to help them create a message that she would carry with her on the journey.

“I had asked the kindergarten class of St. John’s School to make me a ‘message in a bottle’ that I would take on my trip and then throw into the mighty Mackenzie River, which flows out to the Arctic Ocean,” said Vanderreest.

The hope was that someone would one day find the bottle and the message contained therein.

‘We bring you peace,’ read the message. It was surrounded by a heart and signed by the children in the classroom. Vanderreest had laminated the note to keep it safe from the water, and placed it carefully into a glass bottle.

The message also included instructions asking the person who located the note to call the school and let them know if it had been found.

And so, bottle in hand, Vanderreest set out on her trip – traveling up to the great white north, ready for a journey that would take her through wilderness adventures that included mountains, rivers, and up close encounters with caribou.

When she finally got on the boat that would carry her to the Mackenzie River, Vanderreest said she made sure to first ask the captain of the boat if it would be ok to throw a bottle overboard.

The captain confirmed it was fine, but according to Vanderreest he looked at her a little perplexed when she asked his permission. Apparently “no one had ever asked to do it before!” she said.

Much to her surprise, it wasn’t long before the bottle was found.

“About two weeks later and maybe 600km of river travel, that bottle was found on the shore of the Beaufort Sea near Tuktoyaktuk!” said Vanderreest.

The Beaufort Sea is located just north of the Northwest Territories, Yukon and Alaska, and is part of the Arctic Ocean.

Even more exciting than the bottle’s discovery however, was what was found beside it.

The bottle was located lying beside an enormous prehistoric mammoth bone, which is now on its way to the University of Alberta to be studied.

Vanderreest returned to Ms. Valentini’s class on October 27 to delight students by sharing the details of her journey which included photos, a bear claw and a certificate of passage.

While the trip may be over, the adventure continues for Vanderreest and Ms. Valentini’s kindergarten class as they wait to hear more about the prehistoric discovery that was all thanks to their message in a bottle.