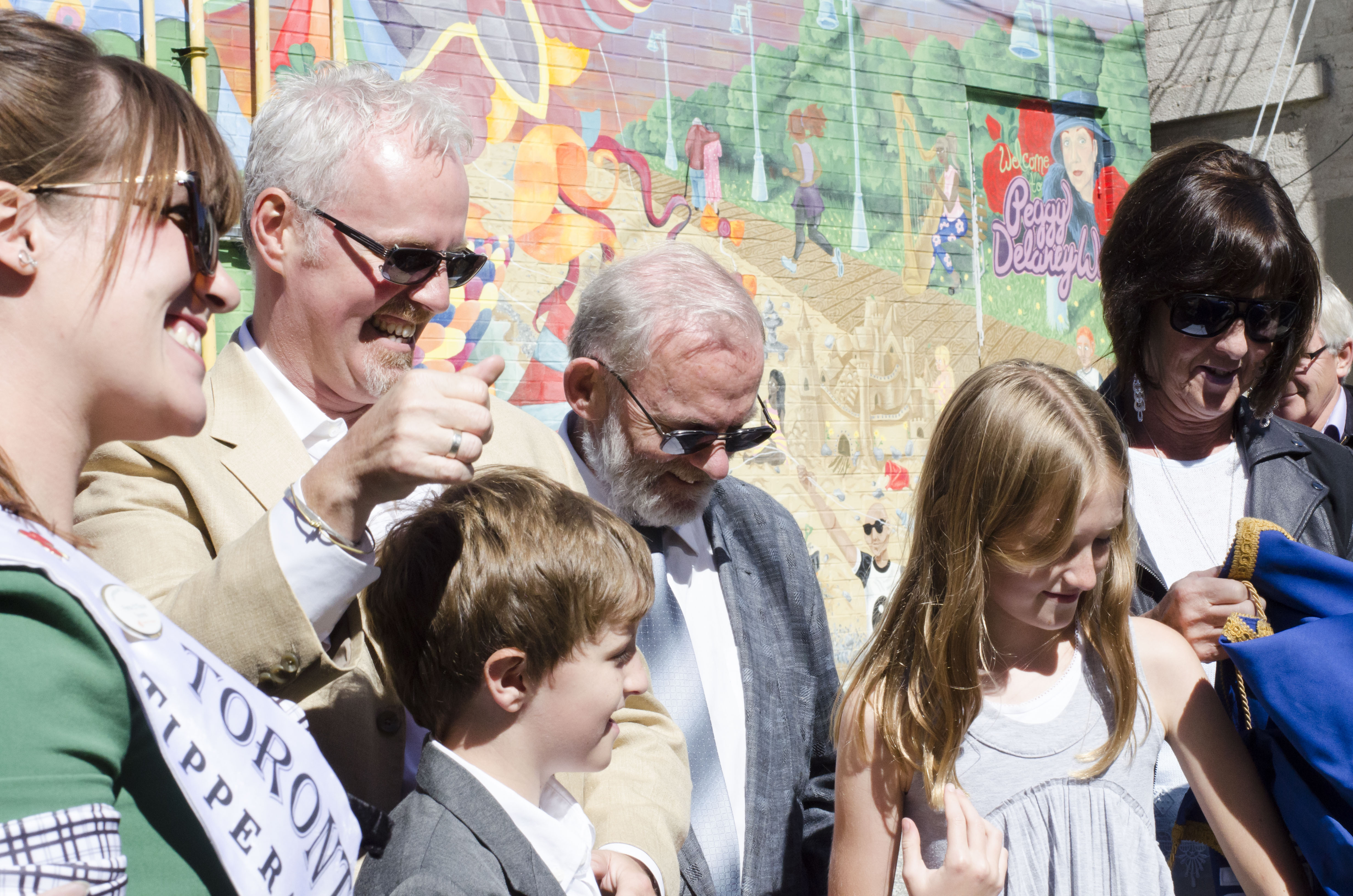 Widely regarded as a remarkable woman, there is no question that the late Peggy Delaney left her mark on the hearts of many.

Now, she has also left her mark on one of Toronto’s newest laneways, aptly named Peggy Delaney Way.

Peggy was born in Dublin, Ireland on June 1, 1924. Described on the Peggy Delaney Way Facebook page as an “energetic, gregarious, and talented child”, Peggy spent her life aiding and enriching the lives of others.

In 1939, at the young age of 15, Peggy contracted spinal meningitis. The illness was so bad it resulted in blindness for nearly a year. But she did not let this experience get her down. As soon as she regained her vision, she began to volunteer at the local hospital, assisting nurses and tending to underprivileged children.

Patrick O’Shea, one of Peggy’s sons said that “even when she was tired she’d keep on going. She’d somehow dress to the nines every day. Even if she was sick, you wouldn’t know it. If she had something to do, she’d get it done.”

Peggy continued to follow her passion for philanthropy throughout her life and was involved in countless initiatives to help those in need, both in her community and abroad. When she moved to Toronto in 1954 with her husband, Cormac O’Shea, she immediately became involved with the United Way, quickly became an integral part of the Irish community, and was a fervent champion of the arts.

It was for these reasons and many more that friends, family and admirers gathered on Sunday, Sept. 25 to attend the official lane naming ceremony to honour and remember Peggy. A bright mural, sponsored by Community Centre 55, was also unveiled at the ceremony.

Standing at the podium overlooking the crowd, her youngest son Rory O’Shea explained that, “she really helped shape and nurture the local cultural scene.”

Reading from a letter written by Jim Kelley, Ambassador of Ireland to Canada, he continued, “The strength and endurance of Irish-Canadian friendship rests on the life’s work of people like Peggy Delaney. It is therefore entirely appropriate that Peggy Delaney Way should now join the long list of place names and street names that honour the strong and positive contribution that the Irish in Canada have made to the fabric of Canadian life as we know it today.”

The legacy of Peggy Delaney will live on in memory, as well as the lane and mural in her name.

But as her close friend Eithne Heffernan said, “her likes will never be seen again. She was elegant, she was gracious, she was witty, she had charm. She was an absolute lady.”

One of Peggy’s favourites quotes, she said, was, “when you get lemons, you make lemonade.” Smiling, Heffernan paused for a moment. “To me, Peggy made the sweetest lemonade.”

Peggy Delaney Way can be found south of Queen Street between Lee and Leuty Avenues.