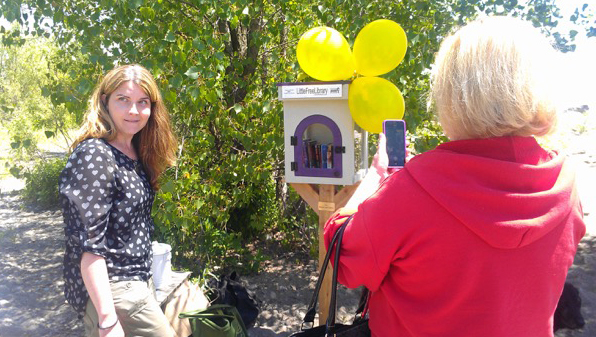 If you’ve let your dog out at the Kew Beach Dog Park over the last several weeks, you might have noticed that the little free library at the western edge of the park is no more.

As of last week, the only portion left of the free library – part of a worldwide movement focused on building special spots to share books – is its post, featuring a plaque that reads “For Marion and Baker”.

But fear not, dear readers – Beach social media users were quick on the case of the destroyed library, posting suggestions about what might have happened to it (the general consensus: vandals used it for firewood) and what could be done to replace it.

Before long, Katharine Reid, the woman who installed the library over two years ago jumped into the conversation, and plans have been launched for a fall fundraiser to raise money to purchase and install a new library.

Beach Metro News spoke with Reid about the library’s history, her love for her dog, and the Beach community’s response and generosity.

When was the little free library first erected at the dog park, and why did you decide to build one?

The Little Free Library was installed in the Kew Beach Dog Park in June of 2014. My family had been part of a class action lawsuit after losing my grandmother to a bacterial infection she’d contracted in the hospital. Each grandchild received a cheque for $393. I wanted to do something special with my settlement money and decided to purchase the library from LittleFreeLibrary.org and place it in my dog’s favourite place: Kew Beach Dog Park.

Can you tell me a bit about who the library is dedicated to?

KR: The Library was dedicated to my grandmother Marion, and my dog Baker. Baker was my hero (and was alive at the time) and had fought and conquered a very aggressive form of bone cancer (osteosarcoma). He’d been through chemo and lost a foreleg to the disease. I wanted to commemorate his heroism and life. He taught me so much about living, and I knew once he was gone, I’d need something or somewhere to honour him. He loved swimming at that park and I knew it was the perfect spot for a Little Free Library.

Baker was euthanized in December of 2015. He was 13 years old, lived a full life, and his three arthritic legs just couldn’t support him anymore. He was in a stroller most of his time outside and could no longer swim. I knew it was time. He was a four-year cancer survivor and the disease never got him. Since his cancer diagnosis, I have become active in the Smiling Blue Skies Walk to End Canine Cancer.

Who was involved in its building and maintenance, and can you tell me about the Toronto Beaches Dog Association (TBDA)?

I got in touch with Ward 32 councillor Mary-Margaret McMahon to find out how to go about putting the library in the park, and she put me in touch with Stuart Slessor, the Parks Supervisor. They were very helpful and efficient, and once I got the go-ahead from Stuart, it was game on! I put a call out on Facebook for someone to help with installation of the library, and a local carpenter volunteered to install the library free of charge. We even had a grand opening/book drive for the library when it went in.

Since its installation, I have become the co-president of the Toronto Beaches Dog Association with my best friend Heidi Leigh. She and I placed the library under the association’s umbrella when we took the reins. For the first year-and-a-half, I lived a block away and maintained it myself, but since moving a little further away, the TBDA has had a volunteer steward (Adrienne Kassen) checking on it weekly. In fact, she’s the one who informed me of its destruction.

What did you think when you heard someone had taken it down?

I was surprisingly calm when I found out the library had been destroyed. At first, I thought it had been stolen, but through information and photos on Facebook, it became clear the library had been smashed. If it had happened when Baker was still alive, I think I would’ve been devastated. Since losing him though, I have a very different perspective on what matters and what doesn’t. I can’t lose him twice. The library was just a wooden box, not my beloved dog or grandmother. When I made the decision to put it in the park, I knew the risks and accepted them. I refuse to live my life in fear of what vandals might do.

It sounds like you’re confident the library can be replaced. What’s that process going to be like?

It absolutely can and will be replaced. Many people have gotten in touch offering to help. The Toronto Beaches Dog Association is going to have a fundraiser on October 8 at 7 p.m. at St Louis in the Beach to get the funds to purchase and install a new library. Seeing the community disappointment and outrage at the library’s destruction has been eye opening. I really didn’t realize how much people appreciated it being there. The sense of community it has inspired is actually pretty incredible. A new library is definitely going to happen.

May 13/2017: The door and roof of the Free Little Library in the Beaches Dog Park were damaged about a month ago. Cleaning up my basement after some flooding in last week’s storm, I found a piece of plastic glass the right size to replace the missing door. So, Marion and Baker’s memorial “Free Little Library” is operating again. See picture below: