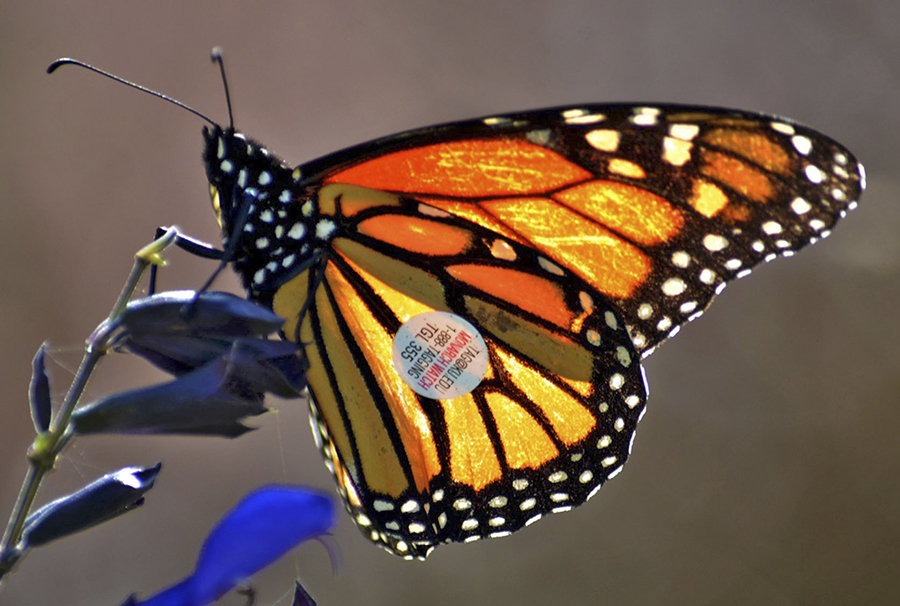 If I asked you to think about migration, your first thoughts might be of Canada geese honking overhead in their famous flying V. What else comes to mind? Robins heralding spring’s arrival? Maybe you’ve lived on the coast of one of Canada’s oceans and think about whales that swim all the way from the arctic to the warmer southern oceans.

How long into this thought experiment would it take for the incredible voyage of the monarch butterfly to come to mind?

Of all the animals previously mentioned, consider how far they travel compared to their size, speed, and even their spot on the food chain. Now think about this: each fall monarch butterflies migrate 3,330 kilometres from Toronto to Mexico. They fly up to 200 km per day, meaning it takes more than a month to travel to the mountain forests in Mexico where they hibernate in oyamel trees. This Southern Ontario-to-Mexico migration has been going on for thousands of years and over 200 million monarchs from North America join in on the annual trek!

If 200,000,000 butterflies seems like a lot – and it is – think about the odds of finding a specific Scarborough monarch among them in Mexico. Scarborough citizen scientist Terry Whittam has been tagging monarch butterflies at Rosetta McClain Gardens during the fall migration for the past few years.

Why Rosetta McClain Gardens? It sits 200 feet above Lake Ontario and we believe the monarchs navigate this area by using the Scarborough Bluffs. Just like most of our birds of prey, monarchs will not risk flying across Lake Ontario, instead opting to fly around it. As the monarchs fly by the park, they see a giant nectar meal station where they can feed, fatten up – as much as a butterfly can – and rebuild their energy reserves for the next leg of their trip.

If you go to Rosetta McClain from mid-August to mid-October, you will likely find Terry busy catching, tagging, weighing, and measuring the fore-wings of the butterflies. These measurements, along with the approximate number and general condition of the monarchs, are examples of citizen-gathered scientific data being used to monitor their migration.

Terry received very exciting news on Facebook this March: a tag of his was recovered in the monarch biosphere reserve near Cerro Pelon, Mexico. Think about what an amazing feat it is, considering the weather, temperature, and predators, for a monarch from Toronto to survive such a trip. Terry later found out that three more tags were recovered, bringing our recovery average to over 1 per cent.

So if you go down to Rosetta McClain in the fall and see a man running around the park with a butterfly net, ask him if he is tagging monarch butterflies. If you are lucky he will be Terry (and not just a crazy person), and you might not only see him catch and tag one, but he may even let you release it.