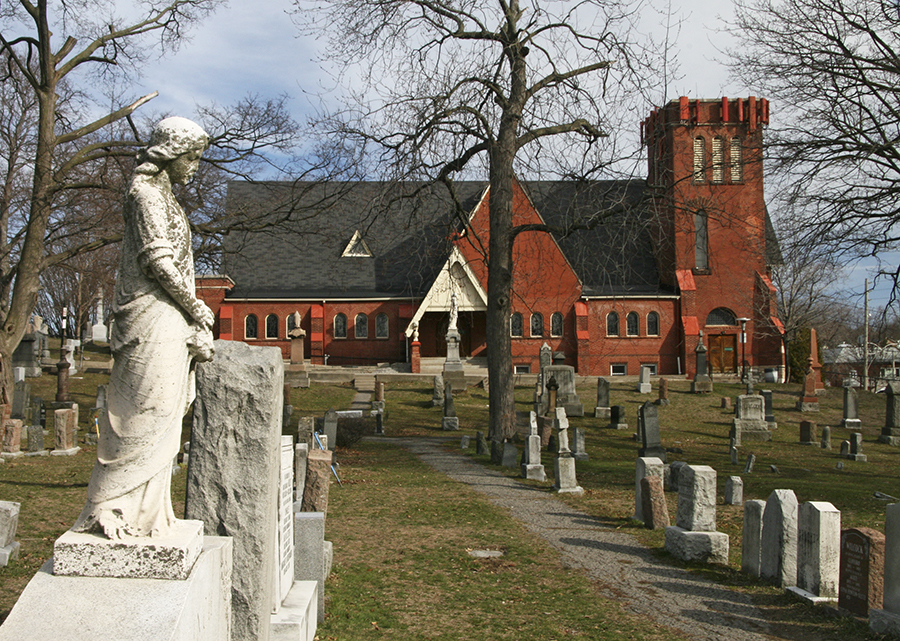 April is the cruelest month, breeding
Lilacs out of the dead land, mixing
Memory and desire, stirring
Dull roots with spring rain.

Take a walk through St. John’s Norway Cemetery at Kingston Road and Woodbine Avenue and you will pass the grave sites of prominent Beach citizens like Ted Reeve, R.C. Harris, Dr. William Young and the Ashbridge family.

There are no buildings or memorials named after Victor Francis Sunderland, who lived quietly in the Beach for more than 50 years before his death in 1973. Sunderland survived two of the great tragedies of the early 20th century: the sinking of R.M.S. Titanic and the First World War.

Sunderland’s first-hand account of the great ocean liner’s last moments became part of the narrative of James Cameron’s 1997 hit movie Titanic. Like the fictional Jack Dawson (Leonardo DiCaprio), Sunderland was a young lad sailing as a third-class passenger on the maiden voyage of the ill-fated ship.

April is a time of hope and new beginnings. At 20 years old, Sunderland was leaving England for a fresh start in North America. As fate would have it, he became one of the few men among the third-class passengers to survive in the early hours of April 15, 1912. There were no places in the lifeboats that night for third-class men and chances of survival were slim.

Some of the incidents in Cameron’s film were taken from the accounts of survivors like Sunderland. In a 1912 newspaper story Sunderland described the scene:

“The boat deck was crowded on the starboard side. The crew was filling the boats with women and children and lowering them away. An old lady and an old man with a white beard stood together. An officer told the woman to get in the boat. She put her arm around her husband’s shoulder and said, ‘Let me have my husband.’ When she was told she must go alone, she said, ‘Then I will die with him.’ That was the last I saw of them.”

This couple was Isador and Ida Straus, last seen sitting on deck chairs, not lying in bed as in the movie, which took liberties with the truth. British critics were especially upset at the unfair depiction of officers. Sunderland believed that an officer did shoot a man in a lifeboat and then shot himself, but there is no proof it was First Officer William Murdoch.

Second Officer Lightoller and Sunderland were two of the last men off the doomed ship. While trying to launch collapsible lifeboat “B” they were swamped by water rushing on the deck. Lightoller shouted, “Here she goes” and jumped over the port side. Sunderland followed into the cold Atlantic seas.

The two men were among the 29 lucky souls able to climb onto the overturned lifeboat B which had washed overboard. Sunderland saw the forward funnel come crashing down into the ocean, then the great ship broke in two “and the stern stood straight in the air” – two events that were only confirmed by the wreck’s discovery in 1985.

The survivors on the upside-down lifeboat stood for six hours balancing in waist-deep freezing water until they were rescued in the early morning daylight. Sunderland arrived penniless in New York City, made his way to Cleveland and then to Ontario. He served in the Canadian Army in the First World War and never fully recovered from the effects of being gassed.

After the war Sunderland settled in the Beach area near St. John’s Norway, first on Kingston Road, then on Duvernet Avenue and Kippendavie Avenue. He worked as a plumber and lived the rest of his life on Waverley Road backing onto Kew Gardens.

Over a century later we are still fascinated by the mystery of what happened in those last desperate hours when the Titanic sank. Countless books have described the tragic events.

Victor Francis Sunderland is not forgotten.  He survived and his son became a doctor, saving others in the circle of life. His memories live on in the epic film Titanic.

Back at St. John’s Norway Cemetery, stone angels watch over the departed and April showers bring flowers up through the cold ground. Spring is here at last!

Wow, and not too far away was the home of Madelline Mann, Audrey Ave., Scarborough. She was also a Titanic survivor, along with her mother and sister. She lived next door to my grandparents and I knew her when I was a kid in the 70s.

Cindy how can I get in touch with you about Madeline Mann.

Cindy, my two favourite articles to research were about other Titanic survivors who settled in the Beach. Madeleine also lived near me (on Kingswood Rd). Madeleine Mellinger (Mann) was only 13 at the time of the sinking and she saved her partially deaf mother’s life. Madeleine, Elizabeth and cabin stewardess Emma Bliss (Beech Ave.) are all depicted in the wonderful British film, A Night to Remember (1958), the most authentic of all the Titanic movies. Second Officer Lightoller gave his whistle to the Mellingers as thanks for warming him up in lifeboat 6. That whistle that helped saved the 30 men on the overturned collapsible lifeboat B is now in the National Maritime Museum in Greenwich, England (of time zones fame). Real history is often more exciting than anything fictional. Look for fascinating books on Titanic, the Canadian Connection at the library. Happy reading!

Bernie how can I get in touch with you about Madeline Mann.

Cassandra, just send an e-mail to our editor Anna Killen at and she will pass it on. I would be glad to hear from you about any information you have or I will try to help with what little I know about the family after the tragedy. Thanks for your interest.

He was survived by his SON…Dr. Kenneth Byron Sunderland. He has three granddaughters, and several grandchildren, some who are in the Toronto area still today.

Karla, my sincere apologies for saying “daughter” instead of son.. There is a lot of misinformation on-line and I didn’t help matters. That mistake is from “My Genealogy Home Page” (genealogy.com) which says wrongly “K.P. Sunderland (daughter of Victor Francis P. Sunderland …she married Davidson Black). The site also mentions Lyn Davidson Black. The Star obituary said Dr. K. B. Sunderland. Thanks for clearing this up. I wish I could have talked to you before writing the article, but I had no contact info. Any family insights would be much appreciated. Victor Sunderland had quite a story to tell. Do you know if he ever spoke much about the events on the Titanic? In those days people often did not want to talk much about such a tragedy. For them it wasn’t just a romantic movie, but a life and death struggle to survive. Thank you for letting us know and we will correct the article.

Apology accepted, no worries…all is good. Yes much of that is a mish mash. I hesitate to mention the names of my other two half sisters, in effort to protect their privacy. However, Kenneth had three daughters. I can tell you there is a lot of incorrect information on the various websites and publications. The account given about Victor’s time on the Titanic, and how he ended up in the water and then in/on lifeboat B…that is largely accurate. They used his newspaper interviews and I believe he gave court testimony/statements? as to what he witnessed. The movie Titanic, based quite a bit of the script on his witness accounts. That was factual. In the beginning, especially after the movie came out, we made attempts to make corrections on various websites. The problem I found early on is once you make known your contact information…whew…a lotta people want to know your business. For us, his family…this is quite personal. Now mostly we keep quiet to avoid exposure. Some day, one of us might well write his/our stories. It would also be a fascinating look at the early years of Toronto and that society. Yes, the survivors, especially the men, had enormous survivors guilt. I think that is why he joined the army so quickly, he was mustard gassed in WW1. He had nightmares till the end of his life. The thing that stands out most in my mind, is his sense of privacy. From what I know of him, he would not enjoy that his name is on the Titanic websites. He would be quite…

Ooops…ran outta room! He would be quite uncomfortable having his life looked at this way. It is this sense of wanting to protect my grandfather’s privacy that with all due respect to you, keeps me from sharing. Most of those stories are very personal insights, into a horrific tragedy, that marked him not only physically but emotionally all his life. It carried on and influenced to some degree, the following generations. I think you understand. Thank you for your interest in him though.

My father Dr. KENNETH Byron Sunderland was al so a saver of life he saved two young lads from drowning in swamp at the bottom of Cherry St, article in the paper in the 1940’s. He was the only child and I also am the only child. There is an a r tile I n b tg e Lethbridge Herald on the 100 th anniversary