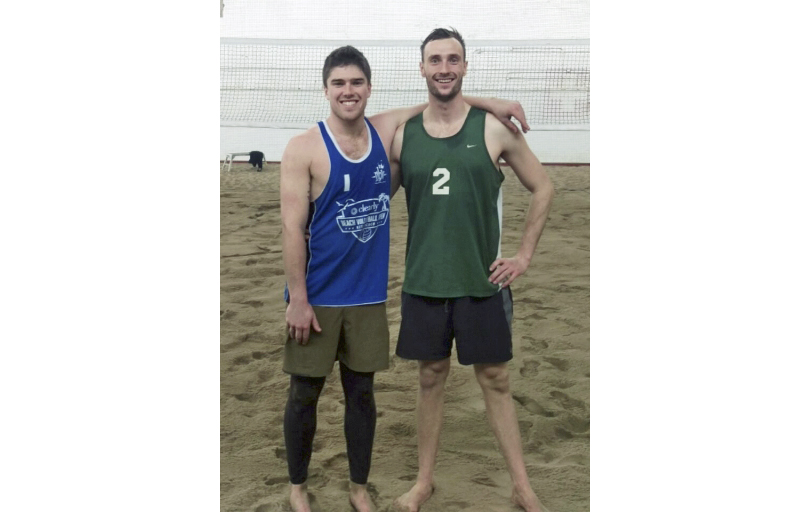 The last several weeks have been a whirlwind for Beach volleyball player Dallas Keith.

Not only has the 23-year-old been busy finishing his masters at the University of Guelph – he’s studying the role of sport for development, peace and gender equality – but a nearly game-day decision to partner up with a beach volleyball player from B.C. for Team Canada tryouts here in Toronto saw the new duo win the tournament and qualify to represent the country at the FISU Games in Estonia mid-July.

The FISU Games see the best university players in the world come together for a series of summer tournaments. The pair will also represent Canada at several other international tournaments leading up to the worlds.

“Two weeks ago I was messaging a friend of mine and he said this guy that I know, Devon Dunn, he’s looking for someone (to play with at the Team Canada tryout),” said Keith over the phone last week. “I messaged him … we talked to each other about it and figured out logistics, he was willing to fly out. I met him on Thursday, Volleyball Canada set up a training practice for us the Friday, and the tournament was the Saturday/Sunday.”

The two players, both of whom have international tournament experience, clicked immediately and went into the tournament with a winning mentality.

At practice, “our coach pulled us aside and said if you play with this mentality, with this bravado that you are going to win a tournament no matter what, mentality is more than half the battle (you’ll be successful).”

The boys took that advice to heart, and Keith said there were moments in the tournament when they were down 10-15 points “and we looked at each other and just brushed it off, like, ‘it’s fine.’”

Part of that trust and confidence in each other comes from how complementary the two are – Keith said he plays with his emotions on his sleeve and Dunn is a bit more reserved. After two world championships where Keith had the opportunity to learn from more experienced players, this is the first time he’s “been sort of at the helm.”

“It was almost like this instant connection with us,” said Keith. “We’d never played together before, we had one practice, and we ended up winning the tournament, which was great … we saw this instant success so we thought we might as well team up for the year together.”

“Fortunately for us we’re playing an FIVB event [the FIFA equivalent for volleyball] in May in Cincinnati, so we get to test the waters of our partnership internationally then, but I think one of the marquee events for us is definitely the FISU games just because it is so big and it was the catalyst that brought us together and made what we’re doing work,” he said.

The team is not without its challenges – namely the 3,400 kilometres between the two players. Dunn is finishing school in Vancouver – he wants to be a chiropractor – and Keith is here in Toronto. Because the two are not carded athletes, they have to pay nearly all of the tournament expenses themselves.

But Keith said the challenge will be worth it, particularly because this is the first time either of the players have felt a real athletic connection with another athlete. They want to see where they can go as a team and have their eyes on the 2020 Olympics in Japan.