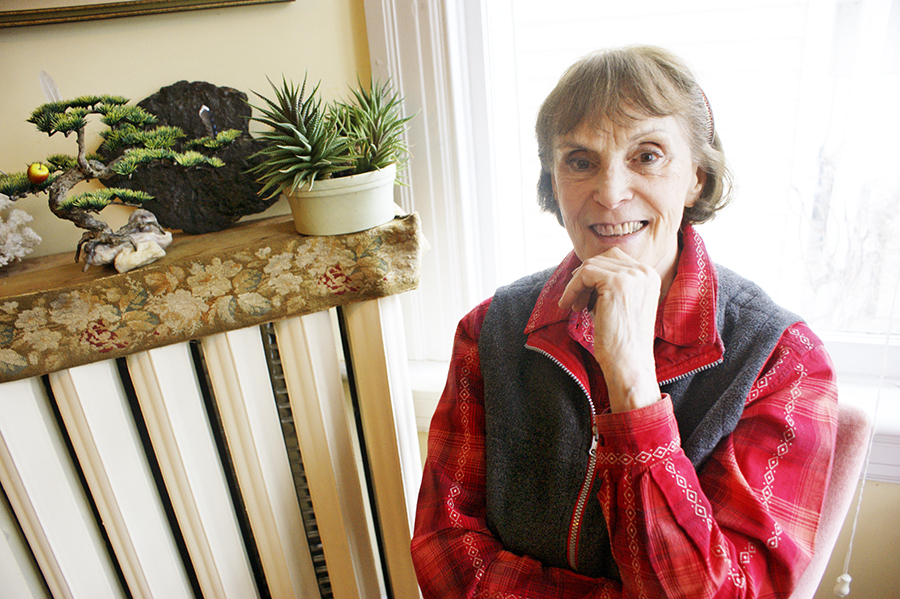 Riccarda Balogh survived a Type A aortic dissection, defying the expectations of doctors, and is getting ready to walk in another Beach Spring Sprint in April. PHOTO: Anna Killen

It’s the kind of story that calls to mind the word ‘miracle’.

An 83-year-old woman suffers a life-threatening tear of her aorta, and is told she can’t be operated on because of her age. Without the necessary emergency surgery, she should die within 24 hours. But instead, with the help of hospital staff, her body hangs on for four days, until an expert cardiologist reassesses the situation, realizing that her body is fighting – and clearly in better shape than her age suggests.

She survives the surgery and flies through rehab, returning home in four weeks instead of the usual six. Now, months later, she’s back playing the saxophone in not one, but three local bands, and is set to walk in the Beach Spring Sprint, a race she’s finished near the top of the pack of for decades.

Riccarda Balogh’s “little adventure” – as she calls it – is a testament to her extraordinary health, strong will, and calm demeanour, as well as the support of her neighbours, doctor, family, and friends.

True to her nature, she’s using the experience as a way to set and accomplish goals, and looks at it as something which underscores several of the life lessons she’s accumulated during her interesting – and challenging – life.

“I was in excellent health for my age and never expected anything like this to happen,” said Balogh. “It happened in the middle of the night. I just woke up with this awful feeling. And I’m not a morbid person, but I thought, ‘Oh my God, I’m dying.’ It just felt like something was blowing up my chest. No pain, nothing, just ‘What the heck was that?’ Really strange feeling.”

She waited for what felt like a few minutes before deciding to call 911. When the ambulance arrived, a number of her neighbours came outside to see if they could help and a neighbour from across the street got in the ambulance with her.

“It’s a remarkable neighbourhood. The neighbour who came, she’s really feisty, and I’m glad that she came along because she was really pushing for them to figure out what’s going on,” said Balogh. “And that really helped a tremendous amount because I was in no condition to fight. I wasn’t unconscious but I was in pretty bad shape by then.”

Eventually, the doctors figured out that it was a condition called ‘Type A aortic dissection,’ a tear in the main artery leading out of the heart and supplying the brain, internal organs and limbs with blood.

Type A means the tear is in the part of the aorta right next to the heart, and it’s the most dangerous kind. Many people with a Type A aortic dissection never make it to the hospital and among those who do, it is considered a surgical emergency, as there is an extremely high death rate associated with delay.

But while they figured out the problem, the solutions offered to Balogh were less than hopeful. She was told that the operation needed would 100 per cent result in death, so she could either insist on the surgery and die on the operating table, go into palliative care and be made as comfortable as possible, or see how long she could be maintained until her children arrived – the three had been notified and were making plans to travel to Toronto from across North America to be with their mother.

“Not only that but none of my organs were affected, which is almost unheard of,” she said, noting that 80 per cent of people with this condition die the first day.

“I think because I was in excellent health for my age, my body was still able to cope with it.”

An expert cardiologist came on duty, and seeing Balogh was “quite amazed.” With her consent, he arranged for the surgery.

Balogh said she remained calm throughout the whole ordeal at the hospital, and that helped her get through it.

“I had a reaction that I would never had anticipated – I was totally calm, totally accepting,” she said. “I thought, ‘Whatever happens, happens. I lived a lot of life, an interesting life, so this is the end, that’s all there is to it.’ I didn’t fight it, I didn’t get upset or hysterical.”

She’s always been one to be calm in emergencies, she said.

“I have a tendency to remain extremely calm in emergency situations,” she said. “I might fall apart after, but while the emergency is on, my mind just races back and forth with solutions to whatever the problem is.”

Her life has not been without its challenges, she notes.

People always say they’d like to know what the future holds, but I think that the greatest thing in life is that you don’t know what will happen

“People always say they’d like to know what the future holds, but I think that the greatest thing in life is that you don’t know what will happen,” she said. “Because once you’re in it, you just deal with it. If I would have known ahead of time the things I went through, I don’t know if I would have been able to face it. If you can’t swim you dog paddle, and you somehow get through it.”

She went through the Second World War in her native Hungary, surviving Communism before coming to Canada as a refugee in 1956, when she was 24. One of the few refugees who spoke English – it didn’t hurt that she was an attractive young woman – she became the face of the refugees, appearing on television and on the front page of the newspaper.

“I arrived literally with the one dress that the Red Cross gave me. Whatever they gave me, that’s all I had. They flew us over from an Austrian camp. We didn’t have any luggage, we were crammed in like sardines.

“I was just blown away by the kindness of people,” she said. “When the Hungarian refugees came we were treated amazing. I think at that time it was a novelty.”

She lived in Sarnia with her then husband for several years, giving birth to her three children, before leaving her husband (she said she left with the car, her kids, the dog called Fluffy and a guinea pig) to raise her kids as a single working mother.

“All three of my children turned out well. I’m very proud of them,” she said, smiling. “I do take credit for it, I had something to do with it.”

She worked as a teacher full-time, moving to the Beach 30 years ago to work at Williamson Road, and put herself through university at the same time.

Her older life saw her learning to play the saxophone at the age of 60. “I thrive on a challenge,” she said. “I love the improvising [that comes with playing jazz].”

She’s kept her mind active, too. One example: on the stoop in front of Balogh’s Beach home sits a completed Rubik’s Cube, with a neat handwritten note beside it marking “Free” – she’d completed it, and was offering up the challenge to someone else.

She said during her recovery these past few months, she’s noticed people pass her on the sidewalk, something she’s never experienced before.

The experience also reminded her of the kindness of people, and that it’s important to celebrate the good in the world, and try not to dwell on the things that don’t matter.

She said that while she has been pushing herself to recover quickly, she’s aware of her limitations and knows she needs to be patient in her recovery.

“I have to be patient. For people considerably younger than me it takes a year to get back to normal,” she said. “I am patient, my basic temperament is patient but a year is a long time.

“I’m the kind of person who thinks, if you don’t challenge yourself, if you don’t set goals, you get lazy,” she said. “Once you’re my age and you don’t have a job where you have to push yourself, you have to artificially create goals and deadlines and get yourself out the door … But I know my limitations, I never push myself to a point.”

This includes her participation in the Spring Sprint this April.

“I probably will try to walk faster than I should, it will be hard not to,” she said. “But I’ll try to be reasonable and try to remind myself that just walking the distance is already like winning for me. Not getting a medal? Who cares? I’ve got a collection already.”

I play in a band with Ricci and she really is amazing. Her outlook and her physical ability is that of a much younger woman.