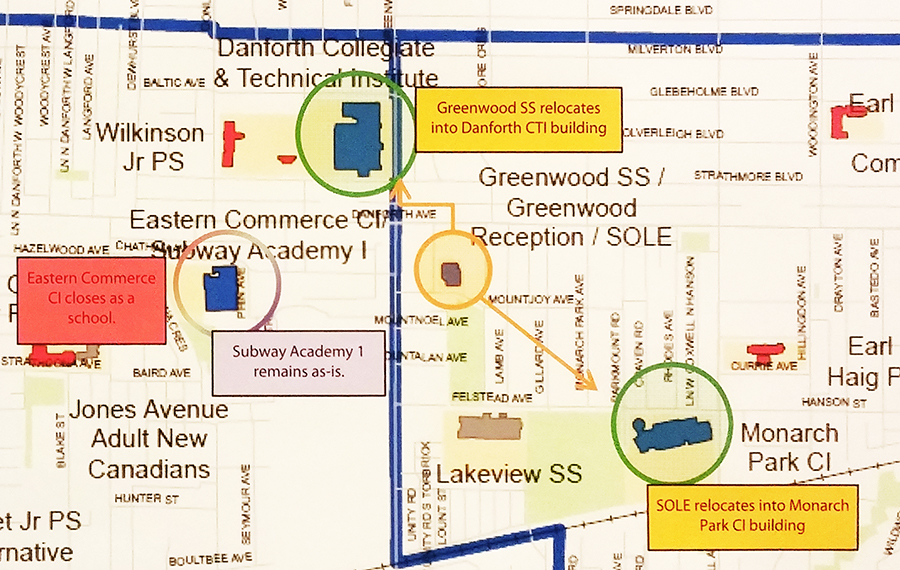 This map, on display at a March 11 Pupil Accommodation Review Committee meeting, illustrates the major changes the committee is recommending for East End high schools.

Facilitator Audrey Amo pointed out that of the dozen PARCs she has participated in, this may be the first where no major closures are proposed. Eastern Commerce is set to close, but currently has no students – the closure is a formality that will allow it to reopen as an aboriginal school.

The main changes proposed in the committee’s recommendations are splitting up Greenwood Secondary and the School Of Life Experience, currently sharing a building at 94 per cent of capacity.

Greenwood – a school where newcomers attend one to three semesters to build English skills before moving into other schools – would move into its own section at Danforth. SOLE, an alternative school with a flexible schedule, would likewise take over an area at Monarch Park Collegiate with a separate entrance.

The proposal was chosen from a dozen initial ideas, said Amo, nine of which were investigated in detail. The final choice – an emotional and difficult one, by many accounts – was made with an anonymous ballot by voting members of the 41-member PARC only the night before.

“It was easy in the first four meetings,” Amo said. “The hardest part is to come to the conclusions, because status quo was not an option.”

Amo made clear to the crowd that the option presented at the meeting was not the final word, though she later admitted PARC recommendations are almost always later adopted. The committee’s recommendations will be looked at by board staff, who will then write their own report and present that to board trustees, who are expected to make a decision in June of this year.

“No matter what we come up with as a committee, that is only a recommendation, and it will be up to the board as to whether all, some, or none of the recommendations are implemented,” she said.