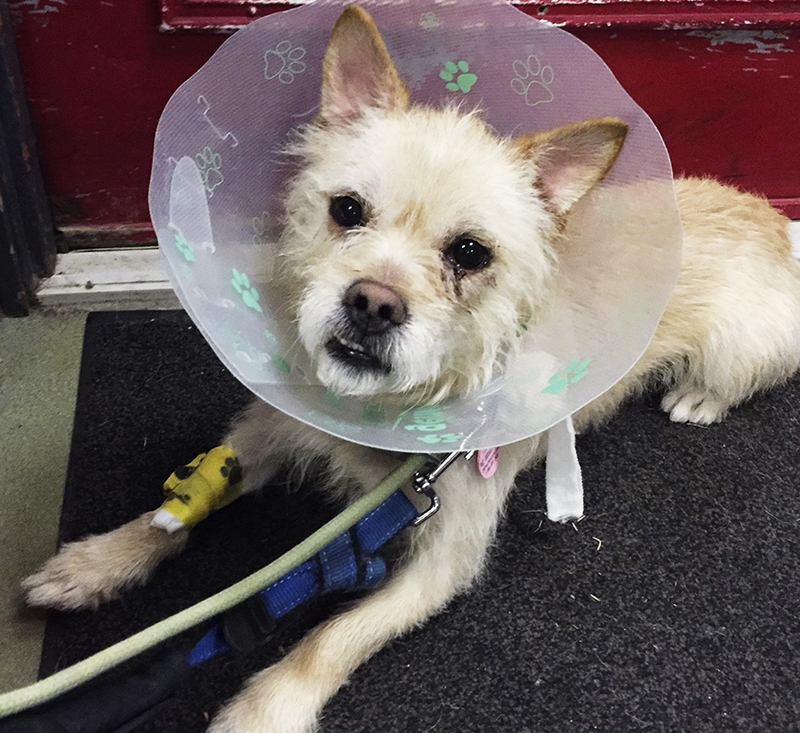 Chip, a terrier mix at Happy Tails Rescue, doesn’t mark the first time Marna Gale has fallen for a dog with a serious underbite.

This isn’t my first crush on a dog sporting an underbite. Back in my volunteer dog-walking days at the Toronto Humane Society, I fell hard for a boxer named Brady.

That bottom jaw jutted out worse than Private Bubba’s in Forrest Gump. It only added to his charm, but before I could make the conversion from beagles to boxers, Brady scored a dream home with the Rocky Mountains of British Columbia as the backdrop.

Then came Poochie, a Tibetan spaniel I once fostered – or at least that’s what he professed to be.

Poochie bore a striking resemblance to a baby gorilla in dire need of braces. He was hopelessly homely and irresistibly adorable at the same time, something infant primates are famous for pulling off. But Poochie also had personality, and that can go a long way. In Poochie’s case, it took him all the way to upstate New York when a love-struck couple from across the border couldn’t imagine life without Mr. Monkey Face and his pooch-a-licious personality.

Just when I thought there couldn’t be another, along comes Chip.

His rescuers at Happy Tails Rescue aren’t completely sure of his breed mix. There’s definitely some terrier in the blend, and that’s not just because of the kink in his curl.

Terriers know how to make an entrance, and 3-year-old Chip is no exception to that rule. He’d just had his neuter operation along with corrective surgery for Cherry Eye when I made his acquaintance in the waiting room at Beaches Animal Hospital. He gets to keep his endearing underbite, by the way, so no worries there.

Still, he’d been through the ringer. And yet the way he emerged from the back room, you’d think he was a gala event host rather than a recovering patient. Wire-haired and wired for sound was little Chip!

But Carol came up with the best description following Chip’s impromptu singing solo for everyone in the lobby. It was a packed house that night and a tough crowd considering the venue, but his Idol-worthy performance had the audience begging for more.

“He’s a circus in a fur coat!” exclaimed Carol, and the crowd cheered on. Terrier mixed with circus performer – that sums up Chip perfectly. Mystery solved.

But it wasn’t always spotlights and standing ovations for our little crowd pleaser. Not that long ago, the chips were definitely down for Chip. He’d been purchased from a pet store as a puppy. For a while he held the spotlight for his owner, but things changed when wedding plans arose. Chip didn’t seem to fit in with his owner’s future and so he was sent off to live with the grandparents. Sharing your life with a spirited young ringmaster like Chip is perfect for the able-bodied, but Chip’s “grand-daddy” struggles with degenerative bone disease.

If you’ve ever been tripped up by an enthusiastic pet while trying to make your way down a flight of stairs, you know the potential for a crash landing. Despite the huge entertainment factor, Chip was sadly too much of a health risk for his aging caregiver.

This brings us back to that spectacular solo performance at the vet clinic. He sure knows how to sing the blues and that’s probably because he’s been there, baby. But don’t get the wrong idea: There’s no chip on Chip’s shoulder! Chip is about as chipper as one can get since being scooped up by the aptly-named Happy Tails.

He may swirl around like a tornado but he doesn’t leave a trail of disaster in his wake, only smiles and applause. He has that effect on everyone. He loves to sing. He loves people. He loves dogs, especially the ones that like racing up and down the hallway before bedtime. He loves stuffed toys too … but if I’m going to be completely honest, he loves the stuffing more than the toys. Chalk that up to the tenacity of terriers and the boisterous splendour of youthful curiosity!

Just before bidding good night to my latest underbite crush, one of the veterinarians came out to provide post-op instructions for Chip’s Aunty Carol.

“Keep him quiet while he recovers,” instructed the vet.

Carol and I shared a glance that needed no explanation. Anyone who’s ever owned a circus in a fur coat knows, once it’s in town, there’s no stopping the greatest show on earth. Long live the Puppy!

Chip is a 3-year-old terrier mix and one-dog-circus performing nightly at Happy Tails Rescue … at least until he lands his own circus tent! If you’re looking for the perfect act to complete your show, step right up!