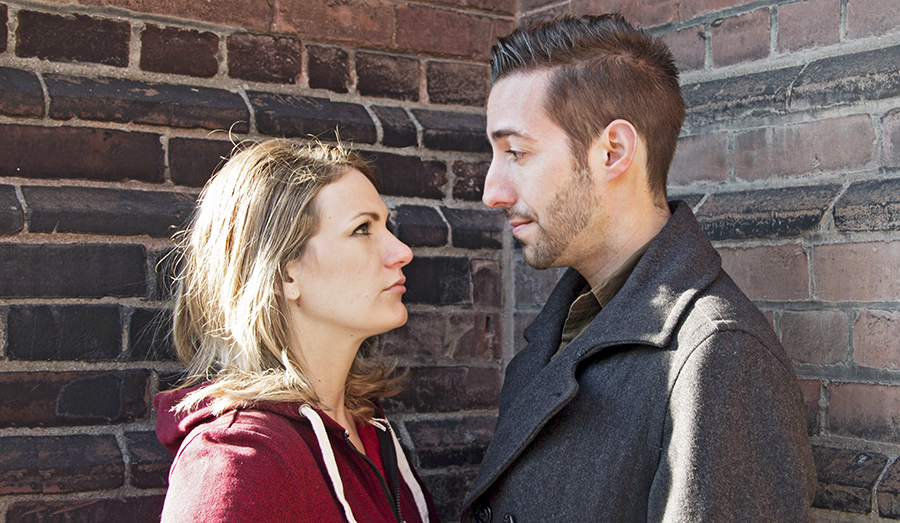 Magalie Rouillard-Bazinet, a director, actor and acrobat who moved to the Beach about a year ago, is producing and directing the play Sanctuary, running from March 9 to 12 at Théâtre Français de Toronto at Yonge and College Streets (the play is in English, for those who haven’t brushed up on their Français lately).

Sanctuary tells the story of June and Philip, played by Trish Rainone and Rufio Parker. June spends alone time every Saturday at a secret spot in a park, but arrives one morning to find a man drawing the surrounding scenery. Further investigation reveals Philip is not there just to sketch, but also to introduce himself to June.

The play, written by Emil Sher, deals with themes of depression, suicide and recovery. Rouillard-Bazinet believes the performing arts should do more than just entertain audiences: they should open minds and bring awareness to social, political and cultural issues. She writes that in Sanctuary “June and Philip’s paths fiercely collide and tell a touching and unexpected story.”

Rouillard-Bazinet will open the show with a stand-up performance.

The play tells the story of Newfoundland joining Canada as the 10th province on April Fool’s Day, 1949, through the eyes of the Mercer family, eight Newfoundlanders living in Toronto.

In true Newfoundland style, the laughs come as quickly as any emotion as the family members grapple with questions of identity, loyalty, and the notion of what ‘home’ means.

Special performances take place on Thursday, March 17, when the play will be followed by an audience talk-back session. The audience is invited to stick around after the show, when they will be able to take part in an informal question and answer session with the cast and crew.

After the performance on Friday, March 18, an adjudicator from the ACT-CO Festival will offer feedback to the performers. 1949 has been entered in the festival, which culminates with a gala presentation of the THEA awards. (“It’s like the Academy Awards of community theatre for Central Ontario” – take that how you will.)

Performances take place at Scarborough Village Community Theatre, 3600 Kingston Rd. at Markham Road. Tickets are $20 with a $3 discount for students and seniors.

The concert is a joint fundraiser between St. Aidan’s Beach Zipline community outreach program and the Balmy Beach Club’s accessibility plan. The choir will be joined by soloist and Balmy Beach Club member Linda Feijo.

Tickets are $30, and are available in advance from the Balmy Beach Club at the foot of Beech Avenue.

Jazzy Sundays continue at Morgans on the Danforth, 1282 Danforth Ave. at the Greenwood subway station.

The 501 East, featuring Carlos Lopes, Russ Boswell and Aidan Mason performs on Sunday, March 13. On March 20, Mandy Lagan and David Restivo take the stage. Performances run from 2 to 5 p.m. Admission is free, but reservations are recommended.

The chamber choir Cantorei Sine Nomine will perform Charpentier’s Messe Des Morts, a Baroque requiem, at St. Aidan’s Anglican Church on Tuesday, March 22. The concert is free and gets underway at 7:30 p.m. St. Aidan’s is at 70 Silver Birch Ave., at the corner of Queen Street East.

The choir was established by Stuart Beaudoin in 2004 to sing Bustehude’s cantatas Membra Jesu Nostri during Holy Week. The choir sings mostly Renaissance and Baroque works.  Members hail from across the GTA.

An ‘Easter Cantata pickup choir’ will perform at Hope United Church, 2550 Danforth Ave. at Main Street, on March 13. Starting at 7 p.m., the choir will sing Where Have They Taken My Lord?, written by Brian Stevens.

Stevens will play piano, accompanied by Bill MacLean on bass, through the 11 musical selections and readings. Admission is free.

The chorus and ensemble, comprised of students from the Washington, DC-based private school, are auditioned groups of promisingly-talented young musicians. The chorus has performed around the US and throughout Europe, while this concert will mark the jazz ensemble’s first international performance.

The concert gets underway at 4:30 p.m. on Saturday, March 19. There is no admission cost, but a freewill offering will be collected.