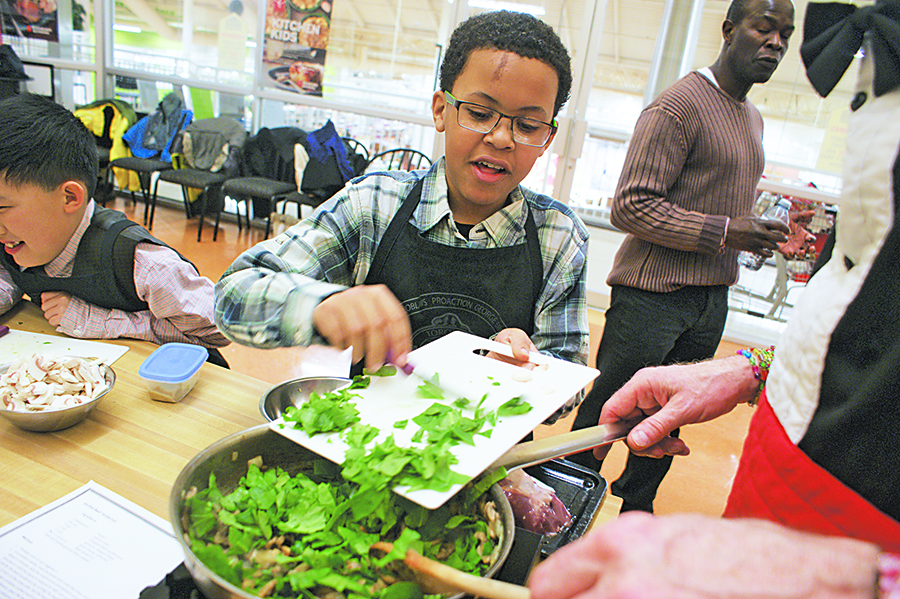 This isn’t a menu one would typically associate with 11-year-olds, but on a blustery night in February a group of aproned Grade 6 students from Roden Public School rolled up their sleeves and got to work in the kitchen, mastering all of these dishes and more as part of an ongoing cooking program that sees local cops and local schools cook and compete in the name of nutritious eats.

Since late last year, the PC Cooking School inside the Loblaws at Victoria Park and Gerrard has become a stage for “Chopped 55”.

Students are given a menu, ingredients – and some instruction – and have a set amount of time to pull off and present their dishes to waiting judges who in turn offer up critiques and praise.

“We’ve kind of progressed them,” said Pablo of the sessions that saw the difficulty level increase each week. “They’re very receptive to the feedback.”

On the evening Beach Metro News visited, the cooking confidence and skills developed by the students over the last four sessions was apparent – no one shied away from learning how to butterfly-cut pork tenderloin, or use twine to fasten the meat into a roll, once stuffed with a savoury goat cheese mixture.

Several students said they had been practising and cooking more at home since joining the class.

Presenting to the judges can be nerve-wracking, the students conceded, but aside from some slight suggestions (a soup was a bit too salty, the Beef Wellington a touch dry), the judges complimented the groups on their production and presentation, and particularly their teamwork – the real lesson underscoring the program.

“And just have fun, you know?”

He said the kids have fun with the program – as do the schools’ principals, who can be more competitive than the program participants.

The camaraderie among the students was noticeable as the groups sat down to share a meal, complete with stemmed wine glasses and coordinated napkins and dinnerware.

The six from Roden traded rapt conversation and inside-joke giggles like any close-knit crew.

The finale will take place in the coming weeks at George Brown College, with Chopped Canada’s chef John Higgins as the guest judge.

Anthony said there is a plan to make a recipe book featuring the dishes created in the Chopped 55 program, and sell it throughout the district as a fundraiser.