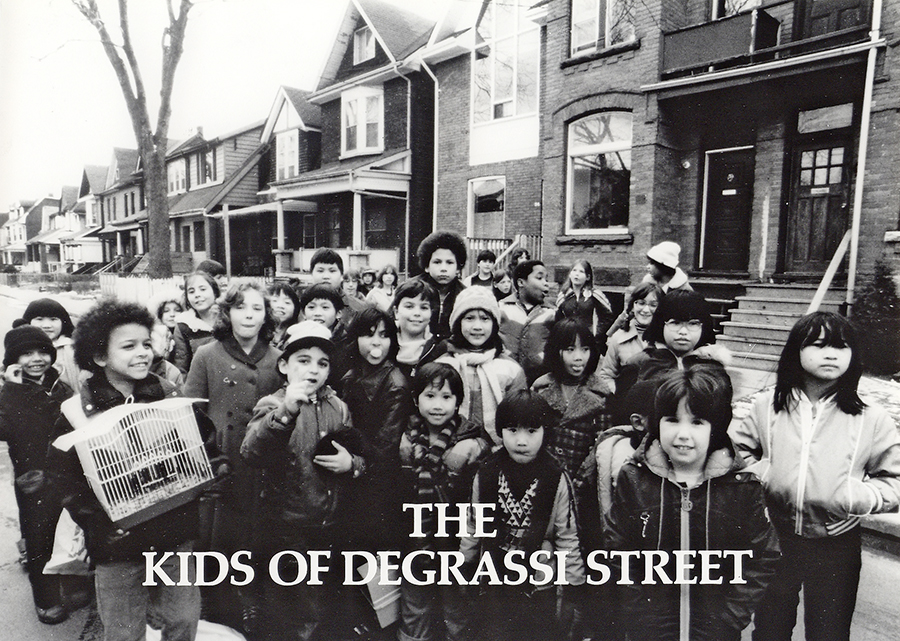 “Improving understanding and acceptance of individual differences makes it possible to raise a generation of much more compassionate people.”

– Linda Schuyler in U of T Magazine

De Grassi is a quiet little street we pass by as the Queen streetcar rumbles its way downtown, but to many teenagers around the world Degrassi is a beloved television series that holds a mirror up to their lives.

For local actors, Degrassi has been a stepping stone to success. Nina Dobrev, Drake, Shenae Grimes and Stephan James all got their start on the show. Look for James starring in the Jesse Owens biopic Race which just opened in theatres.

The Degrassi franchise started way back in 1979 when long-time Beach resident Linda Schuyler was inspired by her teaching career to co-create and produce The Kids of Degrassi Street. While teaching at Earl Grey Senior P.S., Schuyler decided there weren’t enough audio-visual materials for young people and gave it a try.

The original series followed the adventures of a diverse group of neighbourhood children growing up in East End Toronto in the 1980s. Early episodes featured the local grocery store and parks. The very first story, ‘Ida Makes a Movie,’ was actually filmed in the De Grassi Street home of fellow Earl Grey teacher Bruce Mackey. Three historical plaques in his namesake park now commemorate the show and Mackey, the “Grandfather of Degrassi.”

After almost 500 episodes, Degrassi is now on the Family Channel in Canada, available on Netflix in 190 countries worldwide, and dubbed into 17 languages. For tackling serious teen issues in an authentic way the series has won a mantle full of awards, including two International Emmys, countless Gemini and Canadian Screen Awards and a Peabody for a story line about a transgendered character.

Linda Schuyler is a trailblazer as a female producer in a male-dominated industry. She and her husband Stephen Stohn run Epitome Pictures from their studio in the Bermondsey area. For her contribution to the performing arts, Schuyler was appointed a member of the Order of Canada and the Order of Ontario.

Giving back to the community, Schuyler has quietly donated $1 million to the University of Toronto and helps Degrassi actors build schools in Third World countries through Free the Children.

She is proud of the ever-changing performers from the Degrassi “school” of acting.

Drake is now a music superstar, but Schuyler has said, “He’s not Drake to me, he’s Aubrey Graham. I hired Aubrey Graham for his first acting gig when he was 14 years old. I’m very fond of Aubrey.”

(Those of us who weren’t up in the middle of the night on Feb. 5 missed Drake and Rihanna shooting a video at the Real Jerk on Gerrard Street East at Carlaw.)

Scarborough-born and raised Stephan James is already a rising star to watch at 22 years young. Don’t be surprised to see him at the Oscars next year for his role in Race as the great track and field star Jesse Owens, who shattered Adolf Hitler’s myth of Aryan racial supremacy by winning four gold medals at the 1936 Olympic Games in Berlin.

James told the CBC, “Owens’ struggles and his triumph against adversity is so inspiring. The experience of playing this role has been such an honour.”

After playing civil rights leader John Lewis in Selma last year, James was invited to meet President Obama and tweeted, “They let a kid from Scarborough into the White House. Anything is possible.”

Scarborough’s Abel Tesfaye, better known as The Weeknd, wasn’t a part of Degrassi and never actually graduated from Birchmount C.I., but we can cheer for him at the Academy Awards (Feb. 28, 7 p.m.) where he is nominated for best song. You could say he “Earned It.”