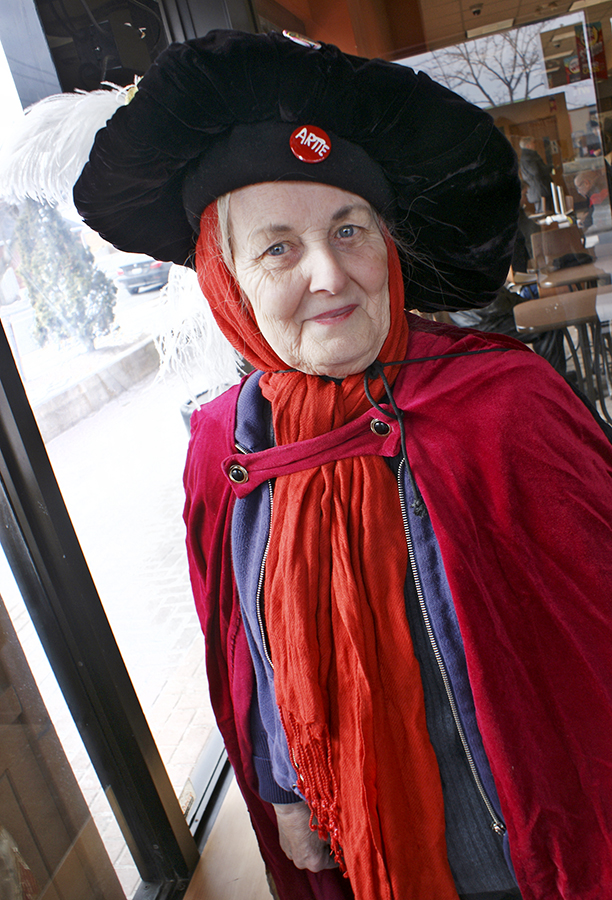 Dressed in a flowing superhero cape, her cascading silver hair pinned up under a dramatic hat, she’s almost always holding a tin of tiny artwork and treats to sell. Her vibrant presence stands out, even in a neighbourhood as eclectic as the East End.

Raised in the Beach, Campbell has watched the area shift, and buildings, shops and landmarks come and go. For the last 30 years she has made a point to document those places in pen and ink drawings, paintings, and books. She’s shown and sold her work across the city and gifted a fair bit of her large collection to friends and family members.

Her books have been featured in Beach shops – she used to work at a small bookstore, now gone, on Queen across from Kew Gardens –and she is a member of the Beach Guild of Fine Art.

By 9:30 a.m. on a cold February Friday morning, one coffee in, Campbell has added at least one new portrait to her sketchbook and struck up a conversation with several of her fellow patrons at a coffee shop at Gerrard and Victoria Park when this reporter takes a seat across from her.

“We’re running around the moon here,” she says, directly, after the conversation begins heading down several tangents. “Where should we start?”

Campbell isn’t one to beat around the bush – a retired community worker, she spent her career working in missions and shelters and getting to know those less fortunate, and has built up a thick skin because of it. Twice married, mother of four, grandmother of eight, and great-grandmother of four, she’s spent the majority of her life based in the Toronto area while also travelling across North America, at times on a Greyhound bus, seeking adventure and art.

Campbell said she’s been an artist all her life. Teachers encouraged her from a young age, but she said it probably wasn’t until she was 30 that she caught her groove. However, she began taking her practice seriously around 30 years ago, when she retired.

“You never retire, you retread, or you reinvent yourself, you know? That’s my motto,” she said. “I sketch, I draw, I always take a photo because you never know what you’re going to miss. But I do a lot of it on location.”

Her most recent project, “Artie” – the name she gives herself when she’s costumed – reworks the many facets of her life: her lifelong work in Toronto missions and shelters, her love of art and mentorship, and her gritty, get-things-done attitude. She’s selling small printed cards of her Beach-inspired artwork so that she can raise money to buy art supplies for homeless, marginally-housed, and low-income artists who show artistic promise.

“What I found was many of them are really artistic. Scratch the surface and you’ll find that they do something creative. Everybody’s got a talent,” she said, of the people she has met over the years.

But when you’re living in a shelter, art supplies aren’t a priority. Campbell decided to take it upon herself to source supplies for some of the people she knew would benefit from creating art.

“I had this vision for this Artie project and it came together in about a week,” she said. “I’d never thought about doing something like this before, it was really intriguing. I wanted to see how it would evolve.”

In November she began networking with some of the groups she knew, with the understanding that she didn’t want her program to have too much structure.

“My idea is to find a guy on the street who needs stuff, and get it,” she said. “That’s basically what I do. I’m more of a direct hands-on [kind of person].”

She’s met a few artists at art nights held at shelters and churches. She’ll often walk into a mission and simply ask, “Are there any artists in here?”

She buys paper, illustration board, brushes, watercolours, paint and pens, packages them together and delivers to the artist or someone who is in touch with them.

Some of the people she encounters running outreach programs are hesitant to encourage Campbell to have direct contact with the people she wants to help.

“They’re concerned for my safety,” she said.

“But I’ve worked with these guys for years, nobody’s ever bothered me, and I know most of them anyway. But I’ll follow protocol.”

While she’ll follow protocol, she’s careful not to let the bureaucracy bog down the momentum and “suck the fun out of it.”

She likes to focus on people who have talent, and from her experience as an artist, knows it only takes basic supplies and space to create.

“It doesn’t take much. [Some guys] could really make a living off it,” she said. “It’s the old adage, teach a guy to fish, feed him for a day …”

She’s helped one woman find pottery clay, costume jewelry and beading supplies for another. She met a man from Japan who is “a phenomenal glass blower” working as a chef at Tim Hortons, and is currently researching soapstone and carving tools for an Inuit man she encountered one day while walking in Cabbagetown.

“He’s in the national gallery,” she said. “His last exhibit is 2008 …when you look his stuff up online it’s really beautiful. I said to him, ‘It’s not my field of expertise, but I’ll try to get you soapstone.’”

Campbell pays out-of-pocket for a lot of the supplies, and tries to buy in bulk and find deals. But she enjoys the fundraising aspect, as well – the weekend days she spends dressed up selling her artwork.

“I’ll fundraise Friday and Saturday, then Sunday go to church and then go shopping.”

Ultimately, she’d like to connect with all of the people she’s provided supplies for and have a show.

“I go back all of the time,” she said. “They show me what they’ve done and then I meet somebody else.”

While her main focus right now is on artists, Campbell’s outreach goes beyond, a testament to her faith and life’s work.

She carries with her the schedules for the Out of the Cold program, so she can direct people she meets on the street to shelter and programming, and is happy to buy a coffee or a bagel for someone who looks hungry.

“I meet a lot of guys out on the street,” she said. “I talk to everybody.”

Had the great pleasure of meeting Beverly last night and I look forward to working with her to form an out of the cold program in Ajax, Ontario