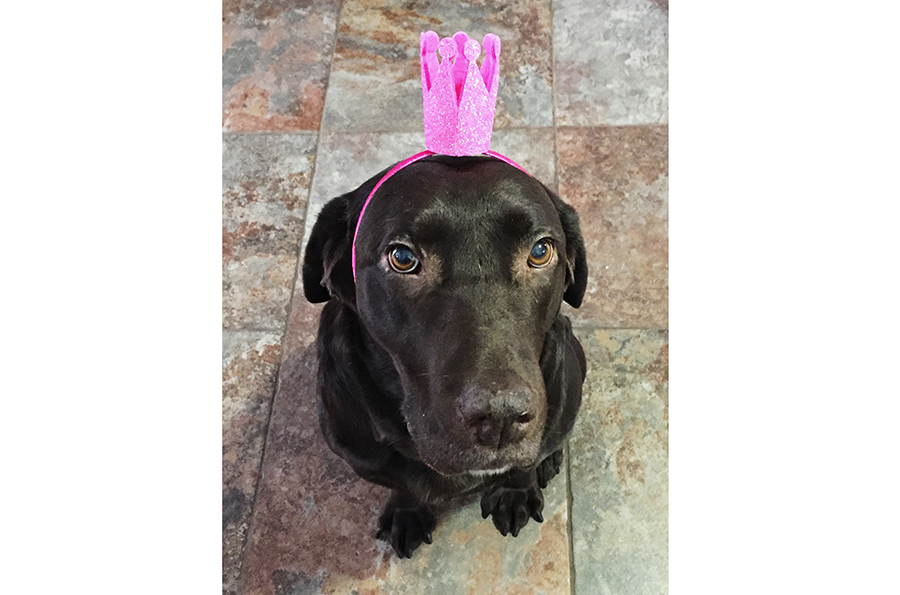 Gracie-Lou has managed to beat symptoms of canine megaesophagus in her new home. She also now goes by the more regal ‘Princess Grace.’

I knew Gracie-Lou was destined for greatness. What a difference a year makes!

Happy New Year, faithful readers. I’m sure you desperately want to get on with your New Year’s resolutions but let’s indulge in a little procrastination first! Grab a spot on the couch for our Year in Review.

In 2015, I featured a delightful array of kooky canines, a cat with an obsession for plastic bags, and an inspirational team of rats focused on home plate. My subjects, while so different, shared one common goal. They were all in search of a “happily ever after” to finish their “once upon a time.”

So … where are they now?

Exactly one year ago I introduced you to little Sir Elton (Big on Beagles), a badly injured, near-starving beagle that found shelter in an abandoned barn. It may be nearly as frigid a year later but Elton need not worry. He owns a stylish turtleneck sweater now, though truth is he prefers to cuddle on the couch on cold days.

Gracie-Lou (Sit with Me Rescue) came next in March, a goofy lab possessing a great outlook on life despite being plagued with a serious eating disorder. The condition known as canine megaesophagus required an upright position at mealtimes which meant a specially designed high-chair. Despite following the rules, she endured two emergency hospital stays for aspiration pneumonia. Fast forward a year and Gracie-Lou is Princess Grace. No longer symptomatic, she traded in her high-chair for … well, any seat in the house of the family who worships her completely. Nothing hard to swallow about that.

In April, a pint-sized poodle mix named Kobi (Happy Tails Rescue) lit up our paper with his commanding smile. He was the guy who survived against all odds after a viral infection invaded his tiny frame. Once he got better, it was just a matter of finding the right family to love him (and his extensive wardrobe) while making sure he takes his daily medication for high blood pressure. Mission accomplished! Not only did he score a festive Hanukkah sweater to add to his haute couture collection, he’s ruling over enough ‘crew members’ (stuffed animals) to fill his dog bed. Commander Kobi watches their every move from his vantage point on the family couch.

I promoted Slobberfest in May, showcasing some of the four-legged rescue dogs benefiting from the event. Daisy, a beagle in the care of Speaking of Dogs Rescue, copied Gracie-Lou by ‘marrying’ into royalty. These days, she goes by Daisy, Queen of Rollovers and Belly Rubs. Hail Daisy!

Another beneficiary was Lola of Boston Terrier Rescue Canada. Lola suffered from severe anxiety requiring medication to keep her calm. Nowadays, chasing rabbits in her backyard takes the edge off far better than pills. I’m sure being adored by her new family helps too.

Don’t forget Mikey and Mitzi, the smoochy poochies from Canadian Chihuahua Rescue and Transport who would have gladly run a kissing booth at Slobberfest. That’s okay, the mistletoe hanging in their new home at Christmas made up for the lost opportunity.

Big on Beagles Rescue represented too, with Mickey Malarkey. Mickey has become the world’s greatest thief. His caregivers are still looking for a pricey leg brace belonging to another dog at Sheba’s Haven, proudly stolen by Mickey the Moocher and hidden somewhere in the back forty. Paws crossed it surfaces come spring thaw.

Spring gave way to the boys of summer. Five resilient rats, named after Blue Jays players, had been abandoned behind a pet store and rescued by the Toronto Humane Society. All five were drafted into loving homes with three going to the same family! 2015 was a great year for the special species department as a whole. The staff celebrated 500 adoptions, almost twice as many as the year before. Accommodations have grown to include four amazing new turtle enclosures and custom-made digs for the hamsters. Currently there are many guinea pigs, budgies and rabbits looking for good homes.

My Franky came next, the beagle that carried a watermelon-sized tumour on her chest for two years. While that lump is long gone, she’s got others that may prove trouble down the road. We still thought we could find her an adopter but like your typical romantic movie, the love of her life had been right in front of her all along! I’m happily stuck with Franky Frankenstein, lumps and all.

Jolene, however, still longs for someone to take her home, especially if that someone has a bin full of plastic bags for her to curl up on. She doesn’t ask for much and she won’t steal your man just because she can … unless he’s the one with the plastic bags. But seriously, there’s nothing finicky about this feline. If you have plenty of love and a glorious bed of bags, get down to Beaches Animal Hospital and adopt our favourite bag lady! In the meantime, she’s their favourite candy-striper.

My last featured pet of 2015 was a beagle in a bucket named Faith. I had high hopes for Faith like we all tend to have near the start of a New Year. We hope for health and prosperity, but every year has its share of bad weather. Our Faith has inoperable cancer. Time is short, but she’s still wagging that tail. And while it may seem other featured pets have had better outcomes, she doesn’t see it that way. If she could talk, she’d reassure us even more by quoting the immortal David Bowie – “I don’t know where I’m going from here, but I promise it won’t be boring.”