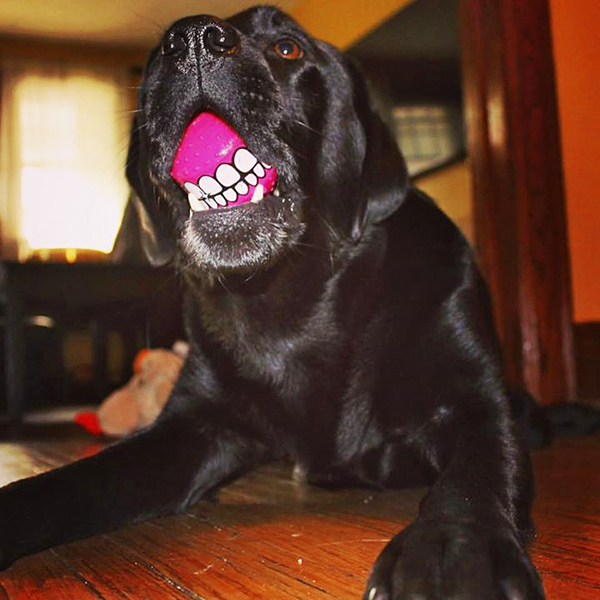 Dawg Grillz is a dog toy developed in the heart of the Beach by a couple who want to “put a smile on the face of both you and your pup.”

The brightly-coloured dog toys feature cartoon-like teeth that make it appear dogs are smiling, and according to product designer Scott Luscombe, the idea is taking off already.

“It’s kind of turning into a pretty big little brand,” he said, pointing out the company has distribution in Canada, Europe, and now the US.

A freelance product designer who’s done work for companies such as Coca Cola and Nescafe, Luscombe brought his partner Marina Vander Heyden into the fold, and with the help of official product tester Roam, a black lab, Dawg Grillz was born.

“With no connections and a small start-up budget we were able to make something pretty cool,” said Luscombe.

All the toys are made from medical-grade rubber, and have been tested to ensure they’re non-toxic. They float, bounce, squeak, and some even glow in the dark.

“We take a lot of pride in our products and our manufacturing,” he said.

“A dog could technically eat it, and as long as he didn’t choke on it, he wouldn’t come to any harm,” he added, though of course only supervised play is recommended.

A special dog tag has also just been launched to benefit the fight against breed-specific legislation, the proper term for Ontario’s decade-old pit bull ban. Currently funds will go to organizations in California and Australia, though Luscombe said he hopes to fund the Toronto Humane Society’s opposition to the legislation as well.

Betsabe Bustillos and her husband Daniel Ospina have had a great run so far, several months after opening the Flying Elephant Bakery on Queen Street East at Neville Park Boulevard.

Bustillos trained as a pastry chef and baker in her native Venezuela, while her husband, originally from Colombia, takes care of customer service. The bakery offers South American pastries and breads, French pastry, special occasion cakes, and a coffee shop with half a dozen tables.

“We want to bring a little bit of our culture here, and perhaps the people will like it,” she said.

Having lived near the beach for so long in her homeland, Bustillos knew the Beach was the perfect spot for the bakery. Flying Elephant opened last fall, and “since then it’s been amazing,” she said. “The community has been very supportive.”

Bustillos said the support shown by locals has been well beyond her expectations for the first months of a new business. The coffee shop has regulars already, and she said the neighbours have embraced Flying Elephant.

The bakery and coffee shop are open from 9 a.m. to 7 p.m. from Tuesday to Saturday, and from 10 a.m. to 6 p.m. on Sunday. To view a gallery of some of the impressive cakes Bustillos has created, or for more information on the bakery, see theflyingelephantbakery.com.

Tae kwon do pioneer Jong Soo Park has opened a third branch of his school on East Danforth.

Park was born in Korea, and has achieved a ninth dan black belt, training under the founder of the martial art. He became the instructor of the Korean army’s Tiger Division and at a police training centre at age 14.

Park then earned the national championship in his early twenties, and was sent on a ‘goodwill mission’ to a number of countries to demonstrate Tae Kwon Do to civil and military authorities. After coaching stints in Germany and the Netherlands, he came to Canada in 1968, where he started his own school.

In Korean, ‘tae’ means to kick or flying of the feet, ‘kwon’ means to punch, and ‘do’ means way or method. Park believes this method of self-defence is unrivalled, but learning must always include mental training, to avoid misuse.

Jong Park Tae Kwon Do is at 2073 Danforth Ave., a couple doors west of Woodbine. Find the school’s class schedule and contact information at jongpark.com

Andrews said the app is targeted at beginning songwriters with some basic music knowledge.

“I think it’s best suited for people who can play maybe a chord or two on their guitar or on their piano, and they want to start writing their own music, but they don’t really know anything about music theory,” he said.

The musician, who formerly led a band called The Marks, sent the app out to a number of musician and music instructor friends and acquaintances to make sure his approach worked.

“We’ve beta-tested it with a lot of people, we’ve made a lot of little changes to make it better and better, and now we’re just getting it out there,” said Andrews.

Waay is $4.99 US, available through Apple’s App Store. To read more about the company and its offerings see tenkettles.com.

uKloo, a game that gets kids active while helping their efforts to learn to read, has been selected to enhance a non-profit nation-wide literacy organization in the US. Dorreen Dotto, the Beacher who originally created the game to help her own two sons get more excited about reading, said Kids Need to Read will distribute the Early Reader Treasure Hunt Game to 72 classrooms in 20 schools in low-income areas throughout the US, reaching as many as 2,000 children. The organization was founded by Denise Gary, children’s author PJ Haarsma, and Canadian-born television actor Nathan Fillion.

Dotto said the physical aspect of the game is one of the things that set it apart from other games.

“It’s different in the fact that children actually move when they’re learning to read as opposed to sitting still,” she said.

“Nothing can beat a child running around the house looking for cards, and finding a surprise at the end, and saying, ‘oh wow, I can read this card.’”

While the partnership with KNTR is not the first literacy effort Dotto has worked with, it is one of the largest. Regardless of the organizations involved, the common goal is the same, she said.

“It’s a tool that is different than a book,” said Dotto. “We’re all working towards the same cause, to help children learn how to read.”

In the game, children must read a clue to discover where to search for the next clue, and so on. Parents are very involved in the game, hiding clues and deciding on a special prize when the child solves the final clue.

uKloo is available in an early reader edition, a riddle edition, and as a free app for iPhone and iPad. See ukloo.com for more on the games.