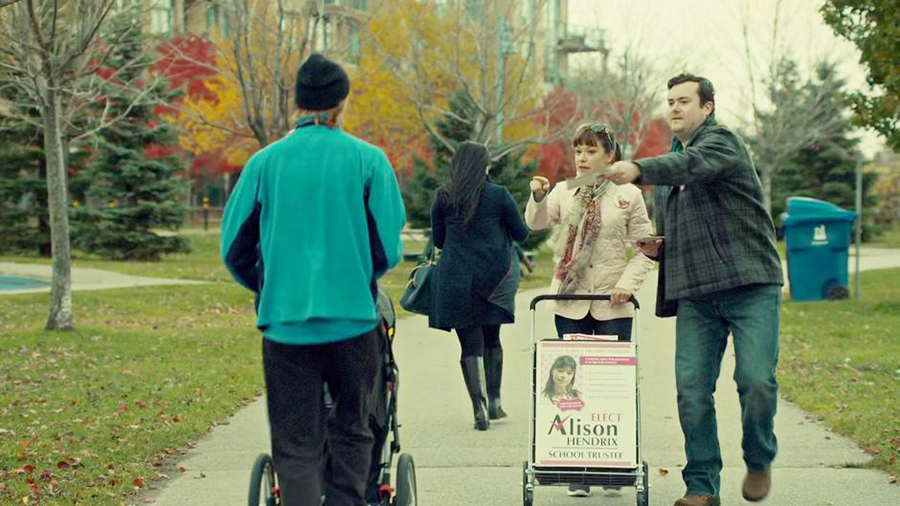 Allison (Tatiana Maslany) and Donnie (Kristian Bruun) are up to no good at Woodbine Beach Park in ‘Orphan Black.’

All have French-Canadian ancestors.

British comic actor Gervais kicked off the 2016 red carpet season by hosting the Golden Globes on Sunday night. Whether or not you enjoy his irreverent brand of humour, Gervais certainly likes Canada, Toronto and the Beach.

Last May Gervais posted a photo of the Leuty Lifeguard Station and tweeted: “Exploring the beaches of Lake Ontario. What a beautiful place to live.”

After enjoying a day at the Beach, Gervais and his partner, Jane Fallon, couldn’t find a taxi at Queen Street East and Woodbine Avenue. A local fan, Kara Stahl, offered the couple a lift to their downtown hotel and they were very appreciative of “Canadian hospitality at its best.”

Emmy and Golden Globe winner Gervais was in Toronto to direct and star in Special Correspondents (coming soon to Netflix) with Eric Bana, Vera Farmiga and Leslieville’s Ari Cohen.

Gervais once looked into his Canadian roots, but was afraid he would find “something awful.”

He claims he considered getting a Canadian passport which “might be useful in a war. You’re like a big Switzerland.”

Gervais was also here in Toronto last January prepping for the film and despite the freezing weather he tweeted, “Absolutely loving Toronto. Being half-Canadian I guess it’s in my genes. And so are my shrivelled …” Oh, wait, this is a family paper.

The Gervais family has deep roots in New France and Canada dating back to the 17th century. Ricky’s father, Lawrence, was born near Chatham in Pain Court, Ontario, one of the earliest French-speaking communities in Ontario. While serving overseas in the Second World War, Lawrence met Eva House during a blackout. They married in 1944 and stayed in England.

While Gervais’ digs at Hollywood are entertaining, the big show is still the Academy Awards on Feb. 28. When Oscar nominations are announced on Thursday, Jan. 14, two made-in-Toronto movies are among the front-runners for Best Picture: Spotlight and Room. Spotlight is set in Boston, but mostly filmed in Toronto – though you would never know it. Our city is a cinematic chameleon, able to disguise itself as other places.

Our favourite Toronto resident Rachel McAdams has a chance at gold for her role as an investigative journalist digging deeply into a church scandal. Along with Jacob Tremblay of Room she is nominated for a Screen Actors Guild Award on Jan. 30.

TIFF People’s Choice Winner Room is an Oscar hopeful with likely nominations for Best Picture, Best Actress (Brie Larson) and Best Adapted Screenplay (London, Ontario’s Emma Donoghue). Jacob Tremblay is a long shot, but the 9-year-old from Vancouver could become the youngest performer ever to win a competitive Oscar statuette.

On the television side, Fargo (filmed in Alberta) had another terrific season. Watch for young actor Atticus Mitchell (from the Upper Beach) in the Emmy and Golden Globe-winning first season.

Susan Sarandon is nominated for a SAG award for the Toronto-lensed The Secret Life of Marilyn Monroe.

Last, but far from least, Orphan Black cleaned up at the Canadian Screen Awards last year with 10 trophies and may repeat in 2016 (March 13). Tatiana Maslany was nominated for an Emmy and SAG in 2015 and a Golden Globe in 2014. The clones return for season 4 in the spring. I can hardly wait. Let’s hope for a short winter!