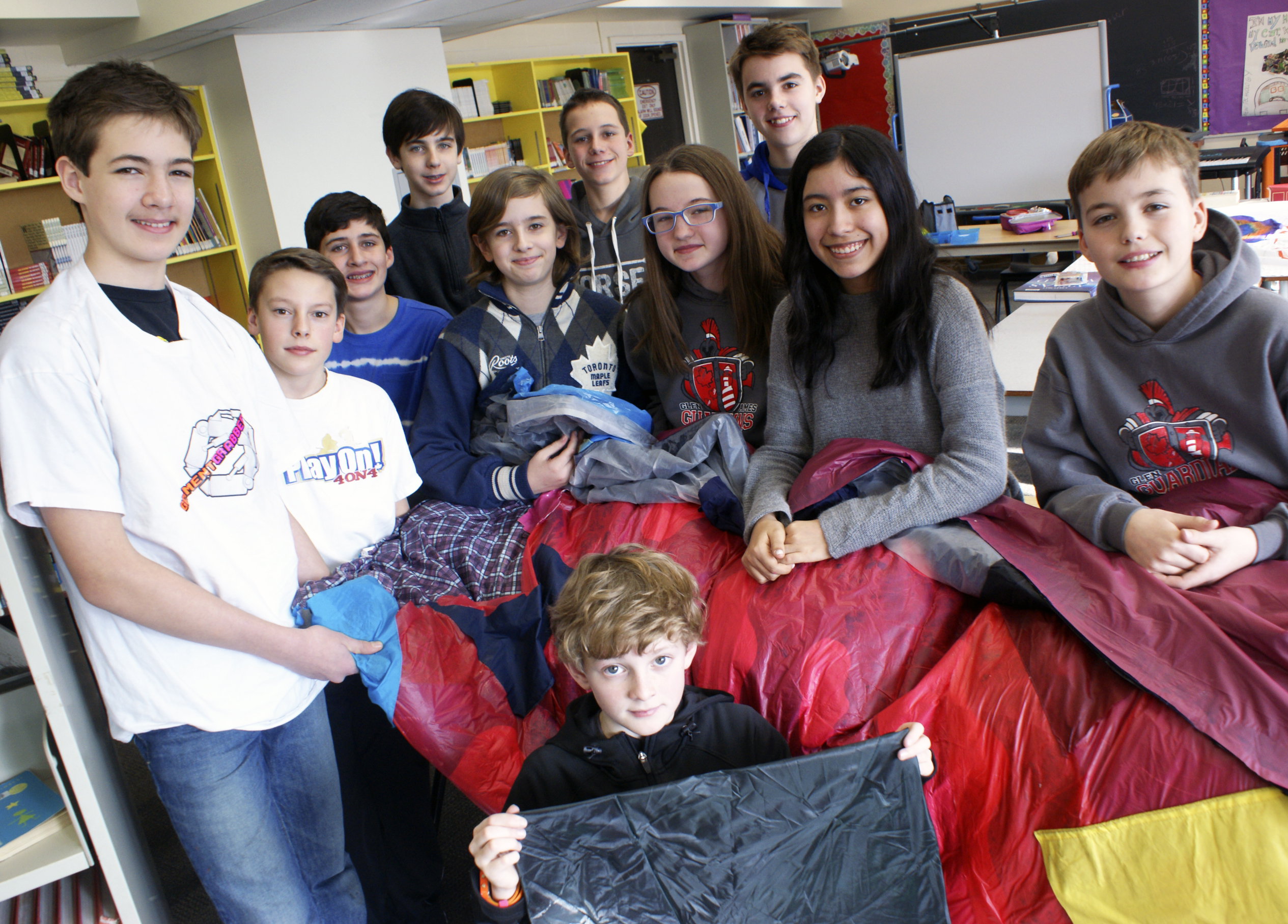 The Glen Ames Garment Grabbers show off the all-in-one sleeping bag they created for the First Lego League robotics tournament. The close-knit team, which designed the waterproof and fireproof sleeping bag for a local homeless shelter, is heading to provincial championships this weekend, hoping to qualify for internationals. Photo: Anna Killen

When you think of trash, what comes to mind? Plastic bottles and food waste? Garbage islands floating around the ocean? Discarded batteries and electronics?

For this year’s Glen Ames robotics team, called the Garment Grabbers, what came to mind was clothing.

“Usually you don’t think of clothing being wasted,” said programmer Evan Barlow. “Your parents donate them to secondhand stores. But actually, when secondhand stores don’t use them, they go to the landfills.”

It’s a global problem that doesn’t get as much attention as it should, the Grade 7’s and 8’s explain, speaking at their headquarters in the middle school’s library over lunch on Jan. 6.

“The problem has gotten a bit bigger than it would have been in the sixties because now we’re buying more clothes every month – all those sales and stuff,” said researcher Sofia Carrillo. “More and more clothes are harder to reuse because not everyone wants to buy them from thrift stores, so they send them to other countries and it ends up in their landfills.”

But, she says, this increase in textile waste also provides an opportunity to use that waste for good – which is precisely what the Garment Grabbers set out to do when developing their project and presentation for the First Lego League competition.

The Garment Grabbers, coached by librarian and computer teacher Luke Martin as well as a number of other mentors and coaches, are one of four East End school robotics teams heading to the First Lego League provincials on Jan. 16.

It’s a two-part competition. Teams of 10 compete in a series of robotics tests (teams build and program Lego robots to perform various tasks – the Glen Ames team had the top scoring robot at qualifiers), and also showcase a project presenting an innovative solution to a problem (this year’s problem: trash).

The team took the global problem of textile waste and came up with a local solution, designing and building several all-in-one sleeping bags – pillow, blanket, sleeping mat – out of used clothing, towels, and blankets.

They have since donated the sleeping bags to the homeless clients of the Beach Out of the Cold program.

Their first of several sleeping bag prototypes, which they call 1.0, was 68 pounds – one 12-year-old team member had the pleasure of lugging it around for 24 hours as a part of the testing – so the team knew they needed to make version 2.0 lighter.

“We decided we should use blankets instead of towels because they were bigger and it was easier to stitch them together,” said lead researcher and project manager Mikhail Szugalew. “They were also lighter.

“We also wanted to make it waterproof because if they’re using it outside and it gets wet, it could become really heavy and hard to transport, so we got waterproof clothing and glued it on the outside.”

The team also considered feedback they received from Out of the Cold.

“We put pockets in the sleeping bag so they can store their goods, it’s waterproof on the inside so it’s easier to clean, it will soon be fireproof,” said Barlow. Version 2.0 – down to 18 pounds – even has a dog mat, for those who have dogs, and for version 3.0 the team wants to install solar panels for users to charge their phones.

“A lot of homeless people have phones, they’re just not charged, so it’s much harder for them to get jobs because there is no way of contacting them again,” said research and presentation manager Audrey Carlyle.

The team is looking forward to showing their latest version at provincials this weekend – and checking out what they know will be tough competition.

At the (qualifying) tournament, we were one of the few teams that had an actual project – most of the other teams had ideas, great ideas, but they didn’t have a physical version of their project. It’s been great having it to test it and being able to see how it works.”