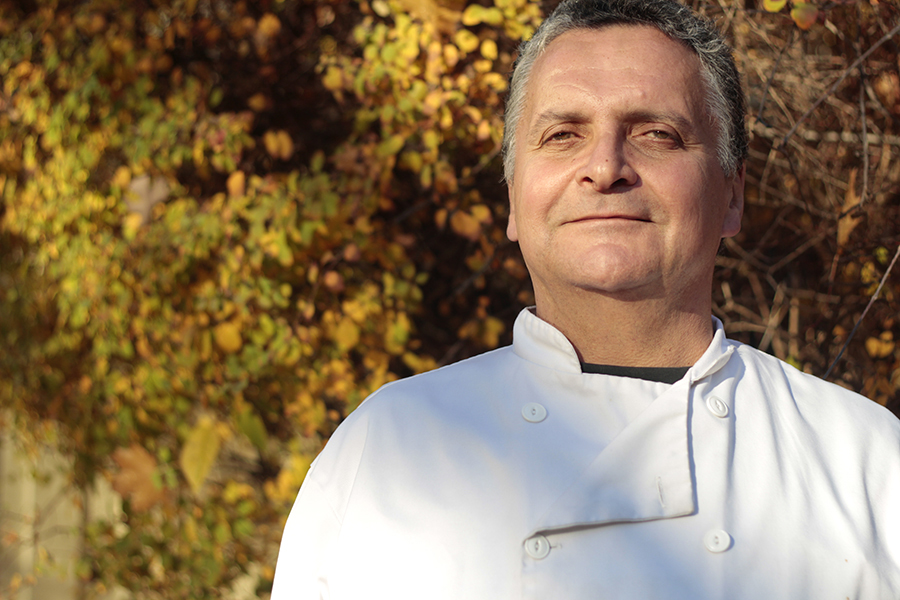 Chef Gordon Brown has come a long way since a life of addiction and homelessness. He’s now a regular speaker for The United Way and a popular cooking instructor at the Beaches Recreation Centre.
PHOTO: Andrew Hudson

“Hi Chef Gordon!” comes the sing-song voice of a kid walking up Lee Avenue, half a block away.

“Looking good!” calls a woman not a minute later, laughing with a friend as they push by with strollers.

Today, Nov. 17, is Gordon Brown’s 60th birthday, and there is no question – he is looking good, feeling good, and doing good.

The good Brown does is the easiest thing to account for.

It’s fall, so that means he is busy giving dozens of speeches for United Way Toronto, which he has volunteered to do for every year for a decade.

Mostly, he speaks to “corporate types,” the United Way supporters he likes to rib a little at venues like the National Club, or a TD bank executives’ breakfast.

But Brown speaks to everyone who might benefit from hearing his story, from civil servants to drug court judges, high school kids to Premier Kathleen Wynne.

That story even has a working title: Bread Man Walking.

Before he became “Chef Gordon” to everyone at Beaches Rec, Brown was the man who used to show up with fresh bread for the staff, made with his own hands that morning at St. John’s Bakery.

And it was at St. John’s Bakery where Brown remade his life.

A social enterprise run by St. John the Compassionate, the bakery gives recovering drug addicts and people with other mental health issues a chance to work.

“The premise was right,” says Brown.

When he was first hired by the bakery in 2004, Brown was trying to find his way out from 25 years of cocaine, crack, and homelessness.

It didn’t work the first time. Like his 500-day dry spell in the late 1990s, one that saw Brown start cooking school only to relapse, he faltered, missed shifts, and got fired.

“If you decide to clean up your act, give us a call,” they told him.

Brown phoned St. John’s every month in the summer of 2005. He was in a relapse prevention program, living at Transition House, and spending days at the Toronto Reference Library with a medical dictionary and Cocaine and the Brain.

In September, St. John’s took his call and rehired him.

“I ran with the second chance.”

Brown worked as a sales rep and an early-morning baker, with a shift that started at 5:15 a.m.

As an addict, 5 a.m. had meant something completely different to Brown – just getting to bed maybe, or time to start waiting for the liquor store to open.

Now, he had to wake up, and people were depending on him.

“It gave me a trade,” said Brown, who rose to become lead baker.

“Slowly but surely, I was capable of doing more hours, and the welfare cheque got smaller and smaller until one day I could phone them and say, ‘Please close my file.’”

Besides sunrise starts, Brown was waking up in a new neighbourhood, the Beach. It was far from the Annex-area hang outs where everyone he knew did cocaine on the weekends, and the bars where everybody knew his name.

That October, he moved into a home owned by a childhood friend, and it happened to be steps away from the Beaches Rec Centre.

“I went 300 times that first year,” said Brown. “That was building a foundation.”

“I don’t know how often he comes anymore…” he started to tease, but Brown cut him off.

“Never mind now!” said Brown, laughing. “Can’t we just deal with the past?”

For three years, Domagala and other staff at Beaches Rec got to know Brown as he came to the gym or ran the boardwalk, brought in bread from St. John’s, volunteered for the United Way, and started catering big meetings for Beaches Rec staff.

In 2009, Domagala had a once-a-week, after-school cooking class that needed an instructor, and he thought Brown would be a perfect fit.

Brown was 53, and he had never worked with kids in his life. But he gave it a try, and he loved it.

“I happen to have a personality that’s usually described as childlike,” he explained, smiling. “Not childish!”

By any measure, Brown has done an incredible job – from a single class, the Rec Centre’s after-school cooking program has grown to several classes with 56 kids a week, not to mention a weeks-long summer camp and workshops for youth and seniors.

“It’s a testament to what recreation, to what social service can do,” said Domagala.

“I think that Gord’s story has huge value,” he said.

While it’s not something he shares readily with everyone, Brown has all his cooking classes join a number of local Beach families in making regular dishes for the homeless who stay at the Good Shepherd Mission – a shelter where he himself used to sleep.

That is a gesture kids can easily understand, said Domagala, adding that teenagers could benefit from hearing more of Brown’s story.

“Everybody’s got a history,” he said. “It’s important for young kids and people in general to understand the evolution of a person’s character.”

After a decade of speaking for the United Way, including a record 92 speeches one year, Brown said he has no intention of slowing down.

“The people who made donations to the United Way, not knowing who I am – they helped support me when I was unable to support myself,” he said.

“That’s the bottom line for why I give back.”