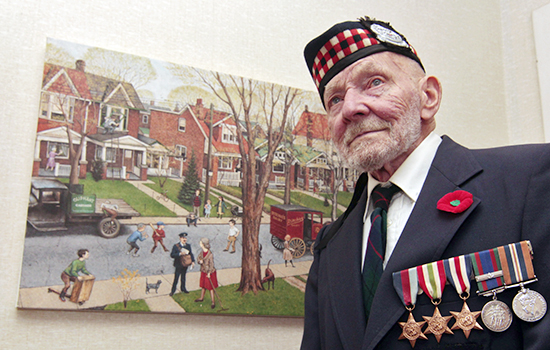 Bob Fraser survived the Second World War to return to his lifelong home on Silver Birch Avenue. Known to neighbours for his paintings, an alley south of Kingston Road will be named in his honour at 1 p.m. on Saturday, Nov. 7.
PHOTO: Andrew Hudson

Bob Fraser has many remembrance days, some welcome, some not.

At 91, Fraser is best known for his paintings – bright scenes of life in the Beach and along the boardwalk.

But in the spring of 1944, Fraser was far from the Beach and his lifelong home on Silver Birch Avenue.

He was a 20-year-old rifleman picking his way over the hills and ravines of occupied Italy.

“Nice country, if they don’t shoot at you,” he says.

Often under fire and rarely indoors, Fraser marched with the 48th Highlanders and 1st Canadian Division to Rome, then ringed by the Adolf Hitler Line.

Travelling in small groups of maybe a half-dozen, they had little radio contact through the day.

At night, if the enemy was close, they slept by digging a hole in the ground and crawling in.

Fraser later sketched a few scenes from the campaign.

One shows the German paratrooper who snuck up on his platoon and disarmed three men before he suddenly turned and fired a machine gun at Fraser and two others.

One comrade was wounded. Another shot the paratrooper dead.

But Fraser has other perennial memories of the war that he never put to paper.

Marching up a road in Italy, Fraser saw something strange up on the five-foot embankment.

“I looked to my left and you could see German helmets in a row, like they were at the edge of a trench, ready to put on if they needed them.”

Fraser was bringing up the rear. No one else had seen the helmets, not even his section leader, who was over six feet tall.

But the memory bugs him anyway.

“They could have suddenly become occupied, those helmets, when they heard us coming up.”

Fraser had no quick way to warn anyone.

“I was a little squirt at the end of the line.”

After surviving snipers, gun turrets and mortar fire, and a full-scale battle at the Hitler Line, Fraser got a week off in Rome. It was his first leave in over a year.

From there, Fraser was reassigned to Belgium and then to Holland, where the cities were under a truce so food could get to the starving civilians.

On May 8, 1945 – Victory in Europe Day – Fraser rode into Apeldoorn, in the Netherlands, and saw the streets lined with people waving in joy.

“We got on trucks and went right through – the people went crazy,” he said, laughing.

Before enlisting in the army, Fraser had left Malvern Collegiate in Grade 10 to work in a law office and then as a Globe and Mail copy boy.

It was a kids’ job, he said, mostly delivering wire stories as they came tapping in letter-by-letter from the teletype machines connected to places like Montreal, Ottawa or New York.

Fraser heard those machines ring for Pearl Harbour, and the day the casualty list of the 907 Canadians killed at Dieppe came in.

“The night they produced the casualty list on the teletype, there were hundreds and hundreds of names coming in – just the ones from around Toronto,” he said.

Fraser admired the reporters he met at the Globe, including sports writer Jim Coleman and a 17-year-old June Callwood, who would quickly climb the ladder to become one of Canada’s top social justice reporters.

“She was the same age as me,” he said, smiling. “And she was quite an attractive lady.”

It was against the rules, but sometimes when the teletypes went quiet, Fraser and other copy boys would use them to message each other – maybe the only teens who sent text messages in 1942.

Much as he enjoyed his time at the Globe, when Fraser returned to Toronto in 1945, he didn’t want to be a reporter.

“I felt I needed to paint,” he said, noting that he had always enjoyed drawing as a kid.

Fraser enrolled at the Ontario College of Art, where he studied commercial art from 1946 to 1950.

Afterwards, he freelanced catalogue illustrations, even did some gag cartoons for magazines.

Today, the walls of the Silver Birch house display just a few dozen of his 150 paintings – portraits and neighbourhood scenes.

Fraser captured a summer ballgame at Kew Gardens, the players lit by floodlights, the bleachers full, lamps glowing in the windows along nearby Waverley Road.

He painted kids tobogganing down the Glen Stewart ravine – something he did with friends in a bobsleigh in the 1930s – and showed tow trucks pulling illegally parked cars off a bustling Queen Street in the 1990s.

There is a portrait of his aunt at 100, and a friend’s daughter at 18 months. Another portrait shows his friend Phil Williams in his master corporal’s uniform, while other paintings show the 48th Highlanders’ band in full regalia at Kew.

Four years ago, a heart attack slowed Fraser’s painting, but he is back at it now.

Beside the easel of his upstairs studio is a sunset volleyball game on Balmy Beach and a smiling portrait of his mother that he started years ago, but which always missed something – a chocolate cake in her hands that now just needs some icing.

While he doesn’t go out of his way to market his art, he has sold many paintings and prints, and done several commissions, including a childhood view of Silver Birch Avenue.

“I don’t try and sell them,” said Fraser. “I’m just painting for myself.”

On Nov. 7, though, Fraser’s paintings will have an audience. He is planning to invite his neighbours over after a special event, the naming of Bob Fraser Lane.

Tucked between Kingston Road and the houses on Silver Birch and Willow Avenue, the little lane is a popular spot for potlucks and barbecues – scenes, maybe, for a future painting.

“I was honoured by it,” said Fraser, whose name was chosen by neighbourhood vote.

A painter whose nine decades on Silver Birch were broken only by the war, it is hard to imagine anyone who better represents the street.

But Fraser sees another affinity.

He’s the Norman Rockwell of the beach, I remember him as a child growing up in the beach…

How wonderful to read your story. I loved growing up in the beach, on Edgewood Ave. Loved the boardwalk, the sandy beach, Woodbine Race Track old friends. A lifetime ago.
A great gift you have Bob, thanks for sharing your story. Wish you well and more paintings to come.
Perhaps someday soon, I will drive in to the city and find your lane.

I am so happy to have found this, my best regard to Bob Fraser. I knew him from working at Victoria Art Gallery, on Queen Street East. He’s a wonderful artist, man with a wonderful heart, I could go wrong on and on…happy to see his life work, still being shared with you the people from the Toronto beaches… And the rest of us. Lucie Moreau.

I had the pleasure of meeting Robert before he had his heart attack, a true Gentleman, my daughter had connected with him through Apple and quickly became his friend, he so reminded her of her most beloved grandfather. I had the pleasure of viewing his quaint little studio and see his work in progress. I have one of his paintings hanging in my kitchen, he had painted a picture of my daughter for her ,as she live in Toronto she asked me to keep it safe for her. As I live in Alberta I get to look at her daily and have very fond memories of our lunch at Roberts home. Best wishes to Robert and Congrats

Would you know where I could find more of Bob Fraser’s wonderful paintings of the Beach, please?