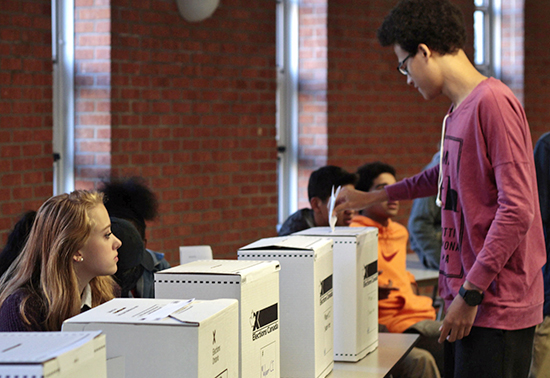 Adam Nortmann, a Grade 10 student at Malvern Collegiate, casts a ballot in Student Vote on Oct. 16. A mock election jioned by 850,000 Canadian students who are not yet voting age, Student Vote featured real Elections Canada booth and ballot boxes, as well as copies of ballot for Beaches-East York. To see results from the latest Student Vote, visit www.studentvote.ca. PHOTO: Andrew Hudson

Even people who voted early this federal election are way behind Nick Szczepanksi.

The Grade 11 student voted for a Beaches-East York candidate at Malvern Collegiate on Oct. 16, and he’s not even 18.

It was actually Szczepanksi’s second time voting in Student Vote, a parallel election held at Malvern and another 6,000 elementary and high schools across Canada.

“I feel that you’ve got to express your right to vote,” said Szczepanksi, who joined 150 Malvern students in helping run the real Elections Canada voting booths and ballots set up in the school cafeteria.

That sort of attitude is what Student Vote aims to promote.

Created by the non-partisan charity CIVIX and funded by Elections Canada, it involves more than a mock election.

In the lead-up to voting day, students in Malvern’s civics and politics classes also learned to match their beliefs with Canada’s political parties, and discussed the issues at play in this campaign.

The local Conservative, Liberal, NDP and Green Party candidates all visited the school to make their pitch and answer students’ questions.

Question one for all of them was about rising student debt.

Online surveillance was another big concern, as were the Syrian refugee crisis, the high number of missing or murdered aboriginal women in Canada, and the question of legal marijuana.

“I think it’s just highlighted for me that the students, given the chance, are actually really curious about a lot of these political issues,” said Evan Grant, who helped students organize the vote with fellow teachers Lia Paterakis and Lisa-Angela Turcotte.

“It made me think that the parties really should be developing a more extensive youth platform.”

While the 850,000 ballots cast in the latest Student Vote didn’t “count,” they did get counted, and can be compared with the real thing.

Had Student Vote alone decided the shape of Canada’s current parliament, it would also have a Liberal majority government and Conservative opposition, but with a Green Party caucus of four MPs.

Likewise, the Student Vote for the 2011 federal election would have elected a Conservative minority government and an NDP opposition, plus a Green Party caucus of five MPs.

But what actually happened to the youth vote in 2011 is part of a pattern Student Vote hopes to reverse.

Only 38 per cent of voters age 18 to 24 cast a ballot four years ago.  Older Canadians outvoted them by leaps and bounds.

The most active voters in 2011 were age 65 to 74. Over three-quarters cast a ballot — a turnout on par with the overall turnout Canadian elections used to draw before 1993, when turnouts slid into the 60 per cent range and below.

While more time is needed to crunch the numbers, comparing vote gains and losses among the major parties suggests a lot of that increase came from new voters.

That’s a trend that Lia Paterakis, who now teaches Malvern’s Grade 12 politics and law class, would like to continue.

But Paterakis can also appreciate some reasons why the youth vote may have declined. She was 22 the first time she voted, and it wasn’t her first opportunity.

“It was the first time I felt informed enough,” she said.

At the time, most of what Paterakis knew about politics came from Grade 10 Civics — a half-credit course that every Ontario student takes at 14 or 15.

“There’s a disconnect,” she said, and not only because that class was several years behind her by the time she could vote.

For one thing, politicians and news media tend to use language geared to insiders, she said.

For another, paper-ballot elections and old-style media coverage seem out of step.

That, at least, is changing, said Paterakis. Campaign news now has a shot of getting onto people’s social media feeds, and websites such as Canada I Side With can quickly show a first-time voter how his or her beliefs fit with the political parties’.

Evan Grant said despite what people may think, the trouble is not that Canadian youth are apathetic — recent studies suggest they are actually more politically engaged than previous generations when it comes to non-voting activities such as volunteering, joining marches or signing petitions.

By giving students an early trial-run through a real election, Grant hopes they can better connect the personal and the political.

“Maybe we’ll see something different this year,” she said.