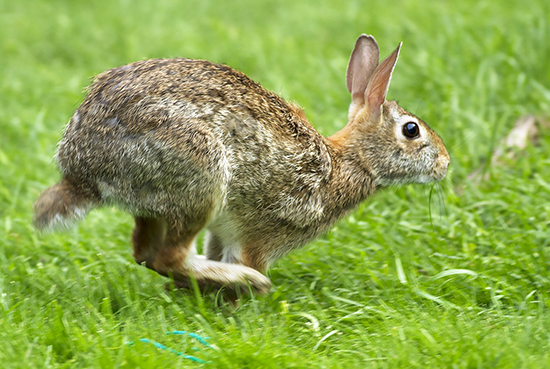 It’s that time of year when the rabbits start to reproduce like, well, rabbits, as I’m sure many of you have noticed. Though they might be bad for our vegetable gardens, it’s hard to stay mad at fuzzy wittle bunnies.

Recently Erle and I have enjoyed watching a pair of rabbits in our front yard. Most nights, around dusk, they show up under the feeder to clean up whatever the birds have missed. The pair were doing this hilarious dance routine that my son (with a pet rabbit of his own) assures me is called ‘binkies.’

Apparently when rabbits are excited or happy, they do these very fast sprint-turn-jump-twist-turn-jump-sprint movements.

This can be done while the rabbit stands in one place, or while running (which is really weird looking), and is sometimes justifiably called the “happy bunny dance.”

If you ever see this for yourself, it’s important to remember that the rabbit is actually very happy at that moment and not sick or possessed! Check my YouTube channel to see a video of rabbits doing binkies.

Eight years ago we had a very different rabbit encounter. The day before my daughter’s baby shower we found four baby rabbits, with their eyes still closed, out in the open in my back yard. We were quickly able to locate their nearby nest, but weren’t sure what we were supposed to do.

We ended up doing what everyone should do: call for advice from the Toronto Wildlife Centre (torontowildlifecentre.com). They told us to put them back in the nest and add some yarn pieces (if the yarn is gone or moved from the nest it means the mom was coming back to feed them.)

The next day, during the shower, we not only found the four babies back out of the nest, but they were joined by several more of their siblings. We called again for advice and, after a conversation about the condition of the babies, we were asked to bring them to a rescue centre.

So what’s the best way to tell a wild cottontail from a domesticated rabbit? Well, if the rabbit is white or black, uses a litter box, and has a ridiculous name like ‘Commander Bun Bun’ (my son’s rabbit …) it’s probably domestic. Assuming you see a rabbit outside, however, a wild rabbit would likely be coloured brown and grey (agouti), though the colour of their fur often changes with the season. Wild rabbits have long, slender legs and their face will seem longer and more pointed than those of their domestic relatives. They are extremely high-stress – probably because they are very close to the bottom of the food chain – and will never be tame or friendly like a domestic bunny. It is illegal to keep cottontails in captivity so if you find one, even a baby, and a shelter can’t take it, you must let it go.

Some interesting facts I’ve learned about rabbits over the years:

Wild rabbits have four long fingers with very sharp nails, which can do significant damage to a predator. Never hold an adult rabbit facing you, as their kick is strong enough to break your ribs.

Parents only feed their babies twice a day, at dawn and dusk, and their eyes give them nearly 360˚ panoramic vision that helps them see predators from all directions.

Rabbits can jump up to a metre high (and have been found hiding in trees), and three metres in distance.

Lastly, thanks to their impressive reproductive skills, all over the world rabbits are recognized as symbols of fertility and rebirth, which is why they are associated with spring and Easter – although I’m still not sure where the chocolate eggs came from.

Chocolate eggs come from chocolate bunnies, of course!
Nice article, Ann – I never see rabbits in the west end, but it may have to do with our huge dog population.

What an interesting article.

On a moonlit night this past winter I saw some shapes under the bird feeder…dark shapes against the white moonlit snow. A pair of rabbits. They’ve been regular visitors and now we see little ones as well. My peas have been decimated as well as several varieties of flowers…but take heart they don’t like everything. A couple of years ago I live trapped 9 semi feral cats and wild life has rebounded.

I just love to see nature in my yard from birds, wildlife to little chippies and rabbits. Never get tired. Thank you

Erle was the first to see the babies Today. So exciting. They are already about 30 days old. Mom and dad did a great job. Thank you Carole and Deb.

Fantastic article Ann, as a foster of cottontails, it is good to let people know that their wild mom knows best. They are real adorable little animals to watch in the wild but very difficult to rehabilitate. I too have seen many “binkies” and it is always a joy to see. Keep up the good work, spreading the love and terrific advice..

Thank you Susan. Bless you for being a foster mom to cotton tails.
Thank you for your comments

Excellent. Thanks for the read Ann