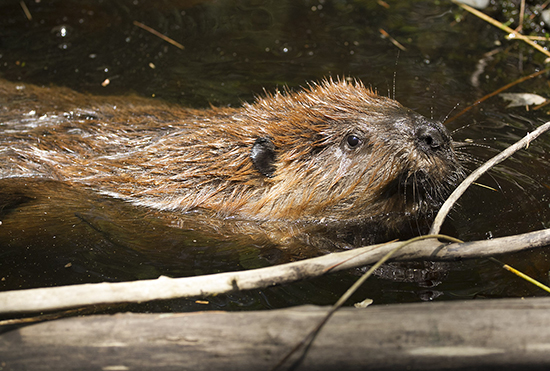 The beaver uses trees for food (bark and buds) as well as for shelter, building its dam from the tree’s trunk and branches. PHOTO: Ann Brokelman

Every day, every walk, and every drive seems to bring a new adventure for me. Am I lucky? Maybe, but I wonder if maybe by learning about the wonderful natural world around me I’ve found a way to create my own luck.

Just the other day I was taking a walk by the water and noticed a fallen tree. I’m sure you’ve seen at least a couple fallen trees in your time, but did you ever take the time to notice why the tree was more horizontal than usual? On this particular day I decided to take a closer look and was rewarded for my curiosity. Not only did this tree fall because its base was chewed, but several others had been taken down the same way. Just like that I had my daily adventure: time to find a beaver dam!

As I approached the water I was startled – though I should have known it could be coming – by the quick ‘crack-smack’ of a beaver hitting the water with his tail. (They do this as a warning to their family members that danger could be in the area.)

I felt bad for disturbing them, but until then I had no idea the beaver was only a few metres away from me. I stood still, hoping to make up for my intrusion, but he knew exactly where I was and slapped his tail again to say he was still unhappy with my presence. I took the hint and left him to continue about his business.

A couple of cool facts about our beaver: The beaver has been on our 5-cent coin, which was designed by Canadian artist G.E. Kruger Gray, almost exclusively since 1937.

Beavers are one of the largest rodents in the world and eat leaves, bark, twigs, roots and aquatic plants. When beavers fell a tree they waste nothing, systematically eating the bark and buds before cutting up branches and sections of the trunk to carry for use in their dams or lodges.

They are excellent swimmers, can hold their breath for about 15 minutes, and only enter their dams from an underwater entrance. While beaver dams can create flooding and a lot of other frustrations for nearby human residents, they are important to the environment because they create unique ecosystems for hundreds of other Canadian species.

Amazingly, by the mid-19th century the Canadian beaver was almost wiped out by hunters and trappers. Beaver hats were a pinnacle of European fashion, a fact which almost cost us one of our beloved Canadian symbols.

The beaver attained official status as an emblem of Canada when an “act to provide for the recognition of the beaver (castor canadensis) as a symbol of the sovereignty of Canada” received royal assent on March 24, 1975.

Take some time to enjoy this remarkable creature, which can be found all over the province and country. They are unique, beautiful, and very Canadian.

Bluffers Park is being turned into a disaster zone. People have been setting fire to benches, and garbage, including cans, has been thrown into the lake. Ceremonial flags and food appears to have been dumped by local businesses. Call 311 to report trash, or the local 41 Division Police at 416-808-4100 if you see a crime being committed. That’s a great article, Ann – thanks! Now I know what the slapping sound is telling us — I’ve heard it any number of times, but the beaver keeps out of sight.

Well-written! I live in the west end of Toronto and I’m researching a book about the beaver. Can you provide me with the location of what I presume is a beaver dam and pond? I’d like to go and take a look. Until your blog, I had been unaware of any beaver in the city.

Hello Rod yes the beaver dam is in Tommy Thompson park at the spit. There was also a pair at bluffers park but sadly the female was killed. The dam at bluffers is massive. Easy to find a walk to the east end and around to the lighthouse. Please pm me abrokelman@gmail.com for other information