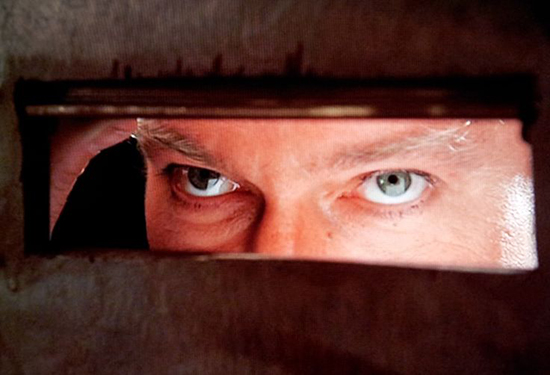 Those eyes! That voice! Can you guess who played the nasty villain (photo above) in the 1978 thriller, The Silent Partner, with scenes at Kew Beach?

Hints: He is the oldest actor ever to win an Academy Award. His great-grandfather was a Canadian Prime Minister. His father lived in the Beach for more than 30 years and wrote a history of St. Aidan’s Church.

The renowned stage and screen actor Christopher Plummer is best known for his role as Captain von Trapp in The Sound of Music, which celebrated its 50th anniversary this year. At 84 he shows no signs of slowing down, starring in Atom Egoyan’s new film Remember (Fall 2015). The talented Plummer has won two Tony Awards, two Emmy Awards, and finally an Oscar in 2012 for the film Beginners, the story of a father and son relationship. Ironically, Plummer barely knew his father in real life.

Wrong! It was his mother who worked at McGill and was also secretary/treasurer of the Canadian Handicrafts Guild. John Plummer never lived in Montreal!

John Plummer is barely mentioned in Christopher’s entertaining memoir In Spite of Myself (2008). The actor writes fondly about his mother’s wealthy and cultured Quebec family. His great-grandfather was Sir John Abbott, the first Canadian-born Prime Minister. Christopher’s parents divorced shortly after his birth and the son did not meet his father until he was 17.

I set out to answer the question: Who was John Plummer?

John Orme Plummer (1894-1977) spent most of his life in our fair city, including three decades in the Beach. He came from a family of mining pioneers and business executives. His uncle was the prominent patent attorney F.B. Fetherstonhaugh, who designed and owned the very first “horseless carriage” in Toronto, an all-electric car, in the 1890s. His father, Frank Plummer, ran a shipping company.

John attended Upper Canada College from 1906 until 1913, then Trinity College at U of T. His schooling was interrupted by the outbreak of the First World War. He served more than five years as a lieutenant on the front lines. During the terrible Battle of the Somme in 1916 he was briefly invalided out of France because of trench fever caused by lice bites. “Lousy” doesn’t begin to describe the miserable conditions in the trenches.

One of the volunteer nurses in France was Isabella Mary Abbott (1890-1955). Whether or not nurse and lieutenant actually met is the stuff of a Hemingway novel (A Farewell to Arms).

After the Great War, Isabella returned to a life of privilege near Montreal and exhibited her landscape paintings alongside the Group of Seven. John studied law and arts at Trinity College in Dublin, Ireland.

His parents and two younger sisters moved to London, England for business, but John was “deeply rooted in Toronto” where he returned to sell stocks and securities. It was the “Roaring Twenties” – what could go wrong?

John and Isabella married at Quebec City in February 1929. Alas, the course of true love never did run smooth.

My guess is there was a shipboard romance that hit the rocks on land. Isabella was a strong-willed, independent woman of 38. With a baby on the way, she went from mansions and yachts to a city she didn’t know.

In late October 1929 the stock market crashed and fortunes were lost. Panic seized the stock exchanges. Rough seas, a perfect storm – what an unlucky time for Christopher to be born on Friday the 13th of December. It must have been a bittersweet day for his parents, already separated. Isabella soon returned to Quebec with her little boy.

John must have been a restless man, moving constantly in the Depression era. After serving in the Second World War, he worked for the Department of Veteran Affairs and settled down in the Beach, living in apartments along Queen Street East and finally in the 1970s on Silver Birch Avenue, right across from St. Aidan’s Church. He was a church warden in 1946 and wrote a history of St. Aidan’s for its 50th anniversary in 1957. John took a keen interest in local history, writing about the church’s humble origins in a tent.

“In those early days living conditions at Balmy Beach – annexed to the City of Toronto in 1909 – were pretty rugged. For a long time there was no electricity or inside plumbing.”

John was never part of Christopher’s upbringing, but he was very proud of his son. Attending a performance of Henry V at Stratford in 1956, John felt, “It was a thrilling experience for me all around.”

Maybe the apple doesn’t fall far from the tree. Father and son enjoyed wine, women and song, but mellowed later in life. Christopher regrets that he “neglected” his own daughter Amanda: “I was a lousy husband and an even worse father … I was never there.”

We all carry within us a part of our family and cultural history. Through chance and circumstance the world was given a great actor in 1929. Remember Father’s Day on June 21.

The last words go to the star, Christopher Plummer, who was close friends with Raymond Massey (East of Eden), a schoolmate of John’s at Upper Canada College:

“I have often secretly thought of Ray as the likeliest candidate to play the real-life father I never really knew.”

“He was a nice guy really – I was beginning to quite like him – another time – ah well – it was too late and we both knew it. Our paths would cross once or twice again in our lifetimes and then no more …”
~ from In Spite of Myself