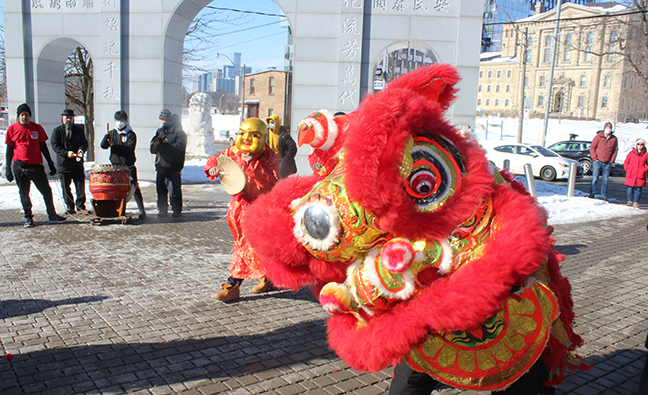 A Lion Dance takes place at the Zhong Hua Men Archway on Gerrard Street East during last year's Lunar New Year celebrations. A Lion Parade setting off from the Archway is planned on Jan. 29 as part of the celebrations surrounding Lunar New Year which officially arrives this weekend. File photo by Beach Metro Community News.

The Year of the Tiger is coming to a close as the lunar calendar moves on to its fourth year in the zodiac calendar—the Year of the Rabbit.

To celebrate, East Toronto residents are invited to come together at the annual Lion Parade in East Chinatown in the Gerrard Street East and Broadview Avenue area, which takes place on Sunday, Jan. 29, exactly one week after the Lunar New Year officially arrives.

“The Lunar New Year is vitally important to the Chinese community as it brings family and friends together to celebrate the end of one year and the prosperity of the year to come,” said Michael Grit, Centre Manager at the Chinese Cultural Centre of Greater Toronto in an interview with Beach Metro Community News.

“It is a time to honour cultural traditions and create new memories with family and friends.”

The Jan. 29 parade, which is organized by the Chinese Chamber of Commerce of East Toronto, kicks off at noon. at the Zhong Hua Men Archway, Toronto’s first traditional Chinese archway located in East Chinatown.

The Zhong Hua Men Archway is located located in the parking lot by Gerrard Street East and Hamilton Street, one block west of Broadview Avenue.

In attendance for the Lion Parade will be Toronto-Danforth Councillor Paula Fletcher who has made regular appearances at the event since she was elected councillor for the area.

“It’s a very important day of the year,” said Fletcher. “It’s also just a lot of fun. We give out cards, candy, lucky money, we give out lots of things. It’s a great, happy day.”

Participants of the parade will head south down Broadview Avenue from the Archway before turning onto First Avevenue where they will head east and then back north along Boulton Aveneu to make their way back to Gerrard Street East.

There will also be Lion Dance to start the parade which includes visits to local businesses to bring them good luck according to Chinese traditions.

“There’s little lettuces that are left at the doors of businesses that participate,” said Fletcher. “It’s a good way to support these Chinatown businesses. It’s a tradition that’s been going on for decades now.”

This cycle of the Chinese zodiac calendar is a significant one to many. People born in this year  (the Year of the Rabbit) are thought to be vigilant, witty, quick-minded, and ingenious.

The Year of the Rabbit, according to Chinese culture, symbolizes longevity, peace, and prosperity. The coming year is predicted to be one of hope, something many may have been longing for during these recently trying times.

People who share the zodiac signs of the Ox, Tiger, and Snake will also be expected to experience much luck this coming year.

Along with China, the Lunar New Year is also celebrated in other countries such as Vietnam, Korea, Singapore, and Malaysia. Although some of the traditions are shared amongst these nations, celebrations are unique to each country’s cultural identity.