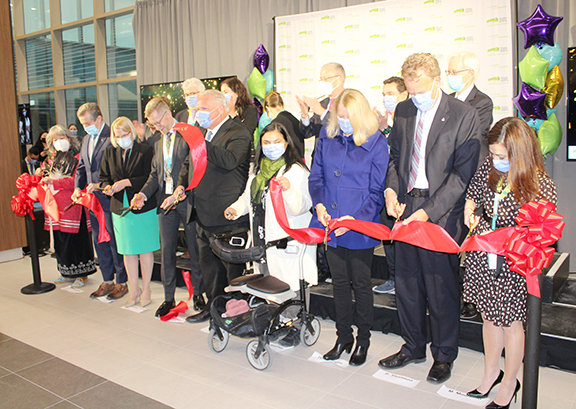 Dignitaries cut the ribbon at the grand opening ceremony for the new Ken and Marilyn Thomson Patient Care Centre at Michael Garron Hospital on Wednesday, Jan. 11. Photo by Alan Shackleton.

“Our team has worked tirelessly in partnership with funders and partners to bring this transformational project to life,” said Klassen in his opening remarks.

The Thomson Centre, which adds 550,000 square feet to the hospital, was a true collaborative effort.

As McCallum said, the project transcends politics as, since it began, the hospital experienced three different CEOs, eight Board Chairs and two different government regimes who all had the same vision and passed the torch down the line to eventually reach this moment.

The grand opening marked a historic milestone in MGH’s $560 million campus transformation which, according to a press release, is “the largest redevelopment project since its inception”.

It was also revealed during the celebration that the Heart of the East fundraising campaign, which launched in 2018, exceeded its $100 million goal and raised $126 million to support redevelopment, new equipment, innovative programs, staff training and development, and community-based research at MGH.

The Thomson Centre didn’t aim to add more beds to the hospital, rather it replaced some of MGH’s more outdated patient care spaces. The hospital first opened in the community as Toronto East General Hospital in 1929 with 110 patient beds.

“This is going to be a great thing for the east end and we’re doing the same thing right across the province,” said Premier Ford.

He told guests at the event that there is over $40 billion being invested into upgrading many facilities across the province.

“Nothing’s better than having a great facility and making sure that the healthcare system—the frontline doctors and nurses—have the tools that they need to provide great service,” said Ford.

The Thomson Centre provides such tools.

The eight-storey building boasts 215 inpatient beds and two levels of outpatient clinics. During construction, there was emphasis applied to privacy with 80 percent of the beds being in single rooms, allowing recovering patients to enjoy the advantages of privacy.

Rooms shown to the media were calm-inducing, more spacious than the average Toronto room, and with large windows that perfectly displayed the city skyline while simultaneously creating a bright, positive environment.

“Eighty percent of outpatient visits will take place in this new building where two levels of conveniently located clinics will help people to move from appointment-to-appointment with greater ease,” said Klassen.

Yaakov Keilikhis, Director of the Mental Health and Substance Use Program, took Beach Metro Community News on a tour of the Adult Mental Health Unit. The space includes a kitchen which will be used for group activities such as ones that helps patients sharpen their cooking and household skills to better equip them for life outside the hospital.

Although patients can enjoy group activities, Keilikhis said that the best recovery and healing occurs when there’s “separation between group activities and private spaces”, a philosophy that the Mental Health Unit successfully encapsulates.

Other units include a 45 person surgery inpatient unit that consists of both single and double-occupancy patient rooms; a chronic diseases outpatient unit; Carswell Family Centre for Medical Education which provides training for future medical professionals; and a new retail spaces as well as two outdoor terraces that staff, patients and visitors can utilize.

MGH also incorporated new technologies to make it easier for staff to communicate and provide quality service for patients as well as a simulation centre which will be utilized for hands-on, immersive training for staff and learners.

Members of the community have welcomed this new facility with warm embrace as for many years patients have craved a better experience especially in areas, like chronic diseases, that are disproportionately represented in East Toronto in comparison to the rest of the city.

“It’s comforting to know that if any of us in the family or community needs care, we can go [to the Thomson Centre] and rest assured that we will be taken care with the proper nurturing that an individual needs,” said Razia Rashed, a patient and community member. “It is very inspiring to see how MGH is providing that care and giving us hope for a better life.”

The facility was named after Ken and Marilyn Thomson who were lifelong Toronto residents and well known for their philanthropy.

“I know they’d be really happy with this building and the way it turned out,” said Peter Thomson about his late parents.

“We got involved over 10 years ago and had high hopes for what this building could be but I think it exceeded every expectation we ever had. I know my parents would be very proud and honoured to be a part of the building.”

Peter and Diana Thomson have committed a total of $17.5 million to the hospital’s redevelopment.