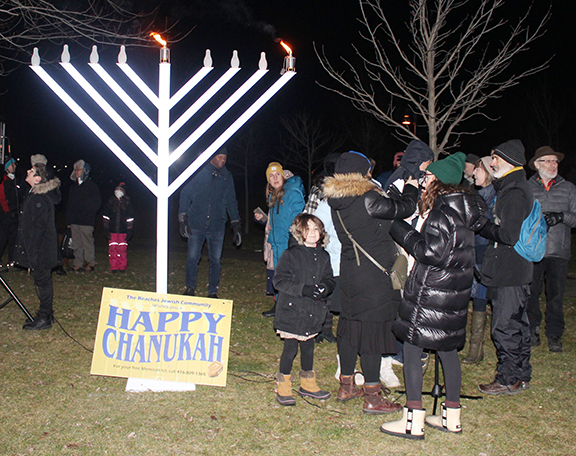 Residents gathered together to light the first candle of the Menorah on Sunday, Dec. 18, at the Queen Street East entrance to Woodbine Park. Inset photo, David Brown and Rabbi Sholom Lezell light the candle. Photos by Alan Shackleton.

Members of the Beach community joined together to take a stand against antisemitism and to light the first candle on the Menorah to begin the eight-day celebration of Hanukkah on the evening of Sunday, Dec. 18.

The location of the Menorah at that site was chosen in response to an antisemitic incident that took place in front of the Toronto United Mennonite Church, 1774 Queen St E., on the morning of Tuesday, Dec. 13.

Antisemitic graffiti had been written on the sidewalk in front of the church.

That incident prompted the Chabad Danforth-Beaches to decide to have a Menorah placed in the park, almost across the street from the church, and to invite the entire community to join them in lighting the first candle of Hanukkah.

“This is a chance for us to recognize the support of the community which we are so proud of,” Rabbi Sholom Lezell told Beach Metro Community News prior to the lighting of the Menorah.

“We have had such a tremendous outpouring of support since this (the antisemitic graffiti incident) happened and we are so grateful for that.”

He said such incidents of antisemitism in the community are extremely rare.

Rabbi Lezell said Hanukkah is a celebration of light over darkness and the Menorah lighting symbolizes that transformation at what is traditionally a dark time of the year, and one that was made even darker by the antisemitic graffiti written in the area.

“We have the power to change this from darkness to light, and even a small light can take away a lot darkness,” he said.

A large crowd turned out for the Menorah lighting ceremony which began at 5:30 p.m. David Brown, the owner of Fearless Meat on Kingston Road and Beach Citizen of the Year for 2022, lit the Menorah’s first candle along with some help from Rabbi Lezell.

Also at the Sunday ceremony was Pastor Peter Haresnape from the Toronto Mennonite Church and some of its members.

Nobody knows why the antisemitic words were written on the sidewalk in front of that church.

“We were so sorry to see this on the sidewalk and our church would like to respond with an outpouring of love and solidarity, and we want you to know we have your back,” he said at the Menorah lighting.

Beaches-East York MPP Mary-Margaret McMahon and Beaches-East York MP Nathaniel Erskine-Smith also spoke at Sunday’s ceremony. They both talked about the importance of standing up against hate and racism and how light triumphs over darkness.

Rabbi Lezell also thanked Beaches-East York Councillor Brad Bradford and the Toronto parks department for moving quickly to get the necessary permits for the setting up of the Menorah in Woodbine Park in response to the Dec. 13 incident.